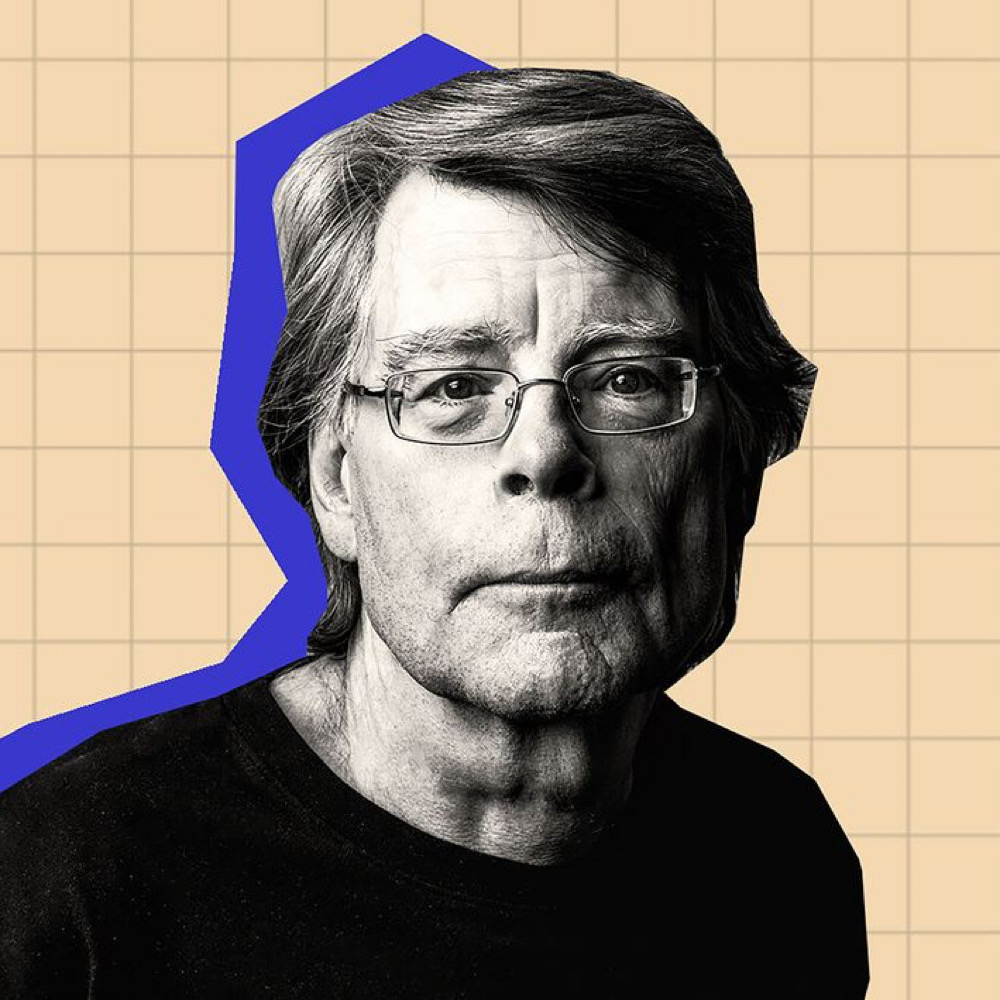 Before Stephen King gets out of bed at 6 a.m., he makes a mental inventory of the things he’s grateful for. “It’s a nice way to start the day because you get a chance to almost do a review of your current life, your current status,” says Stephen King, 73, who reportedly has a net worth of $500 Million according to Celebrity Net Worth, to WSJ. Magazine. His family, friends and dog—a corgi named Molly, whom he also refers to as the Thing of Evil—are mainstays of his list. “I try to remember to be grateful for not being in pain, you know? Because everybody has some of that in their life.” Next, he gets up and does a round of sit-ups and push-ups, shaves and eats breakfast before sitting down to write.

During his five-decade career, King has published over 60 novels and 200 short stories that mostly fall into or combine the genres of horror, suspense and science fiction and fantasy. His 2000 book On Writing, a memoir and how-to guide for aspiring authors, recounts how he and his brother, David, were raised by their single mother, frequently moving to different cities across the country. In 1966, King went to the University of Maine, working various jobs to pay tuition, including janitor and gas station attendant. He met his wife, the author Tabitha King, at the university’s library. After graduating, he started selling short stories to magazines while teaching high school; he published his first novel, Carrie, in 1973. He and Tabitha have three children: Naomi King, 51, Joe Hill, 49, and Owen King, 44.

Among the many TV shows and films based on King’s books are “Carrie,“ “The Shining” and “The Shawshank Redemption.” His favorite book he’s ever written recently joined the list; “Lisey’s Story,” an Apple TV+ series directed by Pablo Larraín, premiered on June 4. In Lisey’s Story, Lisey Landon, played by Julianne Moore, is a widow grieving the death of her husband, Scott, a famous novelist (Clive Owen). While cleaning out Scott’s papers, Lisey is contacted by a threatening fan of Scott’s who eventually begins to stalk her; she also starts to remember parts of her marriage that she had repressed. King, who often leaves the adaptations of his work to other writers, wrote the script for the series. “Call me a sap, call me a sucker if you want, or soft or spongy, but I like a love story,” Stephen King says to WSJ. of his affinity for the book. “But it has to be good, it can’t be too corny.”

Here, Stephen King talks to WSJ. about his love of Diet Pepsi and why the pandemic will change fiction going forward.

Here are some things Stephen King revealed to WSJ. Magazine…

On the amount of sleep he needs:

I usually get about six hours a night, sometimes seven. But I also try to take a nap in the afternoon, about an hour. So I’m going to say I get maybe seven and a half hours of sleep in a 24-hour period.

On being a coffee or tea drinker:

I’m a Diet Pepsi drinker. I drink tea. I hate coffee, so I don’t do coffee.
I usually have something to drink close at hand. It might be a Diet Pepsi or it might be just water, that LaCroix water, you know, that has the bubbles in it.

On his favorite La Croix flavor:

You’ve got to have the cranberry flavor, really. I’m just saying.

On the time of the day or week that he’s most creative:

It’s always mornings. If I’m under the gun, I can work later in the day. But my sweet spot is from 8:30 in the morning to 12:30 in the afternoon. I feel really good at that time. I’ve usually had a walk by then, treadmill, something like that, to get the endorphins flowing a little bit. And then I feel good to go.

On how his writing routines have changed over the years:

I used to have a straight job, I worked as a schoolteacher for awhile when I was first married. It was catch as catch can…because then I’d come home and grade papers. I used to live for vacation weeks because I was able to write in the daytime rather than at night when I was feeling a little bit as though my battery had been on all day long. I would say the nicest thing about being able to do this for a living is I have my time. It’s like Pavlov’s dogs that salivate when you ring a bell: When it gets to be 8:30 in the morning, I feel like I ought to sit down and do some work.

On his preferred surroundings when he writes:

I have an office and a door that I can shut. Usually the dog sits at the foot of the desk, and I just work there. It’s pretty ordinary, really, it’s just this big messy desk, and I have a desktop computer that I work on. The shades are down because if I look at the outside world too much, I lose the inside world.

On why he was more hands-on with Lisey’s Story adaptation than usual:

I love that book. I held onto it. There were offers to do it as a film or as a limited series in the earlier days of Netflix. The issue would come up, and I always said no because I wanted to do it myself if I could, if the time seemed right for that. The streaming thing is so wonderful because there are no ads to break the mood, to break the dramatic build of the story with dancing toilet bowls or something like that. And you don’t have to cut the thing perfectly so that it fits in a little 42-minute box so the next show can come up. You’re given a little more space, a little more room. I love that, I thought it would be a perfect medium for Lisey. And that’s the way it turned out in my humble opinion, as they say, IMHO.

On what gets him excited about ideas for a story:

It’s always different. I’m trying to think of what it was with Lisey’s Story…. I’ll tell you what it was. I had pneumonia. It was serious, and I was in the hospital for a couple of weeks with it, and I almost died. And my wife decided once she knew that I was going to get better that she was going to redo my office and clean it out completely and reconfigure the furnishings and everything, so I’d have a nice place to come back to. When I came back, that work wasn’t done, and I was very shaky on my feet and skinny and still taking various medications and trying to get better. And she said to me, Don’t go up there, you won’t like it. So of course, I went up there…and I looked around at this big empty room and I thought, This is what it would be like if I died. Everything would be cleaned out. That was really the kernel of the story.

On whether he will write about the pandemic:

In a way, I already did. I wrote a book called The Stand, which was about a superflu bug that gets out of control. We’re all going to have to deal with the pandemic eventually. Right now, when I read new fiction, it’s as though the pandemic didn’t happen because the books that I’m reading now were all being written before it hit. I’m waiting for someone to write a great novel called Love in the Time of Covid. There are going to be books about it, there’s going to be a lot of nonfiction about it. But in a way, nonfiction is easy because it’s fact. But when you deal with the actual time, like March of 2020 to April of 2021, life changed a lot and stories are going to have to reflect that. How that’s going to happen, I don’t know.

On whether he ever gets writer’s block:

I read something the other day that was funny. Somebody said writer’s block is for amateurs. Do I get writer’s block? I had it once. This is like saying I had pneumonia once. The thing is, I don’t outline, I don’t have whole plots in my head in advance. So I’m really happy if I know what’s going to happen tomorrow, which I do, as a matter of fact, I know what’s going to happen in the novel I’m working on. And that’s enough.

How To Rock Puffy Sleeves In Full Pomp And Poise: 30 Looks + Styling Tips!