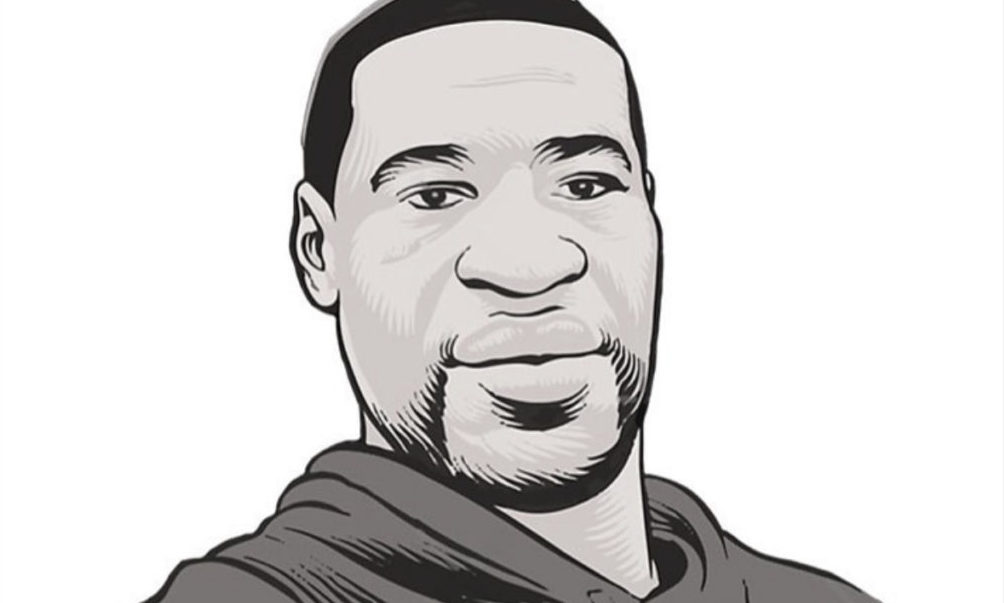 George Floyd, an unarmed 46-year-old Black man, died last Monday after a white officer used his knee to pin Floyd’s neck down to the ground for several minutes following his arrest. In videos recorded by witnesses, Floyd can be heard repeatedly pleading with officers, saying “I can’t breathe.”

He eventually stops moving with the officer’s knee still on his neck. The death of George Floyd has led to a series of protests since Monday. Here are news updates you should see. George Floyd News

In the wake of immediate outrage in Minneapolis, the bus stop at the site of Floyd’s murder on Chicago Avenue became a makeshift memorial throughout May 26, with many placards paying tribute to him and referencing the Black Lives Matter movement. As the day progressed, more people showed up to demonstrate against Floyd’s death. The crowd, estimated to be in the hundreds of people, then marched to the 3rd Precinct of the Minneapolis Police. Protesters were seen displaying posters and slogans with phrases such as “Justice for George”, “I Can’t Breathe”, and “Black Lives Matter.”

Massive protests broke out across the United States on Tuesday as anger over the death of George Floyd intensified. Later, some protesters would gain access to a police precinct in Minneapolis, Minnesota, setting sections of the building on fire. 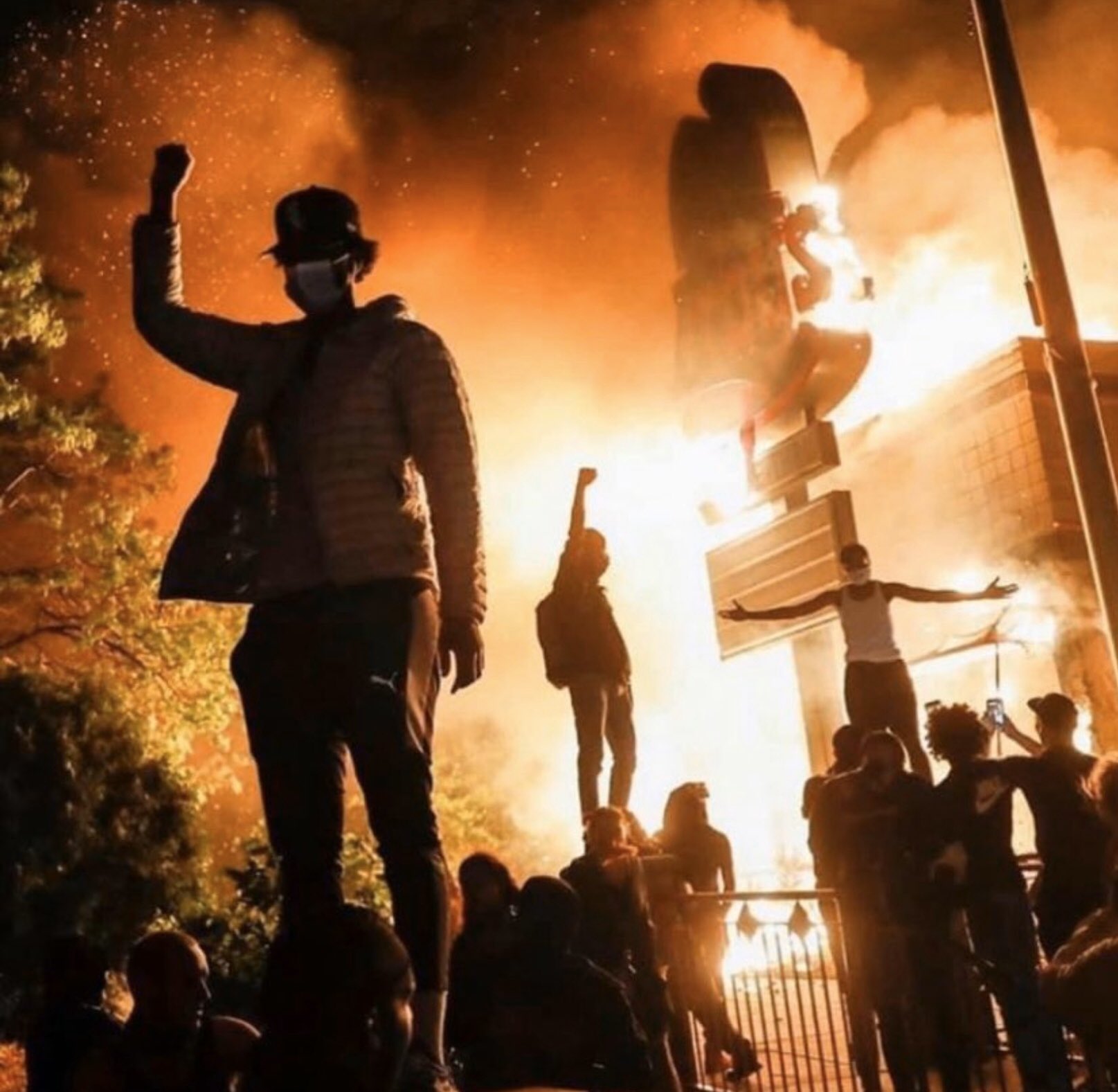 Philonise Floyd, the brother of George Floyd, says he just wants justice. Philonise said the protesters “have the same pain that I feel.” “I want everybody to be peaceful right now but people are torn and hurt because they’re tired of seeing Black men die constantly, over and over again,” Philonise told the media.

President Donald Trump sent his condolences two days after the murder of George Floyd via Twitter, saying he’s requested the FBI to conduct a thorough investigation. He added, “My heart goes out to George’s family and friends. Justice will be served!” Trump also described Floyd’s death as “sad and tragic”. However, true to form, he sparked controversy following the publication of a tweet on May 29 that read, “These THUGS are dishonoring the memory of George Floyd, and I won’t let that happen. Just spoke to Governor Tim Walz and told him that the Military is with him all the way. Any difficulty and we will assume control but, when the looting starts, the shooting starts. Thank you!” A week later, on June 1, President Trump threatened to deploy the military to stop the protests. George Floyd News

US First Lady Melania Trump tweeted her condolences to the family of George Floyd and called for peace. “Our country allows for peaceful protests, but there is no reason for violence,” she said.

Presidential hopeful, Joe Biden, representing the Democrats, said on Twitter he was furious about Trump’s tweet glorifying violence against protesters in Minneapolis.

More outrage as a Black CNN reporter gets arrested 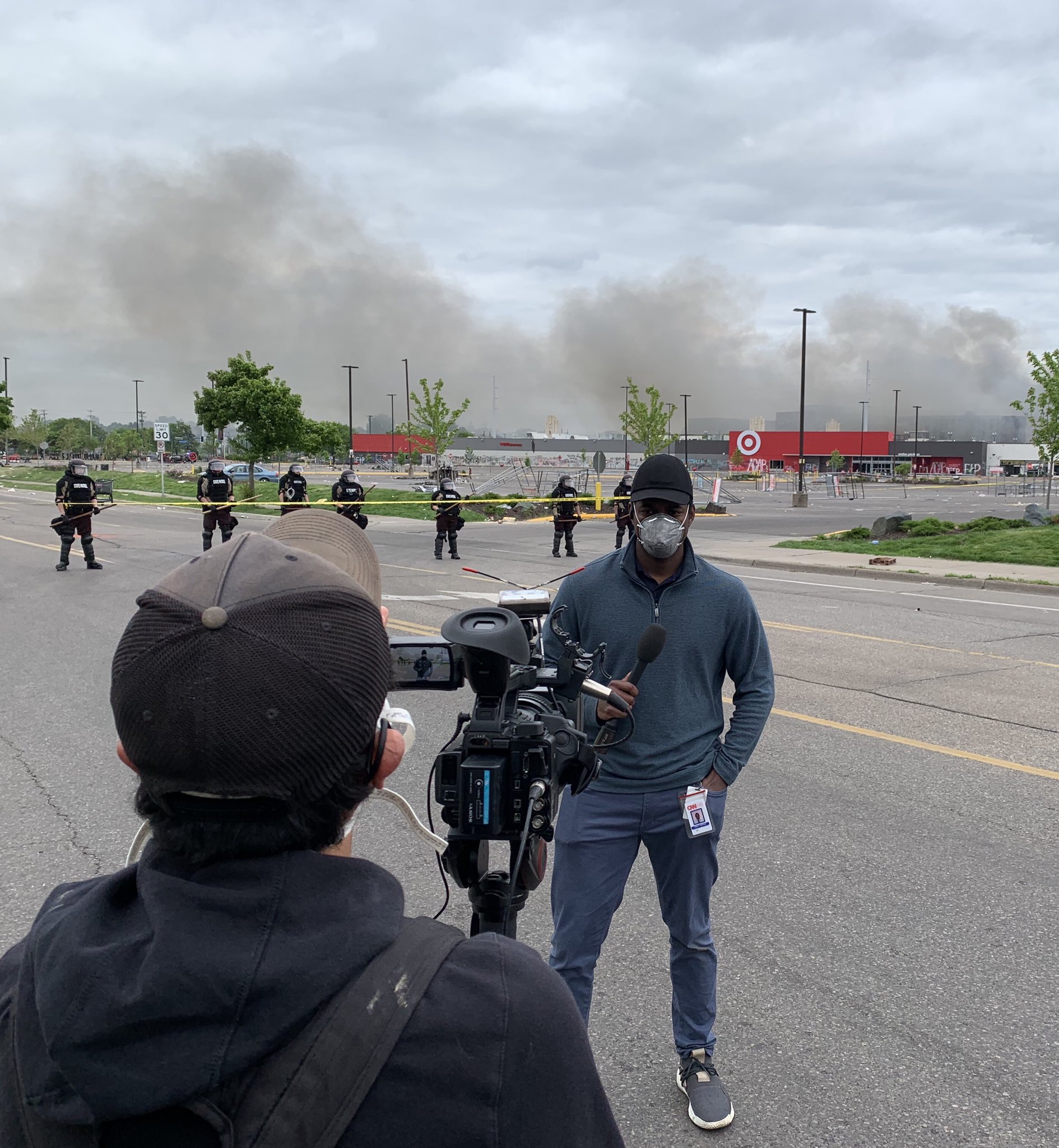 A black CNN reporter, Omar Jimenez and his crew who were working on-scene of the riot in Minneapolis were unjustly arrested by the police on-air but later released. This further fueled the people’s anger and massive protests continued to spread across the U.S.

Minnesota Governor Tim Walz said he expects swift justice for Floyd. Walz also publicly apologized for the arrest of the CNN crew. The arrest was condemned by Dorothy Tucker, president of the National Association of Black Journalists (NABJ) who offered help to Omar. 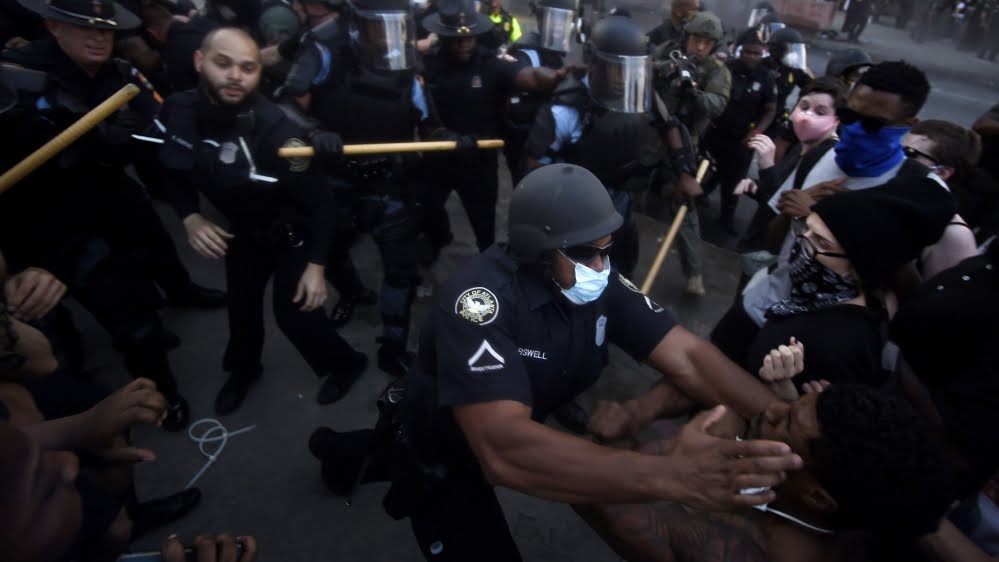 On May 29, 2020, former President Barack Obama issued a statement on Floyd’s killing via Twitter. Obama cited conversations with friends in recent days, including one with an African American business owner who said Floyd’s killing hurt to watch.

My statement on the death of George Floyd: pic.twitter.com/Hg1k9JHT6R

May 29, 2020––Hennepin County Attorney Mike Freeman said the fired police officer who knelt on Floyd’s neck had been taken into custody and charged with third-degree murder and manslaughter. Minneapolis residents called the arrest a good first step but demanded the three other officers involved be arrested and charged as well. Freeman said those officers are still under investigation.

On May 26, 2020, an autopsy was performed on Floyd by the Hennepin County medical examiner. The preliminary autopsy “revealed no physical findings that support a diagnosis of traumatic asphyxia or strangulation,” but found that Floyd suffered from coronary artery disease and hypertensive heart disease. The report also stated that “combined effects of Mr Floyd being restrained by the police, his underlying health conditions and any potential intoxicants in his system likely contributed to his death.”

Following the release of the autopsy result of George Floyd by the state, the family of the deceased released a statement through the civil rights attorney, Ben Crump, who’s representing them. The family chose to pursue an independent autopsy to be carried out in Minneapolis.

According to the family,

“We are not surprised yet we are tragically disappointed in the preliminary autopsy findings released today by the medical examiner. We hope that this does not reflect efforts to create a false narrative for the reason George Floyd died,” said civil rights attorney Ben Crump. “Attempts to avoid the hard truth will not stand, and on behalf of the family, we are fiercely committed to bringing the truth to light.”⁣
⁣
“What we know is clear: George Floyd was alive before his encounter with police, and he was dead after that encounter. We believe there is clear proximity between the excessive use of force and his death,” said Antonio Romanucci, Founding Partner of Romanucci & Blandin, LLC and Co-Counsel in this case.⁣

On June 1, 2020, experts hired by George Floyd’s family revealed the results of their independent autopsy saying that Floyd died of “asphyxiation from sustained pressure” when his neck and back were compressed by Minneapolis police officers during his arrest last week. The pressure cut off blood flow to his brain, that autopsy determined.

A final autopsy is released

Soon after, on the same day, the Hennepin County medical examiner issued a press release of the autopsy’s “final findings.” It classified Floyd’s death as a homicide, caused by “a cardiopulmonary arrest while being restrained” by law enforcement. It was noted that law enforcement subjected Floyd to “subdual, restraint, and neck compression.” It lastly noted other “significant conditions”: arteriosclerotic heart disease, hypertensive heart disease, fentanyl intoxication, and recent methamphetamine use.

The medical examiner’s final report did not, however, mention asphyxiation as a cause of death. George Floyd News

Hundreds of people have converged on the White House for days and marched along the National Mall, chanting “Black Lives Matter,” “I can’t breathe” and “No justice, no peace.”

Protesters gathered outside the White House demanding an end to police violence and protesting against Trump, who has been accused of inciting and glorifying violence.

On May 29, 2020, the White House went into a brief lockdown after hundreds of people gathered at a park across the street from the president’s mansion. The lockdown was lifted about an hour later.

Amid images and videos of clashes and protests, photos, and videos of a blacked-out White House went viral on social media early Monday, June 1. A Twitter user shared an image of the White House with lights out at #WhiteHouse, calling it “a powerful symbol.”

Lights out at #WhiteHouse is a powerful symbol. Total lack of leadership from @realDonaldTrump #BunkerTrump pic.twitter.com/pJTUYA3trT

Minutes after speaking in the Rose Garden about the importance of “law and order” to quell the unrest over the killing of George Floyd by Minneapolis police, Trump walked across the street to St John’s Episcopal Church, where every American president since James Madison has worshipped. George Floyd News

But not before police used teargas and force to clear the streets for Trump’s photo opportunity.

Protests continue across the country

Protests against police brutality on Black people have sprung up in more than 100 cities. Over 12 states have called up the National Guard, and at least 12 major cities have imposed curfews due to looting and violence happening as by-products of the protests. George Floyd News

Demonstrators have taken to New York City streets for days in protest over the death of Floyd and other Black people who died at police hands. 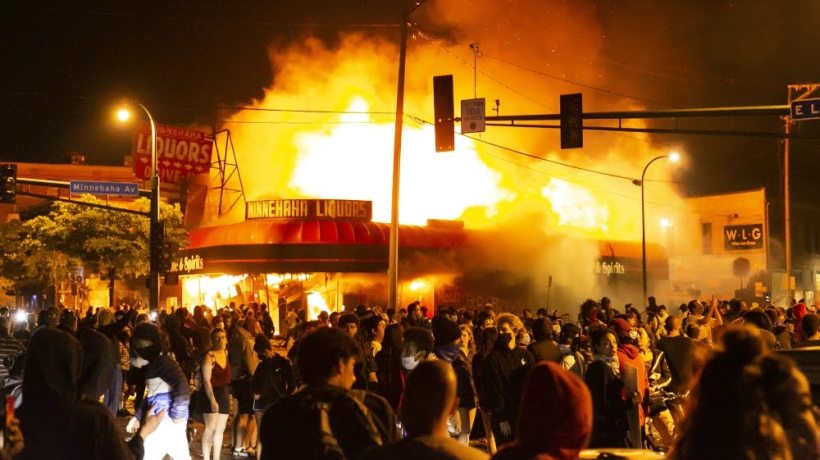 Hundreds of people have protested for days in downtown Louisville, Kentucky, with some demonstrators breaking into the city’s Hall of Justice and starting a fire inside.

The mayor of Nashville, Tennessee, declared a state of civil emergency after protesters set a fire inside the Metro Courthouse in the state’s capital city. Police have arrested about 1,400 people in 17 US cities as protests continue over the death of George Floyd. 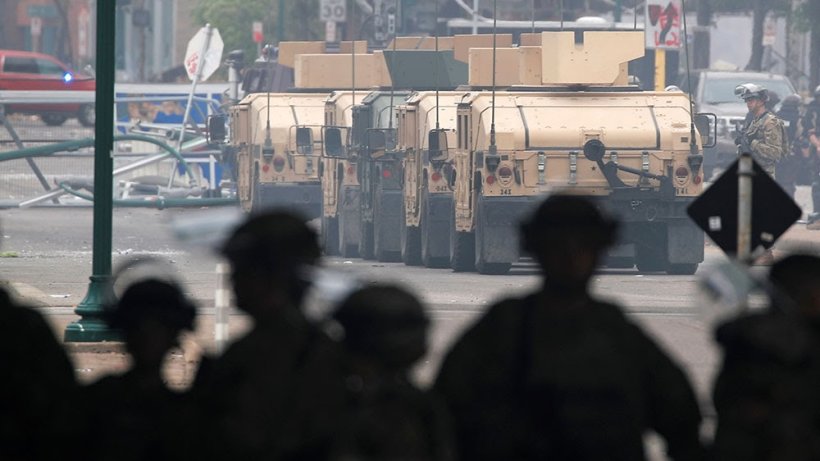 Some 350 officers of the Minnesota National Guard and local police have deployed to enforce a curfew in Minneapolis, warning protesters they will be arrested if they refused to leave the city’s Fifth Precinct area. The Pentagon also ordered the army to put several active-duty US military police units on the ready to deploy to Minneapolis.

Among many injured while protesting or manhandled by the police, a 19-year-old man was killed in Detroit, Michigan, after someone in an SUV fired shots into a crowd of people protesters. A number of police officers have also been attacked during the nation-wide protests.

Some journalists and celebrities who were out working and rallying, respectively, were shot at by the police with rubber bullets. On Friday night, photojournalist Linda Tirado was shot in the eye with a rubber bullet while covering an anti-police brutality protest in Minneapolis. She is now permanently blind on that eye. Police allegedly targeted the journalists. 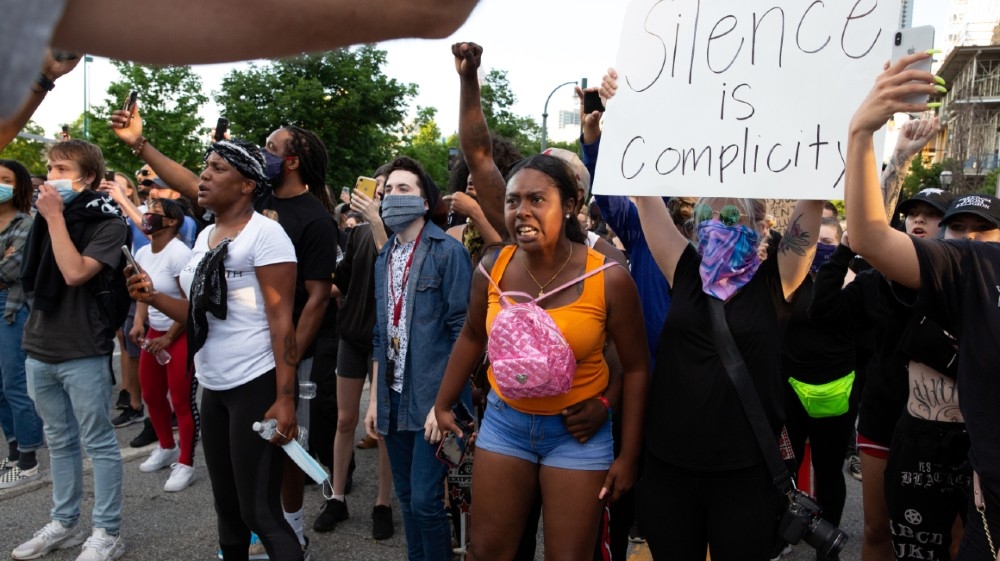 Protesters said they had to take to the streets to protest against police brutality despite the dangers associated with the coronavirus pandemic. “It’s not OK that in the middle of a pandemic we have to be out here risking our lives,” a protester said.

It seems the COVID-19 pandemic is not the only one crippling America right now. Racism is another pandemic America has to fight. George Floyd Updates

Read more of the latest updates as they break on CNN