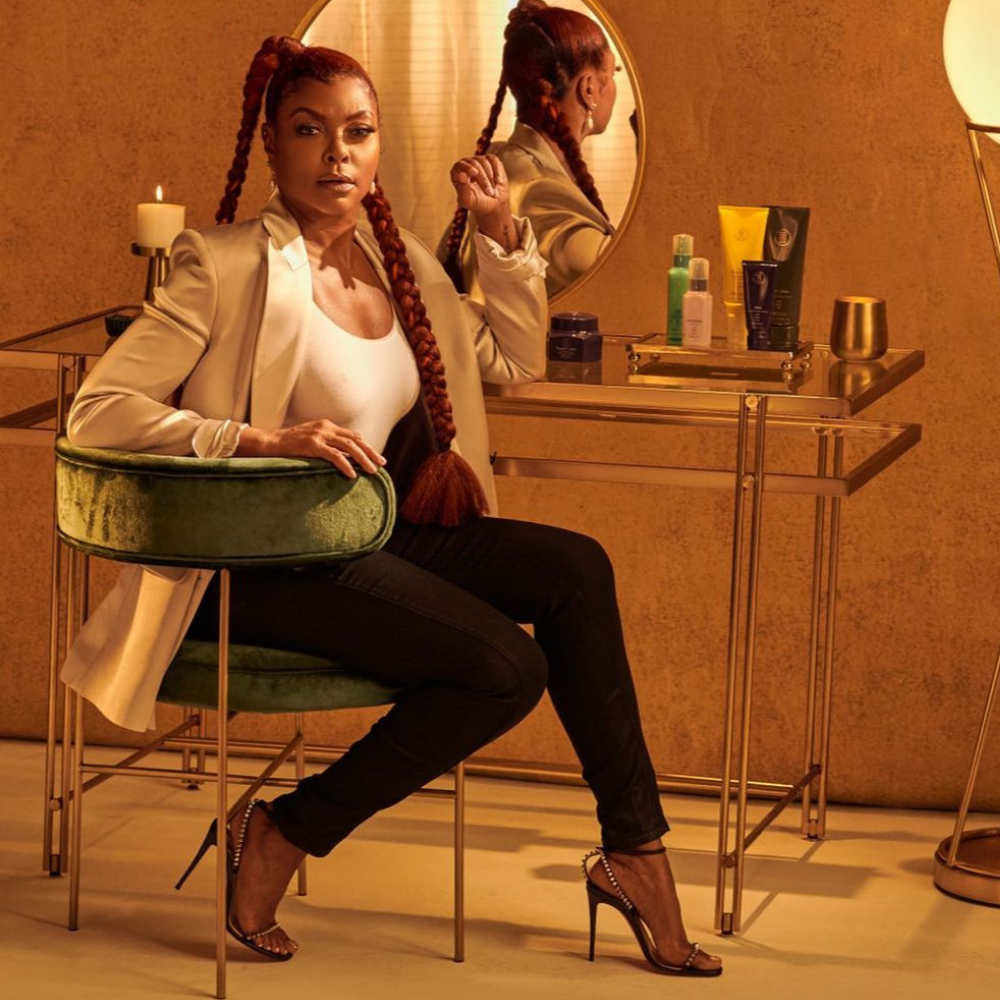 Taraji P. Henson hasn’t worked as an actor in almost a year. Best known for portraying Cookie Lyon on Empire—for which she’s won a Golden Globe, a Critics’ Choice Award, and four NAACP Image Awards—Taraji P Henson, 50, has also starred in movies like What Men Want, Hidden Figures, and The Curious Case of Benjamin Button.

But the pandemic has meant taking time off. The upside to not being on set has been learning how to live a quieter life: “I don’t know how to sit down, I don’t know how to not work. This was the only thing that was going to…give me this time I needed.” Still, she hasn’t stopped working entirely.

At the beginning of last year, she launched a hair-care line, TPH by Taraji, based on scalp-relief remedies she used to make herself. She continues to work on expanding the line from the private beauty salon inside her Hollywood Hills home. “These products go through heavy scrutiny,” she says. “I’m a Virgo.” She’s also continued to change up her own look; she’s made headlines this past year for dyeing her hair red and, more recently, hot pink. Taraji P Henson.

Here are some of what Taraji P. Henson revealed to WSJ. Magazine…

What time do you get up on Mondays, and what’s the first thing you do?

The first thing I do is take my dog out. It takes a minute for him to stretch out, you know, French bulldogs, they don’t like waking up. So while he’s getting it together, I’ll go get my hot water and I put [in] my sea moss and my lime. That’s my morning coffee if you will. Then I’ll work out. That’s always a good start for me. And then depending on if I have Zoom calls or not, I prepare for those. If not, then I make my way out to my salon and I have fun creating in here, trying to keep my sanity. Taraji P Henson.

What do you do for that workout?

I’m grateful for my assistant because she added something really new to my regime. At first, my trainer was coming to the house, but the [rate of infection] numbers got so crazy and I just didn’t feel comfortable with that. So I needed other equipment that would train me like my trainer. I fell in love with this boxing machine, Nexersys.

You know how they have those sponsored pages on Instagram? The algorithm knows me well, the algorithm knows they’re going to get my money. Sure enough, I sent it to her, she got it for me for Christmas. So after I do my 20-minute warm-up, I get to boxing. And I love it because it’s got a trainer on there. Not personal, but you can go on-demand and you can do cool work, and it’s just you and the video trainer.

And when it comes to sleep, are you one of those “four hours a night is all I need” people, or do you need a minimum number of hours to recharge?

Is that a pandemic sleeplessness thing?

I think so. You’ve got to remember, I was a workhorse before this thing happened. I was on a show for six [seasons] and even though Empire was ending, my whole summer was slated. I had no time for a vacation. I was working all throughout the summer, and then the pandemic hit. So you’re talking about someone who worked, worked, worked all the time, and now—nothing? It’s OK because I’m finding the joy in it.

What have you found to be the upside to having so much more free time?

Enjoying my house. I’m never here; I haven’t lived in my house for six years. I had the salon here, but it was bare bones. It had nothing in it. It was supposed to be just for my glam squad, but it ended up being my saving grace. It’s saved me throughout this pandemic because I filled it up with all the things I always wanted. I have my hair products in here. I look like I’m someone who really owns their own hair brand!

You are! I was going to ask, you launched TPH by Taraji shortly before the pandemic—have you had to change your business plan at all in light of it?

Not at all, because what we’ve started out with, that was my vision. It’s always been my vision, pandemic or not. I’m about a healthy scalp. Healthy scalp, you will have healthy hair. That’s what I’ve always been about, that’s my mission, that’s what I’m sticking to. When you create a brand, you better start creating it for yourself first. It was out of necessity, the things I needed. Taraji P Henson.

I don’t watch the news, it’s too depressing. I have a friend, I’m not even lying, I have a friend who does, and she knows where to get the right news, where the fake news is, she knows. I have anxiety and it’s just too much. I’m an empath, I take it all on, and that’s why my sleeping is all screwed up. Because I have no outlet, nowhere to go and forget about it.

I can’t go on set and live in another character’s shoes for 12, 14 hours. We’re inundated with news every day because we’re at home. So I can’t do it, and I don’t. If I’m scrolling on Instagram and I start seeing too much, I put it down. When I feel comfortable enough to where I want to know, because maybe I should know something, I call my friend Mundi. And baby, she gives me the recap.

It’s either documentaries or comedy for me. I can’t watch dark. It’s dark in real life. I’ve tried to watch Your Honor, and I couldn’t do it. I think it’s great, [but] it’s too dark. I’ve been trying to watch Nate Parker’s American Skin. We’re watching people get shot every day, I don’t want to see a whole movie about it. I know it’s important what he’s saying, but I can’t stomach it right now. Taraji P Henson.