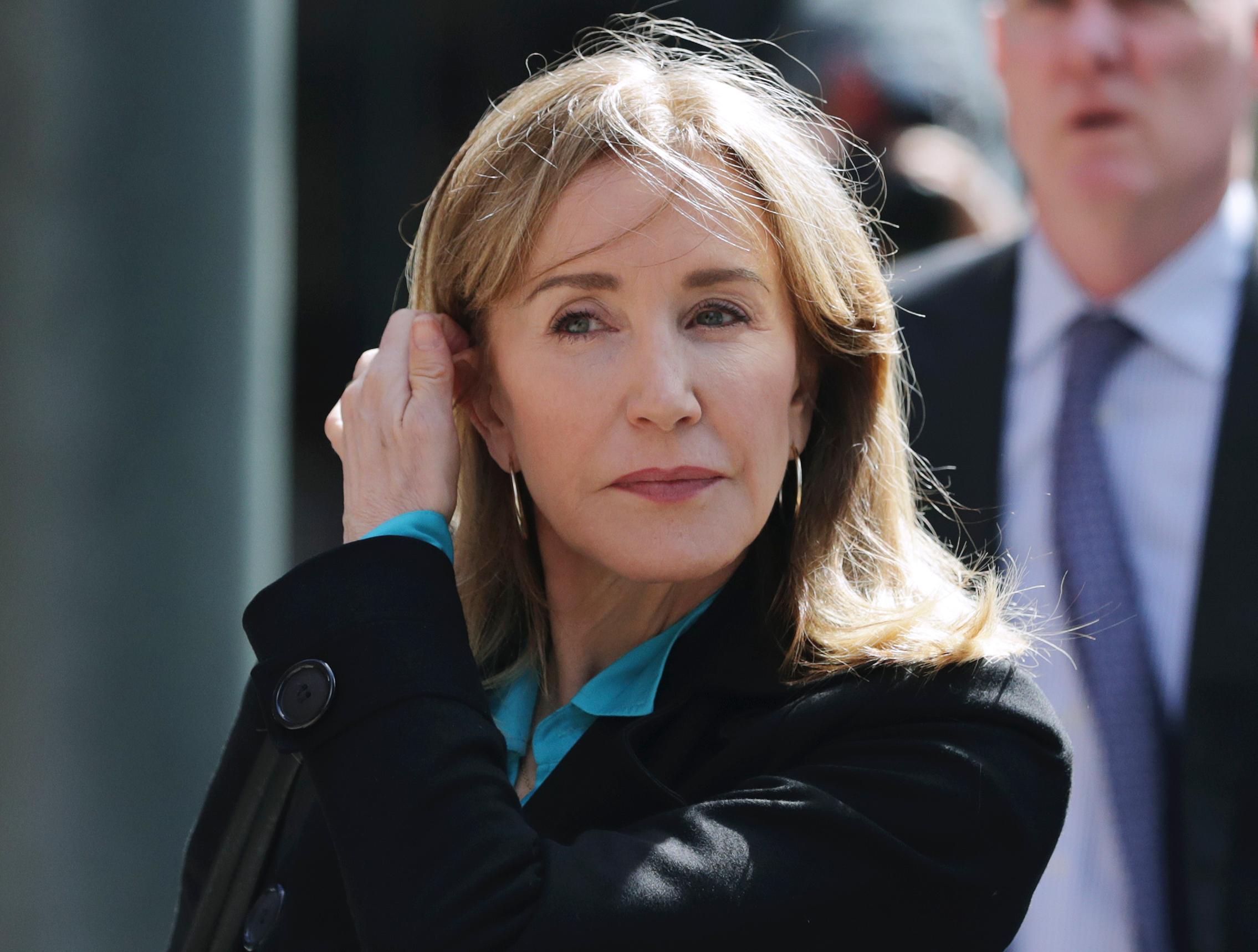 Felicity Huffman was in tears before a federal judge on Monday after pleading guilty of paying $15,000 to a fake charity that facilitated cheating for her daughter’s college admission when she took her SATs.

The charity was associated with Rick Singer, who confessed to helping wealthy parents cheat on standardised tests for their children. A criminal complaint says that Singer also bribed college coaches to falsely designate students as recruited athletes, smoothing their path to admission.

The actress is one of 13 parents who have said they would plead guilty to the scam. When she appeared in court in Boston, prosecutors had recommended a four-month prison sentence for the “Desperate Housewives” actress for her role in the college admission scandal. They also suggested a $20,000 fine and 12 months of supervised release for the felony charge.

Felicity Huffman, 56, agreed to plead guilty to conspiracy to commit mail fraud and honest services mail fraud in April. She will be sentenced September 13. Seventeen other parents, including actress Lori Loughlin, submitted not guilty pleas.

2. Is the President of Kenya missing?

Speculation went rife amongst Kenyans on social media over the Kenyan President Uhuru Kenyatta’s whereabouts after noticing he has been absent at public events. Tweeting with the hashtag #FindPresidentUhuru, they argued Kenyatta had not been seen publicly since he travelled to China in April.

The President travelled to Beijing in April to attend the second Belt and Road Forum where he met Chinese President Xi Jinping, sealing bilateral agreements with China.

Addressing the rumours, the chief spokesman for the Kenyan President, Kanze Dena, has denied the claims in a series of tweets, stating that the president was very much present but is working on several things.

“The President is around, it doesn’t mean that because he is not seen in public he is not there, he has an office where he goes every day and he is working on several things,” the spokesperson said.

She highlighted that the President was present at a meeting with international health organisation Global Fund earlier in May. She also tweeted a photo of Kenyatta in his office.

Kenyatta’s Facebook and Twitter were suspended in March so he has been notably absent from the social media platforms.

The United Arab Emirates has reported acts of ‘sabotage’ against commercial ships after four ships were targeted on Sunday near the strategic Emirati port of Fujairah.  The allegations of sabotage by Iran or Iranian backed proxies have been widespread since large holes were found in four ships anchored off the coast of the UAE.

Two Saudi oil tankers, a Norwegian flagged vessel and a bunkering tanker were all subject to attacks. The incident comes after months of increasing diplomatic and economic pressure on Iran by the US which has led to tensions rising in the region. The tension has caused the deployment of a growing number of United States assets to the Middle East.

Tehran has however distanced itself from the attacks saying the incidents were “alarming and regrettable.” It also warned against ‘plots by ill-wishers to disrupt regional security” and called for “vigilance of regional states in the face of any adventurism by foreign elements.”

The Emirati Minister of State for Foreign Affairs has said investigations on the incident were still ongoing.

At least four people have been confirmed dead in protests in Khartoum after ousted president Omar al-Bahir is charged. The violence flared in Sudan’s capital after the military council and opposition groups said they had agreed to a power structure for the country’s transition following the president’s removal last month.

Armed groups unhappy with the progress towards a political deal have been accused by the council of opening fire at protest sites.

The protests which ultimately drove al-Bashir from power after almost 30 years in power, were still being held outside the army headquarters in central Khartoum with the aim of forcing the council to cede power to civilian rule.

Box-office queen and singing sensation, Doris Day, has died. Her foundation made the announcement on Monday. According to them, the actress passed away early Monday surrounded by a few close friends at her Carmel Valley home.

It was revealed that she had been in excellent physical health until she contracted a serious case of pneumonia.

The actress who died at the age of 97, was arguably the top female box-office star in Hollywood history with a No. 1 ranking in 1960, 1962, 1963 and 1964. Her first break as a big-band vocalist came during World War II before making almost 40 movies in the next two decades.

She reigned supreme at a time when her contemporaries included Audrey Hepburn, Marilyn Monroe and Elizabeth Taylor.

The singer turned actress starred in films such as Calamity Jane and Pillow Talk and had a hit in 1956 with Que Sera, Sera (Whatever Will Be, Will Be).