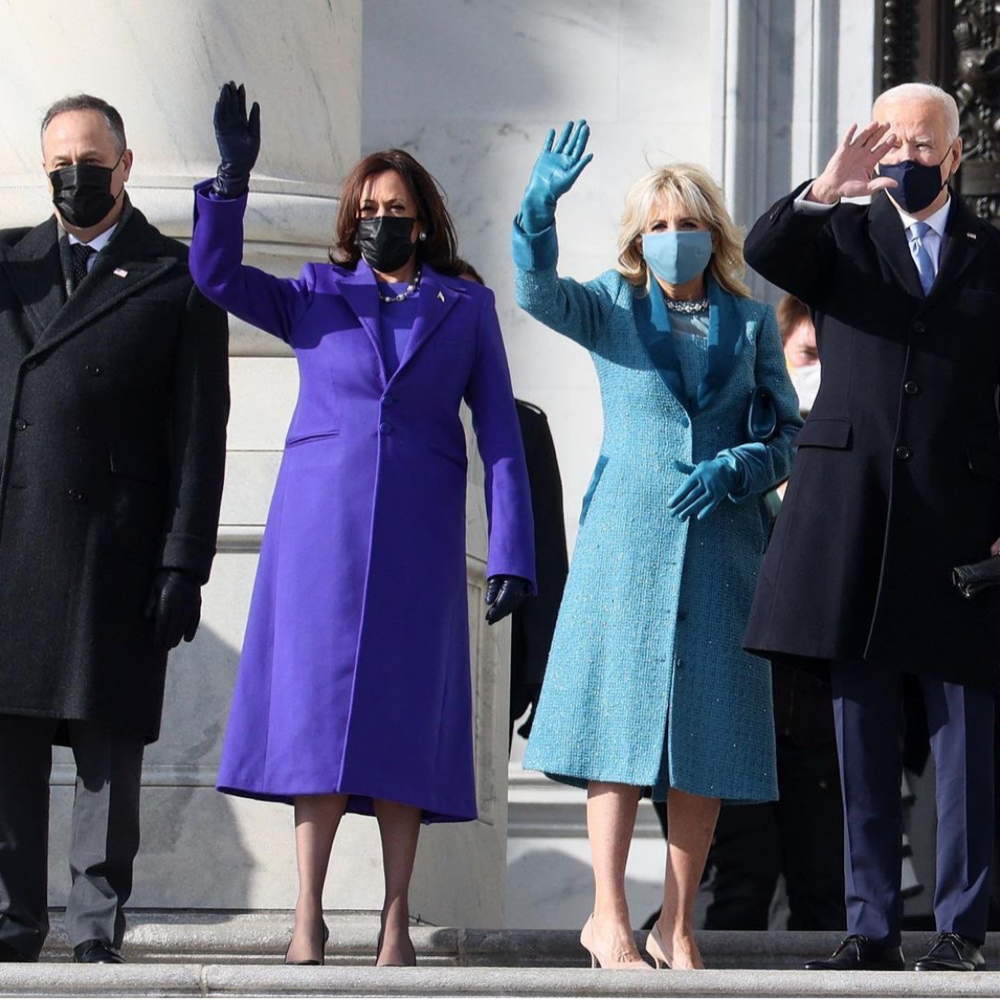 At noon today, January 20, Joe Biden and Kamala Harris were sworn in as the 46th President and Vice President of the United States. The ceremony held at The Capitol,  which was infiltrated exactly two weeks ago by a terrorist mob. The Inauguration ceremony featured Lady Gaga who sang the national anthem as well as Jennifer Lopez,  who sang ‘This Land is Your Land’ and ‘America the Beautiful’.

Earlier in the day, the new President attended mass at the Cathedral of St. Mathew the Apostle with first lady, Jill Biden. He was joined by congressional leaders alongside Vice President, Kamala Harris and the second gentleman, Douglas Emhoff. This was their last public appearance before the short trip to the Capitol where they took their oath of office in front of a small crowd of onlookers.

It is indeed trench weather and the presidential entourage have taken it upon themselves to wear American designers––a stark contrast to the former administration who often wore more European designers while “putting America first.” The former President and First Lady left the White House earlier in the day wearing Chanel coats.

First lady, Jill Biden, set a monochromatic tone for inaugural style as she wore a blue tweed coat with velvet cuffs over a matching dress embellished with Swarovski crystals and pearls. Her outfit was designed Alexandra O’Neill of rising luxury brand Markarian. The President, as well as the second gentleman, Douglas Emhoff, wore suits by Ralph Lauren, an American staple luxury brand.

Vice President Kamala Harris in usual fashion identified very closely with her Black roots by not just her clothing but with her accessories too. Her coat was designed by Black designers, Christopher John Rogers, from Baton Rouge, Louisiana, and Sergio Hudson of South Carolina. Kamala’s purple suit is more in line with her minimal style and a stark contrast from the designer pair’s usual knack for colors and dramatic silhouettes.

The choice of purple appears to be a loaded one by the Vice President. Purple is symbolic of the women suffragette movement and also representative of a call for national unity considering that it is derived by mixing the republican red and democratic blue hues.

The Vice President also wore her signature pearls, an ode to Alpha Kappa Alpha, the oldest Black sorority in history. One which she was also a part of. The founders of the sorority are known as the Twenty Pearls, and Kamala’s inauguration style featured the pearls which she wore in solidarity with her sorority sisters.

In his first address to the nation as President, Joe Biden appealed to the far right for their support and to let him lead. He said,

Part of the limited guests in attendance were former President Barack Obama and Michelle Obama, former presidents Bill Clinton and George Bush, and former Vice President Mike Pence, among others.

More looks from the first and second families…

More moments from the 2021 inauguration…

The Athletic Side of Us: Chuks Collins Designs Eco-Friendly Athleisure Line