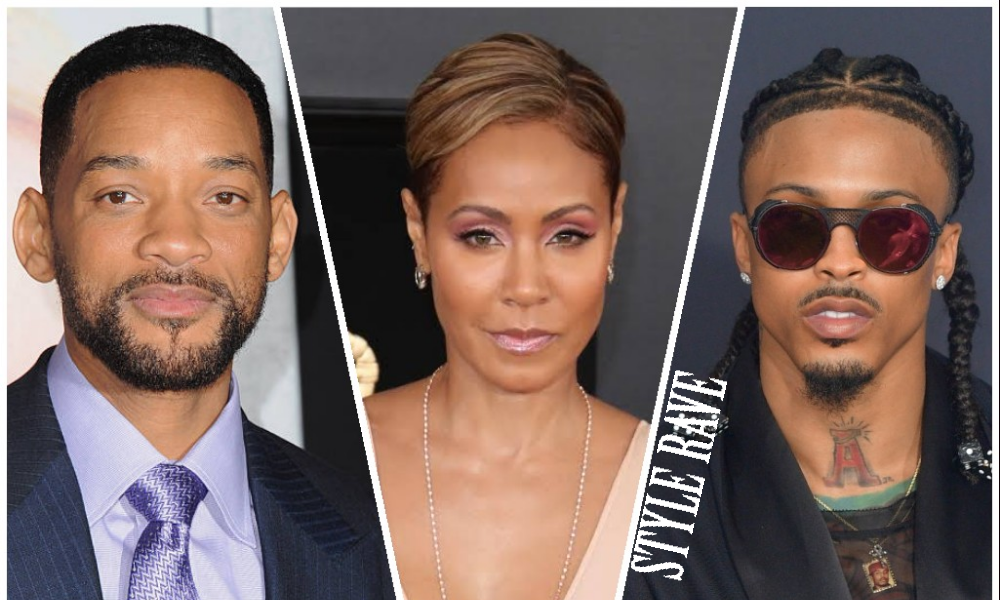 American RnB/Pop Singer, August Alsina just revealed to The Breakfast Club host, Angela Yee that he had been in a relationship with actress Jada Pinkett Smith and that her husband, Will Smith had also given his blessings on what we can now call an alleged love triangle. August Alsina Jada Pinkett.

The 27-year-old artiste had a lot to unpack during this interview. August, who hadn’t been doing interviews for a while now just released a new 27-track-album and this interview was as part of promotion for the album––so you judge as you please. He shared details regarding his health condition, which he announced in 2017, his music and very interestingly, his relationship with famous actress, Jada Pinkett Smith.

In 2018, Jada featured August Alsina on her Facebook TV hosted Show, The Red Table Talk where he opened up about addiction and how the Smith family got him through that period. During this interview, Jada also opened up about her sex addiction. The pair had met at a musical concert in 2015 and she revealed that August had come to them, the Smiths, as a young man seeking spiritual guidance. August alsina interview.

However, when August released his remix of Kelahni’s ‘Nunya’ in 2019, rumors of their relationship began to surface once again. These rumors had initially surfaced when in September of the previous year, during Jada’s birthday, August, in a since deleted Instagram post celebrated the star with words that many fans believed were inappropriate and too intimate for their family-friend type of relationship.

In the song Nunya, the lyrics, “You got me feeling like it was an act, you’re just an actress / Putting on a show ’cause you don’t want the world to know,” alongside the visuals of the said song, in which he was seen texting an older woman named Koren––got fans to quickly point out that Koren is Jada’s middle name. This didn’t help the already wild speculations. August denied these rumors then.

From denial to acknowledgment: Alsina tells “his” story

Now, promoting his new album, The Product III: stateofEMERGEncy, the Benediction crooner is changing his tune: “what I’m not okay with is my character being in question, I’m not a troublemaker. I don’t like drama.” August Alsina Jada Pinkett.

The singer also alluded to the fact that Will and Jada may have an open relationship saying, “I actually sat down with Will and had a conversation, due to the transformation from their marriage to life partnership that they’ve spoken on several times, and it… you know, not involving romanticism.” He then added “he gave me his blessing.” Implying that Will Smith was aware and okay with his and Jada’s relationship. Phew!

Talking about Jada, he said, “I totally gave myself to that relationship for years of my life, and I truly and really, really, deeply loved and have a ton of love for her.” For him, leaving the relationship was “the hardest thing I ever had to experience in this lifetime.” But he’s full of no regrets. He said, “I can die right now and be okay knowing that I fully gave myself to somebody… Some people never get that in this lifetime.” August alsina interview.

Another denial: Will and Jada deny Alsina’s allegations

This situation had a lot of tongues wagging all over social media and today, according to TMZ, a source close to the actress, Jada, has denied the allegations tagging it’s “absolutely not true.” The Daily Mail reported via a rep for Will Smith that he never gave the artist permission to be with his wife.

Who’s telling the truth? Why is the truth being told now? Well, for now, we can only watch as more details on this story unfolds.

Jada finally breaks her silence in a tweet about bringing herself on her own show. We all know that the red table show is all about “truth telling” and baring it all, so we are eagerly waiting for what truths Jada will be revealing.