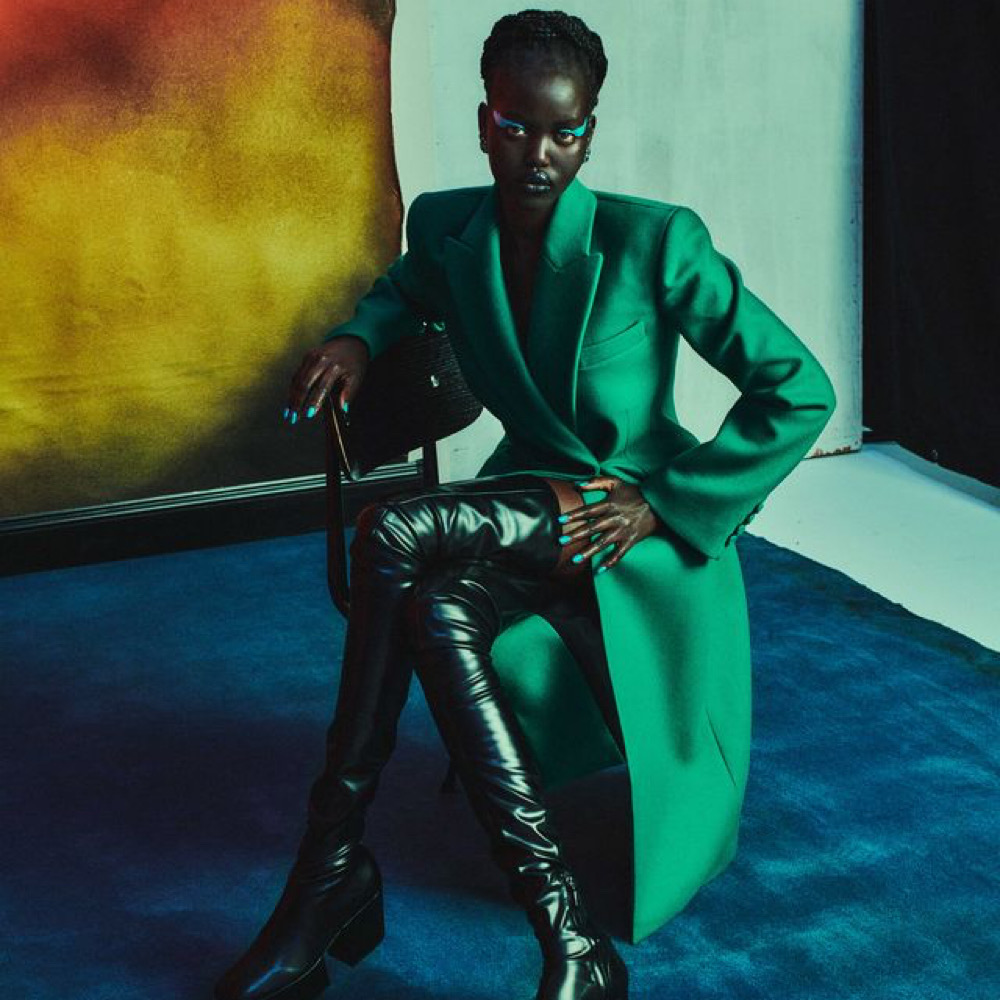 Supermodel Adut Akech is breathtaking as she poses in vibrant, modern, luxury wears for the August 2021 issue of ELLE US. As captured by photographer Chris Colls and styled by Alex White, the recent global brand ambassador for Estée Lauder gets candid on her life, career, and quick rise to fame.

In the interview titled; Adut Akech Is Electric, Elle Contributor Roxanne Fequiere refreshes memories about the 21-year-old’s journey from a refugee camp to the global high fashion streets. Born on Christmas day 1999, the South Sudan native came into a world of civil war and political unrest.

“I feel like this is my moment to show people—and to show the world—that yes, Black women are beautiful.”

She initially found home in refugee camp, Kakuma in Kenya, which coincidentally was home to another successful model, Somalia’s Halima Aden. After almost eight years in this camp, she, her mother and five siblings moved to Adelaide, Australia with the help of her aunt who lived there. Adut’s father died amid the fighting in South Sudan.

Akech made her international runway debut walking for Saint Laurent in 2016 and was named Model of the Year by the British Fashion Council just three years later. Ever since, her career has been on an upward route and she shows no signs of waning. At a time when models of color are more represented in fashion, Adut is a superstar.

#1. The vows she made to her mother when they first moved to Australia have all been fulfilled

In transit from the Australian airport to her new home, the then seven year old made a vow to her mother: “Now that we’re here, I’m going to get an education. I’m going to buy you a car and a house. I’m going to make something of myself.”

Akech revealed to Elle magazine that she has fulfilled those vows. “Yeah,” she says. “I made all those things happen.” And we are particularly proud of her.

#2. There is an agenda behind her recent career coup

Just last month, Akech Adut was named Estée Lauder’s global brand ambassador. She has come a long way from her first every runway show at 13, and uses the opportunity she has been given to show the world that Black women are beautiful. “I feel like this is my moment to show people—and to show the world—that yes, Black women are beautiful,” she says.

The charismatic beauty reveals that Black beauty is something she has always known regardless of the bullying and racism she faced as a tall, lanky and dark skinned girl when she moved to Australia. “It was the first time I was in a space with people who didn’t look like me, people who weren’t used to seeing people like myself,” she explains. “From a young age, I just told myself that I needed to grow a tougher skin to avoid all this outside noise, but also to accept that this is who I am. This is how God made me, and that’s not going to change anytime soon, or ever, to be honest.”

#3. Akech isn’t looking to rest on her laurels

Despite checking off more career goals in a handful of years than most do in a lifetime, Akech has no plans of slowing down. She cites the lessons she learnt from the events of last year: “Last year opened my eyes and made me realize, (1) Don’t take anything for granted, and (2) our time in this world is not promised. Anything can happen.”

She is currently engaged in several projects, however, she is yet to give details on them. But she has promised to tackle them as the world slowly reopens. “When things start to get better,” she says, “I’m going for it.”