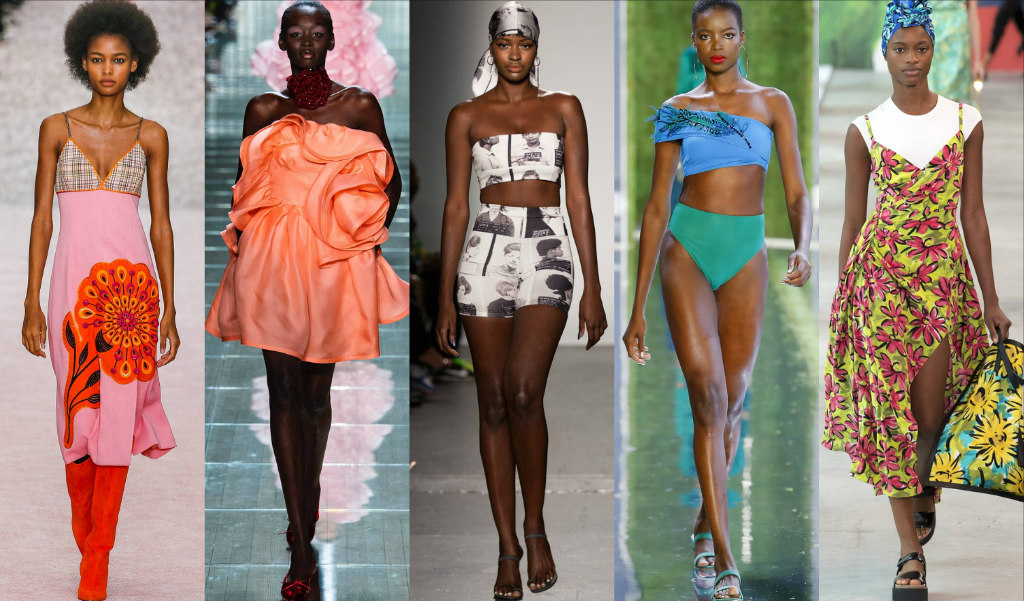 As New York Fashion Week SS19 came to an end, we couldn’t help but beam with pride over the good number of African models who walked the shows. From Nigeria’s own Mayowa Nicholas and Adesuwa Aighewi, to Angolan supermodel Maria Borges and even South Sudanese models like Adut Akech, Akiima Ajak and others, our rising continent was pretty well represented on the runways, although there’s definitely room for more inclusion.

This Angolan model was the first Victoria’s Secret model to walk the show with an afro. Since being discovered in 2010, Maria has gone on to walk for the likes of Balmain, Carolina Herrera, Diane von Fürstenberg, Dior, Elie Saab, Jean Paul Gaultier, Oscar de la Renta, Tom Ford, and Zac Posen among many others. She was named Forbes Africa Magazine’s top model of 2013. Mayowa was the female winner of the Elite Model Look Nigeria in 2014 and has since moved on to achieve greater heights in the world of modelling. She was the first Nigerian model to ever feature in a Dolce and Gabbana campaign and has since walked for international designers like Hermes, Balmain, Calvin Klein, Kenzo and more. Mayowa recently covered the July Issue of Vogue Germany and we can’t wait to see where this fast-rising supermodel goes from here. With insanely long legs, Ayobami was signed to Few Models Management after being scouted on Instagram. She made her worldwide debut on the Yves Saint Laurent runway in Paris and was later released to Givenchy. She has been listed as one of the 8 African models to watch out for in 2018 by SatisfashionUg.com. Sudanese-Australian model, Adut made history by becoming the second black model to close out the Chanel Couture Autumn 2018 show in Paris. This came after she made her European catwalk debut for Yves Saint Laurent for their SS17 collection. She has also walked for Alexander McQueen, Givenchy, Kenzo, Prada, Miu Miu, Tom Ford, Calvin Klein, Burberry, Giambattista Valli, Versace, and many others. Discovered during an online casting in 2017, the Angolan model has already made a mark in Paris — specifically on the Spring/Summer 2017 runways of Christian Dior, Valentino, Miu Miu and Kenzo. She also walked in Valentino’s Haute Couture show and posed for the fashion house’s latest ad campaign. This Nigerian-Chinese fashion model was discovered back in 2010, on her college campus in Maryland. She has since walked for top designers including – but not limited to – Alexander Wang, Louis Vuitton, Kenzo, Kate Spade, Miu Miu, Bottega Veneta, Marc Jacobs, Michael Kors, Prabal Gurung, Fendi, and Tommy Hilfiger. Her editorial portfolio includes covers of magazines like L’Officiel and Numéro, all of which has placed her firmly among fashion’s elites. Subah Koj was born in war-torn South Sudan and spent four years in Egypt before migrating to Australia. She became the first model of African descent to open an Australian Fashion Week show. Stunning South-Sudanese model Akiima made her runway debut for Adelaide’s local legend, Carla Zampatti, and has since walked for some of the biggest names in fashion — including Kenzo, Valentino, Iris Van Herpen, Prada and Alaïa. This Ghanaian-British model and activist have decided to change the face of modelling one freckle at a time, after learning to be comfortable in her own skin. She is one of the few models of African descent to walk the runway with her head shaved. Adwoa has also fronted campaigns for major brands, such as Chanel, Burberry, and Revlon. She is a recipient of several awards, including the British Fashion Council’s highly coveted Model of the Year. New York-based Guinean model Sira, decided at the age of 14 that she wanted to start modelling. In addition to being a model, she was named Hotel Palm Camayenne’s brand ambassador, which is the first five-star hotel in Conakry, Guinea. She was also the lead vixen in Wizkid’s ‘Come Closer’ video and has appeared in publications like GQ, WWD, Highsnobiety, C-Heads Magazine, Buzzfeed, Coveteur and Galore Magazine.