Gucci Mane and Keyshia Ka’oir expecting first child together, Donald Trump’s youngest brother passes on, David Silva’s statue to be erected in Etihad stadium. Stay in the know with our Rave News Digest which summarizes five of the hottest global news you need to catch up on, saving you time and energy. Consider it your daily news fix.

Congratulations are in order for Gucci Mane and Keyshia Ka’oir as the couple are expecting their first child. Keyshia shared the news on Instagram — with a jaw-dropping photo of her baby bump.

Keyshia Ka’oir announced that she’s expecting their first child in a big way, showing off her growing belly in sexy black lingerie. She also added a cheeky caption, “I ain’t athletic but on @laflare1017 D I did gymnastics.” Gucci also shared the news on his own Insta, with a different sexy photo of his pregnant wife, captioned, “My wife pregnant my life is great.”

This is the first child for Gucci Mane and Keyshia Ka’oir, who have been married since 2017, but both have children from previous relationships. 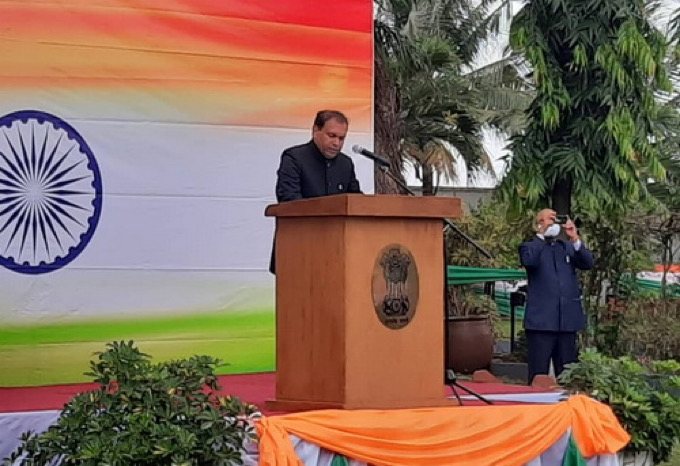 The Indian Government will make available three vaccines for the new coronavirus disease (COVID-19) that are currently under trial t Ghana and the rest of the world. The Indian High Commissioner to Ghana, Mr. Sugandh Rajaram who made this known to the media on Saturday said India’s relationship with Ghana which spans several decades, would be further strengthened when the vaccine is ready.

Mr. Rajaram was speaking to the media after he hosted a virtual anniversary of India’s independence from the British at his residence in Accra. The ceremony which was organized under strict COVID-19 protocols was attended by members of the Indian community in Ghana and the staff of the Indian High Commission.

#3. Cigarette ban lifted – but Dlamini-Zuma has a warning for all smokers

The cigarette ban has been officially vanquished after National Coronavirus Command Council leader Nkosazana Dlamini-Zuma confirmed that tobacco sales would be permitted at Level 2 – which kicks-in from Tuesday.

Dlamini-Zuma said people must avoid sharing cigarettes, as it could help to spread COVID-19 quicker.

A post shared by The Trump Family Friendly Page (@trumpfriendly2)

President Donald Trump has paid tribute to his best friend and youngest brother following his death at 71.

“It is with [a] heavy heart I share that my wonderful brother, Robert, peacefully passed away tonight,” he said in a statement on Saturday.

The president had visited his brother in the hospital in New York the day before his death, telling reporters: “He’s having a hard time.” It is unclear what caused Robert Trump’s death. A number of US media reports suggested he had been seriously ill.

Manchester City has announced plans for a statue of Spanish playmaker David Silva at Etihad Stadium. Silva’s successful 10-year spell at City came to an end after Saturday’s Champions League defeat by Lyon. Signed from Valencia in 2010, the midfielder, 34, made 436 appearances and helped City win 14 trophies.

The statue will be unveiled in 2021, along with another tribute dedicated to former City captain Vincent Kompany, who left the club last year and announced earlier on Monday he was retiring from playing.