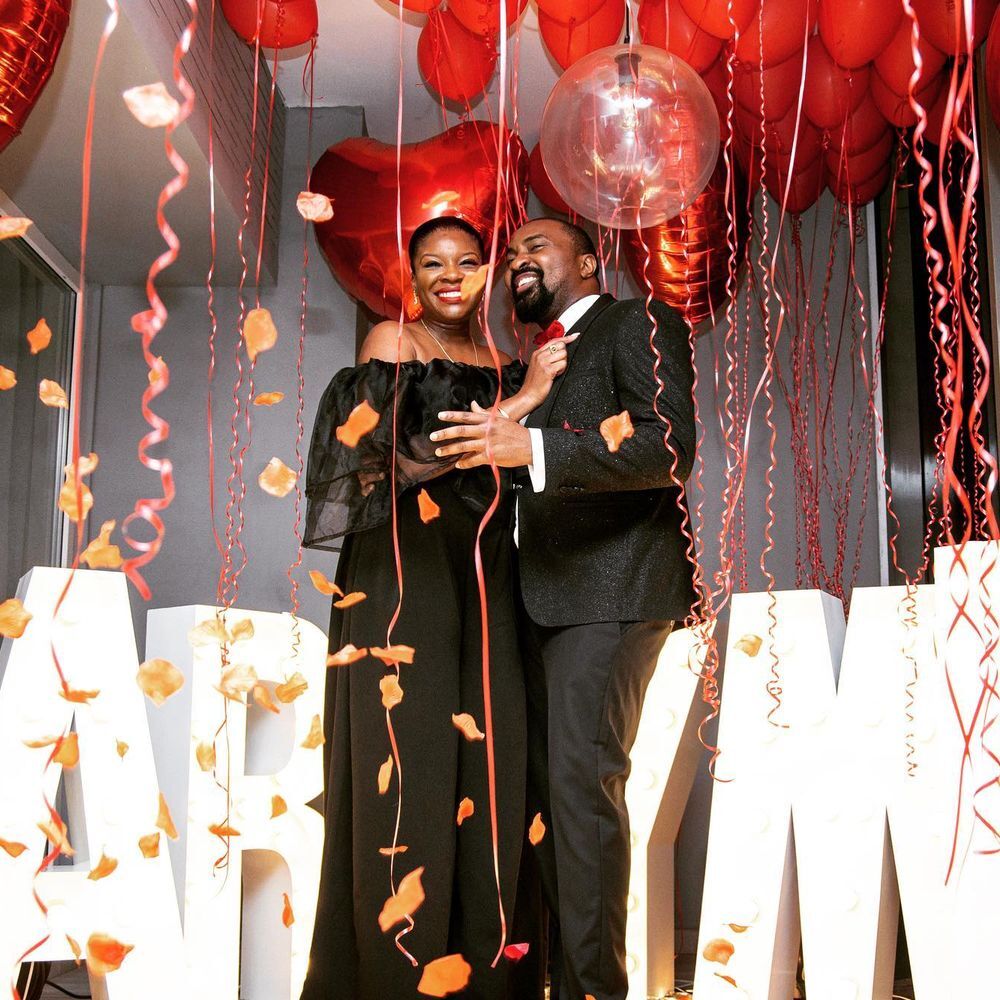 Kemi Adetiba is engaged, Adele sparks engagement rumors, Adidas drops Zouma. Stay in the know with our Rave News Digest which summarizes five of the hottest global news you need to catch up on, saving you time and energy. Consider it your daily news fix.

Nigerian movie director and producer, Kemi Adetiba, has announced her engagement to music executive, Oscar Heman-Ackah. The award-winning filmmaker took to her Instagram page on Wednesday, February 8, 2022, to share photos from her engagement with a lengthy caption: “We’ve taken some time to privately enjoy this moment and bask in the celebration of it all. However, we’re beginning to understand it might be next to impossible keeping a lid on this for much longer,” she wrote. “After thinking long and hard, we ultimately would love for this announcement to be on our own terms and molded in our own true narrative. Plus, you all here have followed my journey from the start and lovingly root for me – Now if that isn’t FAMILY, I don’t know what is 🙂

She didn’t forget to share with her fans the exact date her soon to be hubby, Oscar popped the big question. “So dear FAMILY, on the 28th of January in Ghana, delivered as a beautiful suprise and expression of love, and in the presence of some close friends and family, @oscarhemanackah asked that we spend the rest of our lives together, and I wholeheartedly said YES… without a single reservation,” she revealed.

According to his IG bio, Oscar Heman-Ackah, who’s of Ghanaian-Nigerian descent, describes himself as a creative entrepreneur, media solutionist, music exec and chief creative officer of Soltracka Productions.

Are Adele and Rich Paul engaged? That’s exactly what many fans want to know after the “Easy On Me” singer was spotted rocking an eye-catching diamond ring at the 2022 BRIT Awards. Returning to the BRIT awards after a 5-year hiatus, Adele dazzled at the ceremony which held Tuesday, February 8. While onlookers instantly fell in love with her custom velvet Armani Privé gown, others were left mesmerized by the massive pear-shaped diamond ring worn on her left ring finger.

The red carpet moment instantly went viral with many fans wanting to know the relationship status between the BRIT Awards 2022 Song of the Year winner and her sports agent boyfriend.

Are wedding bells ringing? Only time will tell. While it is unclear if the lovebirds are planning a wedding, a rep for the jeweler Lorraine Schwartz has reportedly confirmed to the media that Adele is wearing a ring from the designer’s luxury jewelry collection.

Unathi Nkayi will soon be back on the radio airwaves. Taking to Instagram on Tuesday, Unathi announced the radio bug had bitten again and she will start her new journey on March 1. “Guys it seems like this radio thing doesn’t want to let me go because on March 1, you know what I’m going to be doing? I’m going to be driving you home! 3-6 drive time. I’ll see you there,” she shared.

Unathi left her fans on a cliffhanger by not disclosing which radio station she will be joining, but they were happy to hear about her return. Unathi was fired from Kaya 959 late last year in the aftermath of an alleged argument between her and colleague Sizwe Dhlomo.

For weeks, Haitian investigators believed that Prime Minister Ariel Henry himself was involved in both the planning of the assassination and a subsequent cover-up. https://t.co/oVmjwXBaXd

The assassination of Haiti’s former president, Jovenel Moïse involved the nation’s current Prime Minister, Ariel Henry, investigators and a judge are alleging. According to reports, Haitian authorities said former Haitian anti-corruption official Joseph Felix Badio was in charge of the group of more than two dozen men who carried out the shooting. Moïse was assassinated last July when gunmen invaded his home in the middle of the night and shot him a dozen times. His wife, Martine Moïse, was also shot in the attack but survived.

Reports also say that Badio, who was then on the run, was set to meet with Henry in September. By that time, the pair had already met twice in person since Moïse’s death. Investigators had suspected for weeks that Henry was involved in the assassination so they hoped that an upcoming meeting would help connect the prime minister to the crime. Word of that meeting, however, and planned raid leaked so it ultimately did not take place.

Unidentified law enforcement sources told the network that Henry was allegedly involved in both planning and covering up the assassination. Additionally, Judge Garry Orélien, who was overseeing the case until recently, made similar accusations in fall 2021.

BREAKING: Adidas have confirmed Kurt Zouma is no longer a contracted athlete after a disturbing video emerged of him hitting, dropping, and kicking his pet across his kitchen floor on Monday.

West Ham defender Kurt Zouma has been dropped by sponsor Adidas after a video emerged on Tuesday of the Frenchman kicking and hitting his cat. Zouma came under fire for the video after it emerged on social media, with the RSPCA having now confirmed that the cats have been removed from his residence. Despite starting Tuesday’s win over Watford, Zouma has been fined by West Ham and it was confirmed that Essex Police are investigating, with more than 150,000 people having signed a petition calling for Zouma to be prosecuted.

In addition to the fine from West Ham, Zouma has been dropped by apparel sponsor Adidas, who announced on Wednesday that the company is no longer working with the defender. “We have concluded our investigation,” the company said in a statement, “and can confirm Kurt Zouma is no longer an Adidas contracted athlete.” Kemi Adetiba Engaged

Shortly after the video emerged, Zouma issued a statement apologizing for what had happened, stating: “I want to apologize for my actions. There are no excuses for my behavior, which I sincerely regret. I also want to say how deeply sorry I am to anyone who was upset by the video. I would like to assure everyone that our two cats are perfectly fine and healthy. They are loved and cherished by our entire family, and this behavior was an isolated incident that will not happen again.”