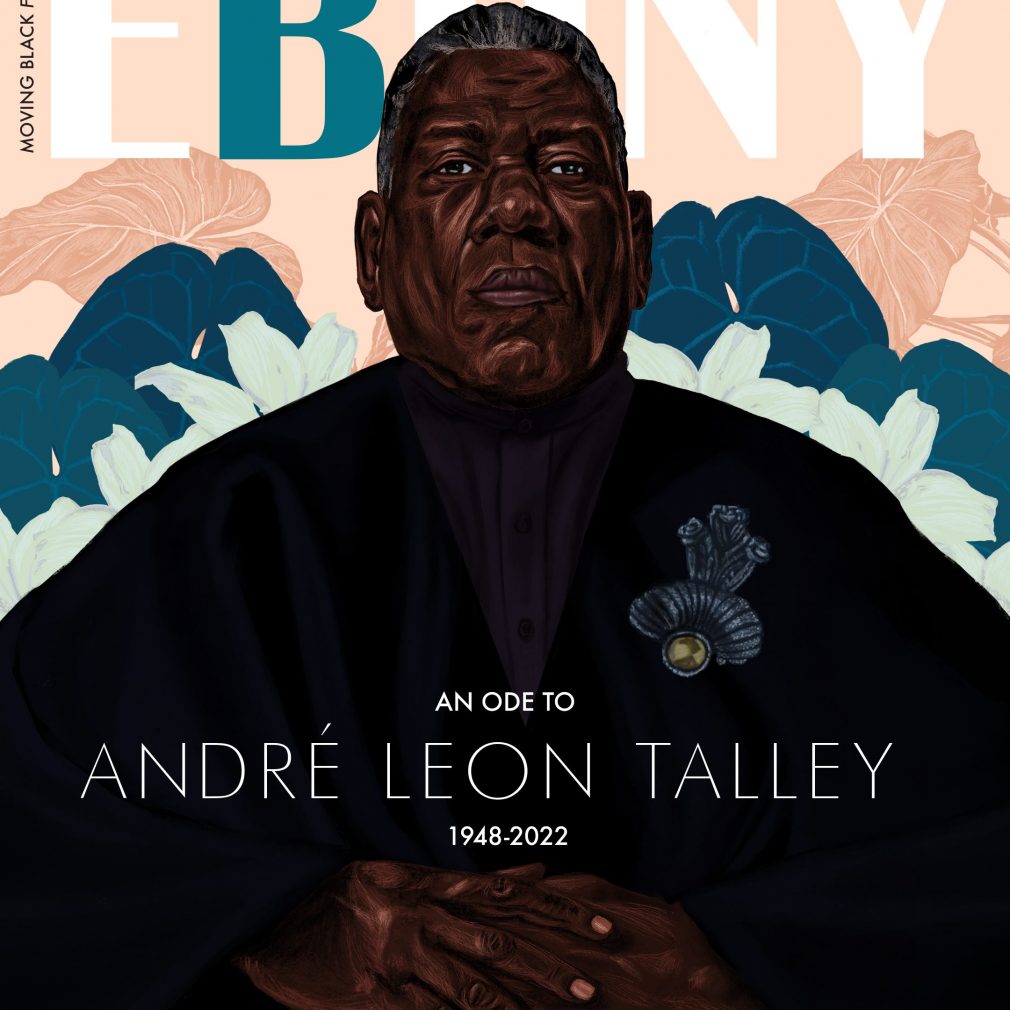 “Through this cover experience, EBONY honors one of its most special alumni who went on to leave a lasting global cultural impact and influence that remains unmatched––not only in the fashion world but also to our culture…”

In a moving homage, Simmons details her friendship with the larger-than-life creative force that was André Leon Talley which began at the start of her modeling career. She shares some of her fondest memories of Mr. Talley – from him exposing her to art and architecture to dressing her for the MET Gala to their constant “kiki” sessions. Throughout the story, the Baby Phat CEO describes how strong their bond was as it was “forged by the struggle of being the ‘only one’ and breaking through as fashion’s unlikeliest darlings.”

Prior to his storied career at Vogue, Mr. Talley also served as a fashion editor at EBONY in the early 1980s. In his last book, The Chiffon Trenches: A Memoir, he recalled his time at EBONY as a “safe haven” that openly welcomed him and made him feel like family.

“Through this cover experience, EBONY honors one of its most special alumni who went on to leave a lasting global cultural impact and influence that remains unmatched––not only in the fashion world but also to our culture. We can never truly encapsulate all that André was and all that he meant but––with the help of Kimora Lee Simmons––we wanted to give a proper sendoff to this iconic figure in a way that showcases the dynamic person that he was and for it to come from someone who knew and loved him,” said Marielle Bobo, Editor-in-Chief and Senior Vice President of Programming, EBONY.

“He was a culture maker, a culture shifter and a ceiling breaker. I, along with countless other Black journalists, stand directly on his shoulders as a lasting testament to his legacy. As we celebrate Black History Month and prepare for Fashion Week this February, we had to take this opportunity to honor this man who was Black excellence and achievement personified – a true one-of-one.”

“As EBONY celebrates its one year anniversary since our relaunch in 2021, I am so proud of the work we are doing to cover important stories like this and the people like André Leon Talley who have helped to shape and define facets of our culture,” concluded Michele Ghee, CEO, EBONY & JET. “In that same spirit, we will continue to move Black forward!”

In addition to its cover story, EBONY is celebrating Black History Month with a series of related packages and stories including:

EBONY also announced at the beginning of the month that it would, in partnership with OLAY, release a limited-edition EBONY commemorative print issue featuring the winners of its longest running editorial franchise––the reimagined HBCU Queens––as the cover stars. The EBONY x OLAY commemorative print issue is slated for release on February 11 marking International Day of Women and Girls in Science and will be available at all Barnes & Noble, select Target, HBCU stores, and retail chains nationwide.

“There were a few [Black people in fashion], like Patrick Kelly, but André is one of the very few. And coming from the Deep South and just living in that time, and being able to stand on his own two feet and ascend to all the greatness he did… I realized that he’s kind of like a godfather [to me]. We’re like family.”

“My ‘godfather’ was friends with Andy Warhol and [Jean-Michel] Basquiat, so when I’m telling you the very essence of culture, that is him no matter how you slice that pie. It doesn’t matter what kind of culture. He’s always going to be there, from hip-hop to classical; art to architecture.”

“We’re always holding each other, kissing, whispering, giggling, covering the mouth, giving a side-eye. Oh, my God! We had code names for everybody in the industry. Life with André was like a kiki—a kiki of the classics.”

“He lived at the intersection of music, fashion and media–including hip-hop culture. All of your favorite hip hop glitterati sought him out as a conduit between urban culture and stylists, editors, and designers. That was one of his great gifts—cross-pollination.”

“André has inspired [Puffy, Pharrell, Will.i.am, Jay-Z, Mary J. Blige, and Kanye West]. He used to call Puffy ‘Errol Flynn,’ which to me is evidence of his ability to reference eras and moments and translate them into current moods and trends.”

“Fashion owes him a lot. He was one of the only Black people at Vogue forever. One of the only. To me, he is like Anna Wintour. To me, he is alongside Karl Lagerfeld or Yves Saint Laurent. He’s not necessarily a designer, but he’s a creative.”

This is a Style Rave original content exclusively created for our readers. If reproduced, distributed, transmitted, cached, or otherwise used by any other publishing house or blogs, such use should provide a direct link to this source article. Use of and/or registration on any portion of this site constitutes acceptance of our Terms & Conditions and Privacy

The Best Celebrity Looks At The 2018 E! People’s Choice Awards