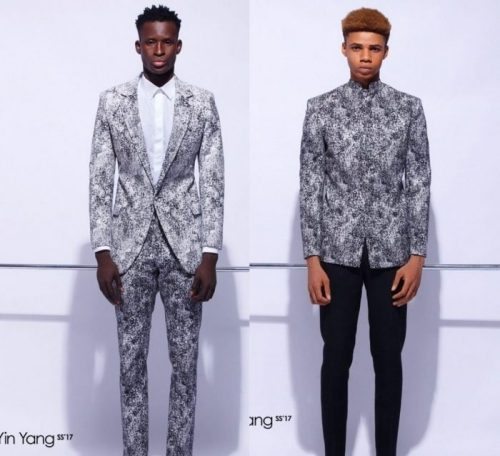 Rising menswear brand, Josh Amor which prides itself in creating modern, minimalist designs for the upwardly mobile gentleman has just released a fresh, new collection.  The dynamic collection is inspired by the Chinese philosophy, ‘Yin Yang – dark and bright’ which illustrates how opposite forces are in actual sense complementary, inter-connected and interdependent in nature. Many tangible dualities such as fire and water and expansion and contraction are also perceived as physical manifestations of the duality symbolized by the Yin Yang philosophy. On this note, it is safe to say nearly everything has a Yin Yang perspective. For instance, shadows cannot exist without a reflection of light.

In line with the Yin Yang theory of life, this has been interpreted as a monochromatic collection that shows the distinctiveness and interdependency of black and white as an indivisible whole instead of two distinct features. The brand’s creative designer Ayobamidele Majekodunmi in his own words describes the ‘YinYang’ collection as:

“A disambiguation that revolves around black and white colours to show how distant yet related both are, reflecting on the brand’s aesthetics. It is a dualistic monism and can be seen as complementary rather than opposing hues that interact to form dynamic pieces in which the whole is greater than the assembled parts.”

More important is the message of peace and unity which this collection preaches. The fact that the black and white race would be better off coming together as one people; in essence, how beautiful the world would be without racial segregation, discrimination, fights and crisis.

Last Week, Good-Looking Menswear Was The Order Of The Day