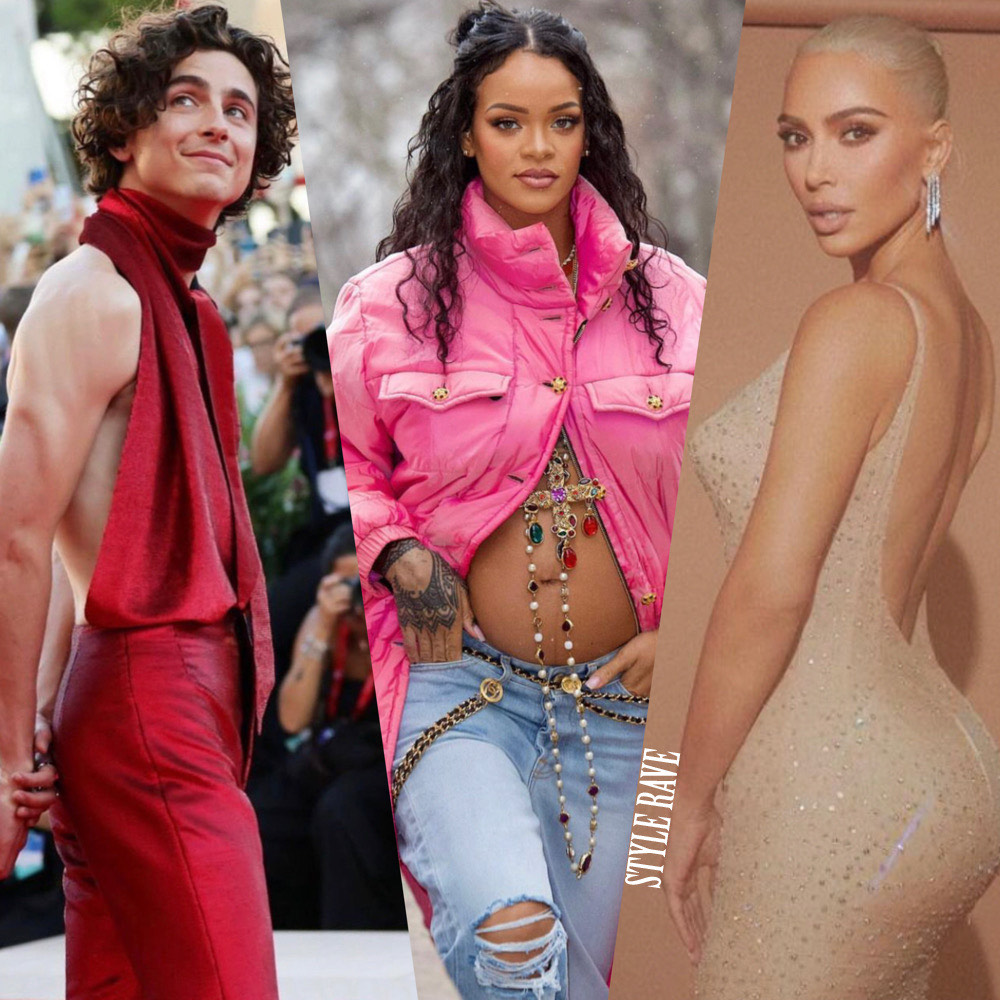 2022 was a significant year as the fashion industry recovered from the devastation of the previous two years. We experienced world-shattering red carpet moments and eagerly awaited runway debuts. The Supers returned, and Rihanna took part in one of the most famous pregnancy announcements in history. Fashion Moments of 2022

While the world fell in love with micro-mini skirts once more and Valentino made an intriguing shift towards monochromatic, the year came to a conclusion with some significant departures. Below, we look back on a year of the most viral, unhinged, excellent, and talked-about fashion moments of 2022.

Here are the 10 biggest moments in fashion this year…

When Kim Kardashian appeared on the red carpet for the 2022 Met Gala wearing Marilyn Monroe’s “Happy Birthday, Mr. President” outfit, it was perhaps one of the most controversial moments in red carpet history. The see-through number, which was based on a concept by Bob Mackie for Jean-Louis, rose to fame when Monroe donned it to sing Happy Birthday to President John F. Kennedy in 1962 on his 45th birthday.

Due to the renowned garment’s delicate nature, Kardashian received criticism for wearing it and jeopardizing its integrity. Others also criticized her drastic weight loss in order to fit into the dress. All told, it was a discussion that dominated the internet for weeks, both before and after the specific incident.

The phrase “nepotism baby” has been bandied about a lot this week, but if Bella Hadid has shown us anything, it’s that she’s way more than that. After a season in which she appeared in a mind-boggling number of runway shows, the supermodel ended the year with one of fashion’s most viral moments: Coperni’s SS23 show, where she walked down the runway in nothing but a nude thong before being covered in a material-like substance until it transformed into a body-hugging dress.

According to reports, $26.3 million worth of publicity was given to the demonstration. Model of the Year was eventually awarded to Hadid at the Fashion Awards earlier this month.

Blake Lively mirrored the transformation of New York’s Statue of Liberty from bronze to oxidized green at the Met Gala 2022. She first featured a Versace tulle column dress embroidered with crystal, metallic leather, and a tri-tone copper foil Duchesse with an oversized bow. The piece was then transformed into a sea blue and copper gown with a stone-studded corset and stylish gloves. The train featured a hand-painted and embroidered celestial map inspired by the 12 zodiac constellations decorating the ceiling of Grand Central Station. She finished the outfit with a multi-hued, stone-studded tiara and earrings.

The only person who could make us dedicated to a pregnancy announcement is Rihanna, of course. Our queen made the internet go viral at the start of the year when she announced that she was expecting the world’s coolest baby with A$AP Rocky while donning a vintage Chanel coat and Christian Lacroix accessories. We still clearly recall it. What a joyous moment.

#5. Linda Evangelista returns to the runway for the first time in 15 years

After a 15-year absence, supermodel Linda Evangelista triumphantly returned to the runway in September 2022 for the Fendi show in New York. Evangelista, one of the first “Supers,” made headlines in recent years after disclosing that a cosmetic treatment had left her, in her own words, “brutally deformed.” Evangelista’s editorial and catwalk presence marked the golden era of the supermodel in the 1990s.

After her walk for Fendi back in September, Kim Kardashian and Kate Moss, among others, gave Evangelista a standing ovation. She also made an appearance on the cover of British Vogue’s September issue, marking a return to not only the runway but also to editorial.  Fashion Moments of 2022

Alessandro Michele abruptly announced his departure from Gucci at the beginning of December after seven years as the creative director of the Italian fashion house, breaking news that few people had anticipated. It is unclear what Michele will do next after his massive, maximalist renovation of the House, but we will undoubtedly learn more in due course. Gucci’s internal design team will keep putting out collections until a replacement is named, and we’ll keep making assumptions.

#8. The return of the micro-mini skirt

A deconstructed—and incredibly tiny—take on the pleated schoolgirl staple, Miu Miu’s Y2K-esque miniskirt was the one look that dominated both the red carpet and magazines this year. In 2022, the skirt was worn everywhere — on the streets during fashion month and in high-fashion spreads like Nicole Kidman’s Vanity Fair cover photo.

The skirt is more than just a skirt, as is true of most significant fashion moments. The low-slung, micro-mini look appeared to be the beginning of a bigger aesthetic resurgence from the early 2000s, when “heroin chic” and “ultra-skinny” were considered to be wearable trends.

Valentino had a remarkable year. From the launch of Pierpaolo Piccioli’s Valentino Pink PP collection, which saw an almost totally hot pink catwalk debut for the brand’s FW22 collection, to its historically significant couture collections, an iconic association with Zendaya, and other developments. It was a crucial moment for Piccioli’s tenure at the company, which is widely known for Valentino Garavani’s “Valentino Red,” and it confirmed that “Barbiecore” was unquestionably happening.

Timothée Chalamet exposed the small of his back to the fervent fan club that is the majority of the globe for the “Bones and All” premiere at the Venice Film Festival, and he knew precisely what he was doing. Chalamet continued his successful working relationship with Haider Ackermann by donning a red suit combo with a top that resembled a halter top and completed the look with a neck scarf. People were on their knees as a result! Fashion Moments of 2022