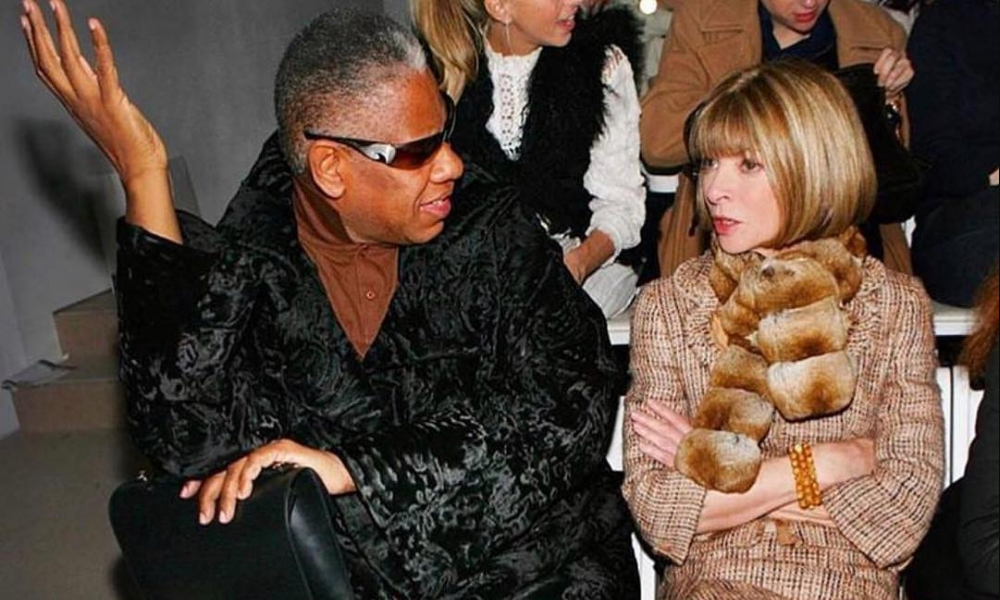 André Leon Talley’s new book, The Chiffon Trenches: A Memoir, won’t be out until September according to the publishers at Penguin Random House, but the excerpt which focuses on his former Vogue boss, Anna Wintour, has got the fashion industry talking already. André Leon Talley 2020

However, Anna Wintour was not the sole focus of André Leon Talley’s book as he also spilled the tea on the late Karl Lagerfeld and the war of words between Tom Ford and Yves Saint Laurent.

He also speaks about Andy Warhol, author Fran Lebowitz and Catherine Guinness of the beer family, who once came in to talk about a piece she was working on about the underworld of S&M with her gay friends.

His memoir is filled with revealing anecdotes of decades of celebrities. He talks about picking up Bianca Jagger at the Pierre Hotel while Mick Jagger was asleep in bed – they tiptoed past him. On another occasion at a lunch for Kay Graham, André Leon Talley recalled sitting next to Diana, Princess of Wales. She kept asking him: “Lettuce and Diet Coke?” and only after a few minutes did he realize she was asking if that was all that models ate. Later during the lunch, André knocked Diana’s red wine glass into her lap. The room gasped – she was wearing a lavender Versace suit – but she brushed it aside and said: “It’s nothing.”

André and Anna have been friends for such a long time that they were once regarded as a match made in fashion heaven. She was the formidable British editor-in-chief of Vogue and he was the flamboyantly dressed gay black fashion commentator, journalist and stylist who acted as her confidant and was never far from her side. However, nothing lasts forever!

‘… she adopts a sphinx-like silence and decimated him with this silent treatment so many times as this is just the way she resolves any issue.’

From having his podcasts cancelled without explanation to being replaced by a young YouTuber as Vogue’s red carpet interviewer for the Met Gala, little wonder as to why André would feel slighted. According to him, Anna adopts a “sphinx-like silence and decimated him with this silent treatment so many times as this is just the way she resolves any issue.” He went on to further add “I had suddenly become too old, too overweight, too uncool, I imagine, for Anna Wintour.”

André and Karl met in 1975 when he interviewed him for Interview magazine. They bonded over their shared love of 18th century French high fashion and afterwards, they had high tea together. Karl then surprised André by inviting him into the bedroom, opened his suitcases and handed him some silk crepe de chine shirts in kelly green and pink peony, each with a matching scarf. Karl said: “Take this. It will look good on you. Take that. I am tired of these shirts! You should have them.”

André says there was “a way I could talk to Karl that no one else could.” Karl grew to trust André so much that he would sometimes even make changes to his collection based on his suggestions.

When Tom Ford became creative director of YSL, he drew jealousy and scorn from Yves Saint Laurent himself. Tom told André he still has some ‘terrible’ handwritten letters from the legendary French designer. After one show, Saint Laurent supposedly said to Tom Ford: “In 13 minutes you have managed to destroy 40 years of my work.” Tom said they were the “meanest and most vicious letters he has ever received.” André Leon Talley 2020

According to WWD, André says,

“…This is not a vengeful book about Vogue and Anna Wintour. There are parts in the book where I say that some of the best years of my life were at Vogue. And the career beginning in 1983, basically I owe it to Anna Wintour.”

A source close to Anna Wintour told WWD that she had asked for certain references to be removed from the book because they involved members of her family, who didn’t choose to have aspects of their lives made public. They added that she considered André a friend for more than three decades and was saddened by the way he chose to portray many aspects of their friendship, but he is entitled to tell it as he remembers it and she wishes him the best.