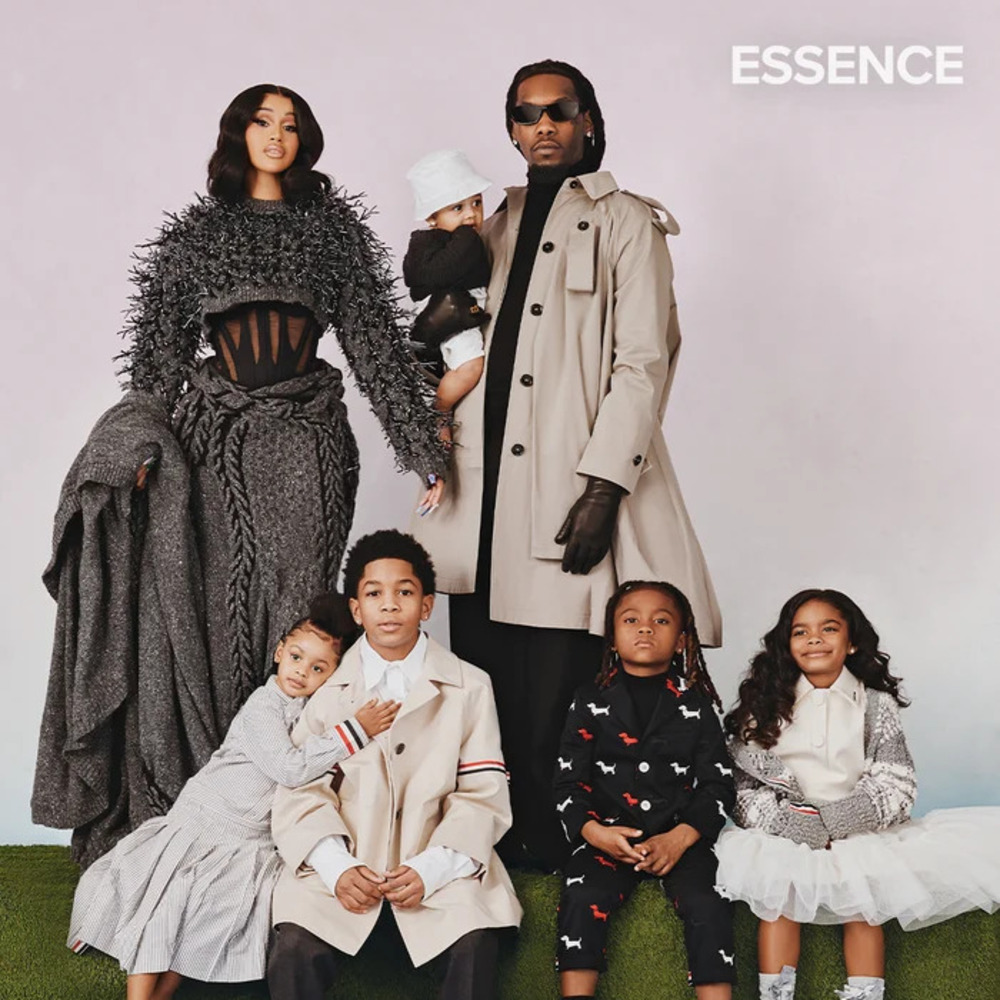 The last child, whom we first got a small glimpse of when he was first born last September, had not been posted on social media by either parent. According to Cardi and Offset, that decision was intentional thanks to their previous experience with social media and their daughter Kulture.

Photographed by Ahmad Barber and Donte Maurice for AM+DB Studio and styled by Kollin Carter and Shaleeta Pendleton, the issue highlights the profound endurance of love.

#1. The couple revealed the name of their son

Fresh from sharing the first snaps of their newborn son, the pair revealed the youngster’s name in the magazine. Per Essence, the newest addition to the clan is named: Wave Set Cephus. The 7-month-old appears on the cover of his first magazine alongside sister Kulture (who is about to turn 4) and older siblings from Offset’s previous relationships.

#2. The couple revealed how they met

Cardi, 29, and Offset, 30, first met in January 2017. According to Essence writer Brande Victorian, “After sliding into the DMs of one of Cardi’s friends to let her know he was interested in the budding rapper, Offset invited Cardi to a “Bad and Boujee” ­dinner he was hosting, to celebrate his rap group’s Billboard Hot 100 chart-topping single of the same name.”

“When my friend told me that he was trying to holler at me, I was like, ‘I’m not trying to deal with no industry rappers, because I already know what type of time they’re on,” Cardi admits to Victorian. “I was scared. I’m a relationship girl.”

But Offset convinced her to go out with him — to Super Bowl LI, no less. (The Atlanta Falcons were playing the Patriots; Offset is from Atlanta.) “I was thinking, ‘Let me go big, man,’” he recalls to Essence. “It was a vibe.” The two hit it off, and the vibes continued throughout the spring and summer.”

#3. Cardi B and Offset revealed how their marriage came to be

On September 20, 2017, Offset and Cardi made the relationship official when they got married — after all of seven months. The nuptials took place in the bedroom of his Atlanta home — on what was something of a dare. “We were making out and he was like, ‘You’re going to have my baby one day,’ and I was like, ‘We ain’t having no baby. You have to marry me,’ and he was like, ‘Alright, let’s get married,’” Cardi recalls.

The moment of passion took a left turn when the couple got into an argument—one that Cardi thought would mean the end of their relationship. So she decided to test Offset’s sincerity. “I was like, ‘Let’s just get married then. You said you wanted to marry me.’ And we did.”

#4. Cardi B did not meet Offset’s kids from his previous relationships until after they got married

“After we got married, that’s when I first met his kids,” Cardi tells Essence. Offset already had three children: his son Jordan, who is now 12, and two seven-year-olds — son Kody and daughter Kalea. (They are not twins.) The children warmed to Cardi, which was gratifying. “I always wanted them to love me,” she says, “and they really do. They tell me that. I feel it, and I hope that we always have a great relationship.”

#5. They seem to have hacked marriage as they explained what works for them and how they’ve found a balance

The two focus on family, but give each other permission to pursue professional goals. “It might sound weird, but we don’t always put love first—because sometimes you can put love before work and mess up your career, because you’re not focused,” Offset says. “Love is important, but if you’ve got that foundation, we should respect each other and what we have going on. I had never experienced a woman that was working like me and doing what I’m doing. It turns me on. She does her own thing. She likes the hustle, so that ain’t never getting in between our love.”

At the same time, Offset wants to make sure Cardi isn’t being hustled. That’s why he’s asked to review business contracts that Cardi signs. “From the beginning, I remember he used to ask to see my contracts, and I would be like, ‘Boy, I don’t know you like that,’” Cardi says. “But when I started letting him in on more things, I started seeing things differently. People have cut me short a lot, and ever since I have involved him in my business, I’ve been doing so much better.”

How To Win The Jumpsuit Style-Game: 31 Looks + Styling Tips!