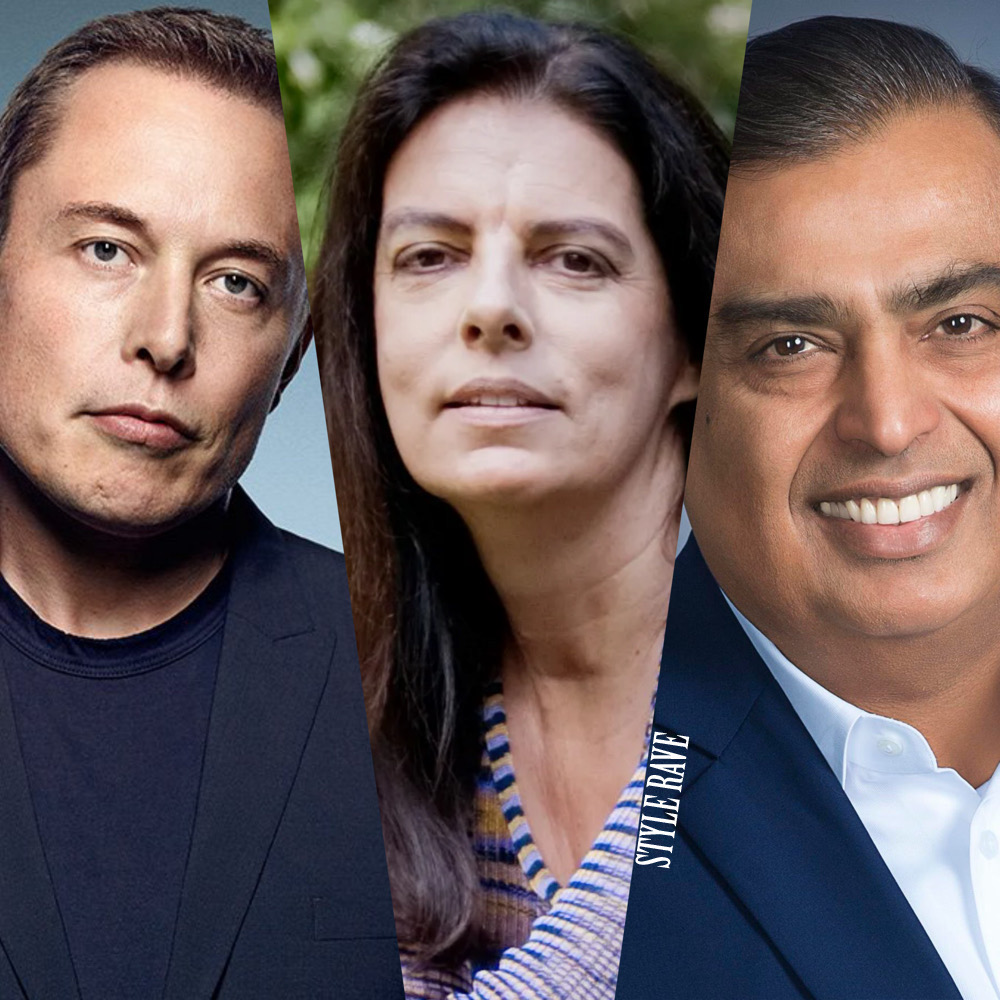 esterday, Forbes magazine announced its annual list of world billionaires and there were indeed a lot of new additions. One of which is singer, businesswoman, and mom-to-be, Rihanna. The star made her debut at number 1,729 with an estimated net worth of US$1.7 billion, this is majorly due to her beauty empire, Fenty Beauty. Having said that, who are the richest people in the world in 2022 according to Forbes? Let’s find out. Richest people in the world 2022

For the 36th annual list of the richest people in the world, Forbes reveals that there are 2,668 — 87 fewer from 2021. These ultra-rich boast a combined net worth of $12.7 trillion—$400 billion less than in 2021. This comes as no surprise as the effects of war, plummeting markets, and the pandemic have indeed taken their toll. Russia and China have seen more billionaires fall off the list as a result of tight sanctions against Russia and government policies in the case of China. In spite of these losses, the richest people in the world in 2022 added 236 newcomers from last year and 1,000 billionaires are richer today than they were last year.

Profile: Elon Musk is working to revolutionize transportation both on Earth, through electric car maker Tesla — and in space, via rocket producer SpaceX. He owns 21% of Tesla and in April 2022, a regulatory filing revealed that Musk had purchased 9.2% of Twitter. The company invited him to join its board the next day. SpaceX, Musk’s rocket company, is valued at $74 billion after a funding round in February 2021. Interestingly, Musk grew up in South Africa, then immigrated to Canada at age 17. He landed in the U.S. as a transfer student to the University of Pennsylvania.

Profile: Jeff Bezos founded e-commerce giant Amazon in 1994 out of his garage in Seattle. He stepped down as CEO to become executive chairman in July 2021. Bezos sold $8.8 billion worth of his Amazon stock in 2021 and also gave some shares away; he now owns a bit less than 10% of the company. He also owns The Washington Post and Blue Origin, an aerospace company developing rockets; he briefly flew to space in one in July 2021.

Profile: Bernard Arnault oversees the LVMH empire of some 70 fashion and cosmetics brands, including Louis Vuitton and Sephora. In January 2021, LVMH acquired American jeweler Tiffany & Co for $15.8 billion, believed to be the biggest luxury brand acquisition ever. LVMH spent $3.2 billion in 2019 on luxury hospitality group Belmond, which owns or manages 46 hotels, trains, and river cruises. Currently, four of Arnault’s five children work in corners of the LVMH empire: Frédéric, Delphine, Antoine, and Alexandre. Richest people in the world 2022

Profile: Bill Gates turned his fortune from software firm Microsoft into a diversified fortune including investments in zero-carbon energy. In May 2021, he and his then-wife Melinda announced on Twitter they were ending their marriage after 27 years. They still co-chair the charitable Gates Foundation. Gates, who co-founded Microsoft with Paul Allen (d. 2018) in 1975, has transferred at least $5.7 billion worth of shares in public companies to Melinda.
As of March 2020, when Gates stepped down from the Microsoft board, he owned about 1% of the software and computing company’s shares.

Profile: Known as the “Oracle of Omaha,” Warren Buffett is one of the most successful investors of all time. Buffett runs Berkshire Hathaway, which owns more than 60 companies, including insurer Geico, battery maker Duracell and restaurant chain Dairy Queen. He bought his first stock at age 11 and first filed taxes at age 13. The investor has promised to donate over 99% of his wealth. So far he has given more than $45 billion, mostly to the Gates Foundation and his kids’ foundations.

Profile: Larry Page co-founded Google in 1998 with fellow Stanford Ph.D. student Sergey Brin.
With Brin, Page invented Google’s PageRank algorithm, which powers the search engine.
Page was CEO until 2001, when Eric Schmidt took over, and then from 2011 until 2015 when he became CEO of Google’s new parent company Alphabet. In December 2019, he stepped down as CEO of Alphabet, the parent of Google, but remains a board member and a controlling shareholder.

Profile: Sergey Brin co-founded Google with Larry Page in 1998 after the two met at Stanford University while studying for advanced degrees in computer science. Google went public in 2004 and began trading as Alphabet, a newly created parent company, in 2015. Brin was absent from public Alphabet events for much of 2019; he spent his time on Alphabet’s moonshot research lab X. He is reportedly funding a high-tech airship project.

Profile: Larry Ellison is chairman, chief technology officer, and co-founder of software giant Oracle, of which he owns about 35%. He gave up the Oracle CEO role in 2014 after 37 years at the helm. Oracle has grown in part through steady acquisitions of software companies, the biggest of which was $9.3 billion for NetSuite in 2016. In 2020, Ellison moved permanently to the Hawaiian island Lanai, which he bought nearly all of in 2012 for $300 million. Ellison joined Tesla’s board in December 2018, after purchasing 3 million Tesla shares earlier that year.

Profile: Steve Ballmer is the high-wattage former CEO of Microsoft, who led the company from 2000 to 2014. He joined Microsoft in 1980 as employee No. 30 after dropping out of Stanford’s MBA program. Ballmer oversaw Microsoft after the first dot-com crash and through efforts to catch up to Google in search capabilities and Apple in mobile phones. The same year he retired from Microsoft, he bought the NBA’s Los Angeles Clippers for $2 billion. In 2018, he invested $59 million in Social Solutions, which makes software for nonprofits and government agencies. Richest people in the world 2022

Profile: Mukesh Ambani chairs and runs $74 billion (revenue) Reliance Industries, which has interests in petrochemicals, oil and gas, telecom, and retail. Reliance was founded by his late father Dhirubhai Ambani, a yarn trader, in 1966 as a small textile manufacturer. After his father’s death in 2002, Ambani and his younger sibling Anil divvied up the family empire. Ambani is pivoting Reliance into green energy. The company will be investing $80 billion over the next 10-15 years in renewable energy and building a new complex next to its refinery.

Profile: Infrastructure tycoon Gautam Adani controls Mundra Port, India’s largest, in his home state of Gujarat. His $13 billion (revenue) Adani Group’s interests span infrastructure, commodities, power generation and transmission, as well as real estate. Adani also owns Abbot Point, a controversial coal mining project in Australia, whose Carmichael coal mine is billed as one of the world’s largest. It took nine years for Adani to get all approvals. Adani acquired a 74% stake in Mumbai International Airport, India’s second-busiest, in September 2020. He’s now the country’s biggest airport operator. The businessman wants to be the world’s largest producer of green energy and has said he will invest up to $70 billion in renewable energy projects.

Profile: Michael Bloomberg cofounded financial information and media company Bloomberg LP in 1981. He put in the seed funding for the company and now owns 88% of the business, which has revenues north of $10 billion. Bloomberg got his start on Wall Street in 1966 with an entry-level job at the investment bank Salomon Brothers. He was fired 15 years later. He has been the mayor of New York City for 12 years and is one of just four individuals to have served that long.

Profile: Mexico’s richest man, Carlos Slim Helu and his family control América Móvil, Latin America’s biggest mobile telecom firm. With foreign telecom partners, Slim bought a stake in Telmex, Mexico’s only phone company, in 1990. Telmex is now part of América Móvil. He also owns stakes in Mexican construction, consumer goods, mining, and real estate companies as well as 17% of The New York Times. Slim and his family hold a 79% stake in Grupo Carso, one of Latin America’s largest conglomerates, accounting for over 8% of his fortune.

Profile: Zuckerberg started Facebook at Harvard in 2004 at the age of 19 for students to match names with photos of classmates. He took Facebook public in May 2012; he now owns about 12% of the company’s stock. In December 2015, Zuckerberg and his wife, Priscilla Chan, pledged to give away 99% of their Facebook stake over their lifetimes. Facebook, the company, rebranded as Meta in October of 2021. Richest people in the world 2022

Back To The Past! The Major ’80s Fashion Trends Stirring Things Up In 2022