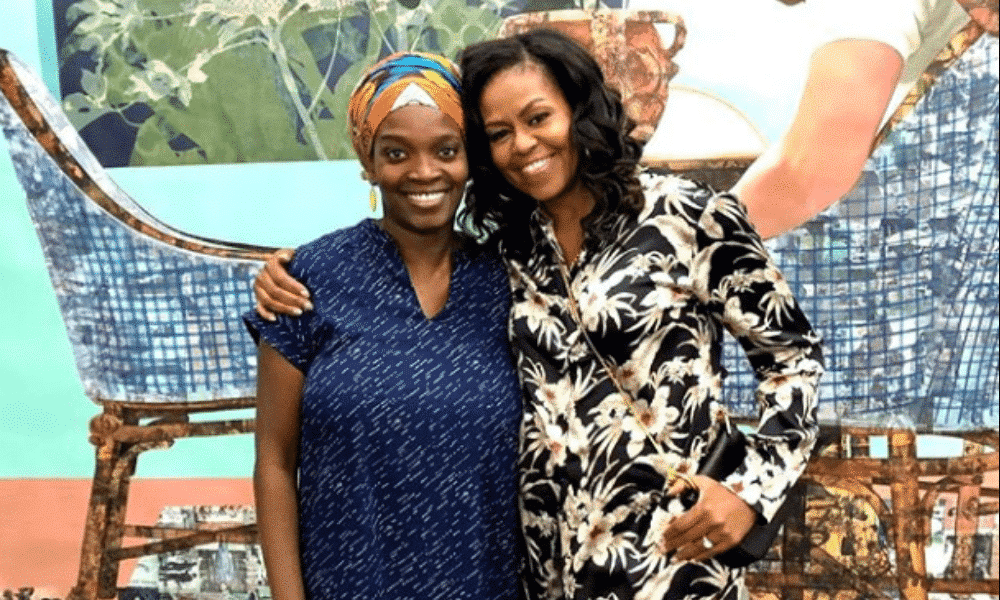 The Most Rave-Worthy Looks On Women Across Africa – November 23rd

Michelle Obama visits Njideka Akunyili-Crosby’s studio, Kirikiri prison boss detained over fraud, Sterling in talks with Manchester City over contract renewal. Stay in the know with our Rave News Digest which summarizes five of the hottest global news you need to catch up on, saving you time and energy. Consider it your daily news fix.

The authorities in Nigeria say they’ve arrested the head of maximum security prison Kirikiri, Emmanuel Oluwaniyi and a doctor, Hemeson Edwin working at the prison after an internet fraudster was able to carry out a $1m (£800,000) scam whilst serving a lengthy sentence.

The Economic and Financial Crimes Commission says the two prison staff were arrested for falsifying medical reports that enabled Hope Olusegun Aroke to get treatment outside the prison in a police hospital.

Whilst in prison he had access to a mobile phone and the internet. He was also able to visit hotels and attend parties. Aroke was originally arrested in 2012 and was charged with obtaining money under false pretences and forgery.

A senior anti-corruption official in Liberia has quit, citing the government’s failure to pay his salary and benefits. In his resignation letter published on Tuesday, J Barnard Nagbe – the comptroller at the Liberia Anti-Corruption Commission (LACC) – said he had quit because working without pay and benefits was “nonsense” and “unbearable”.

“I have never had this experience in my professional life and never am I prepared to endure this nonsense. I cannot and will not never work without pay,” he said.

President George Weah’s government has been hit by a series of high-profile resignations recently, as the country grapples with difficult economic conditions and a cash-crunch. The government had also fallen behind in paying lawmakers, health workers and teachers.

The United States former First Lady Michelle Obama has paid a visit to Nigerian-born Njideka Akunyili-Crosby. Njideka, a renowned artist received the ex-first lady Michelle Obama in her California studio. The visit, which happened on Saturday, was made known by Njideka’s sibling, Chidiogo, via her Instagram handle.

Chidiogo had hash-tagged Njideka and posted: “So this just happened! Casual Saturday in the Akunyili Crosby family. When the Michelle Obama pays a visit to your studio!”

The acclaimed global artist, Njideka Akunyili-Crosby, was recently profiled in the 2019 TIME Magazine ‘100 Next’ list.

4. Lebanon’s Saad Hariri says he does not want to be next PM

Lebanon’s outgoing Prime Minister Saad Hariri announced on Tuesday he does not want to lead the next government – a “decisive” move he said aims to expedite the formation of a new cabinet in the protest-hit country.

Hariri resigned last month, bowing to popular pressure from a nationwide street movement demanding a complete overhaul of the government. Since his resignation on October 29, Lebanon’s bitterly divided political leaders have yet to name a new premier or form a new government.

“I am sticking by the rule ‘not me, rather someone else’ to form a government that addresses the aspirations of the young men and women,” Hariri, Lebanon’s leading Sunni-Muslim politician, said in a statement.

5. Raheem Sterling in talks with Man City over a new long-term deal

Manchester City has opened talks with forward Raheem Sterling about a new long-term contract. Sterling, 24, signed a deal in November 2018 that runs to 2023 but City is keen to secure his future.

It is understood any new contract would see him become one of the highest-paid players in the Premier League. He won the 2018-19 Football Writers’ Association Footballer of the Year award and has been praised for his public stance on racism in society.

The Most Rave-Worthy Looks On Women Across Africa – November 23rd