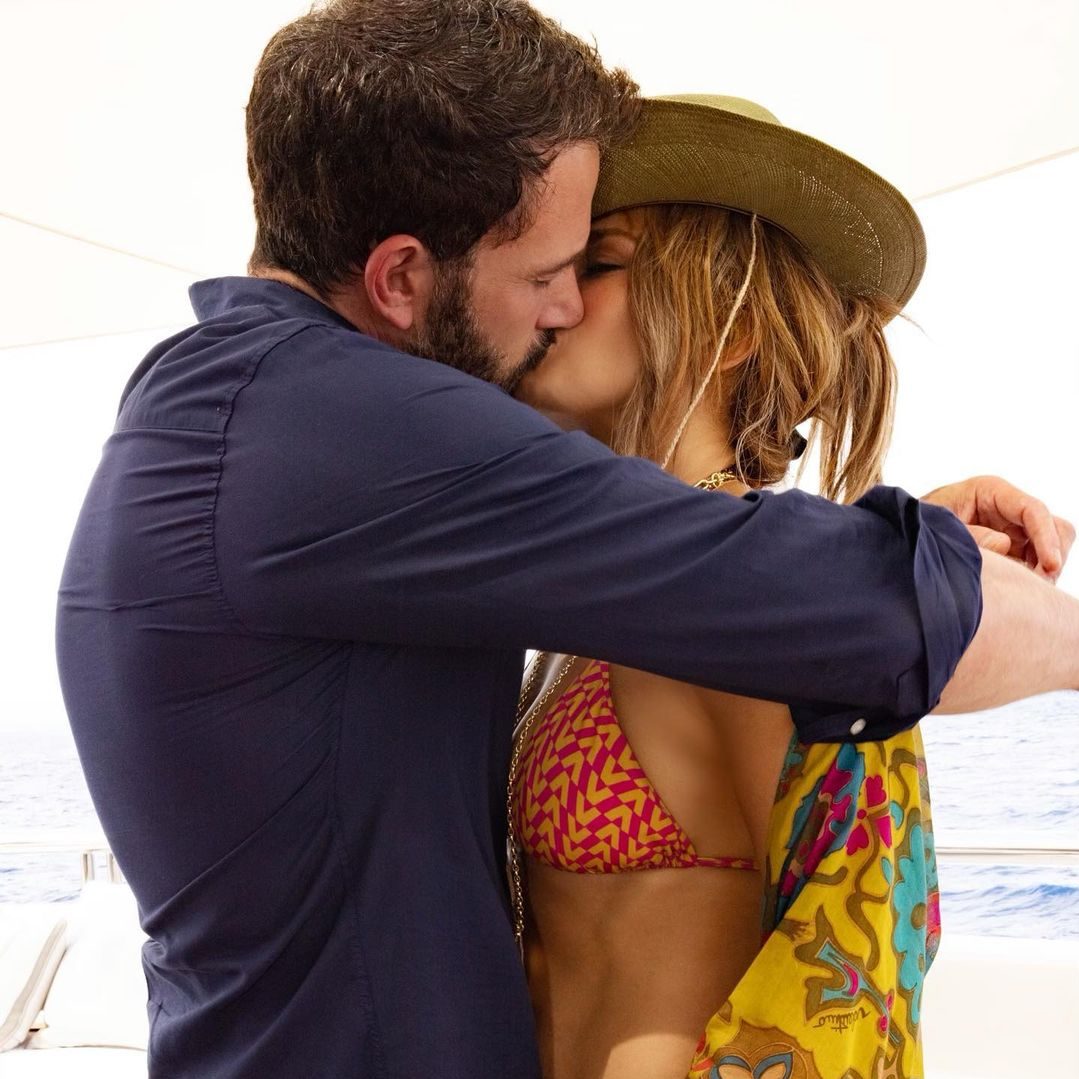 Bronx-born entertainer and business mogul, Jennifer Lopez turns 52 today, July 24. Things look very different from her birthday last year as the “Cambia El Paso” singer is celebrating her birthday with Ben Affleck! As if to clear all doubt of their rekindled romance, the couple shared a passionate kiss aboard a boat on Saturday. In the photos, which Lopez shared on Instagram, she’s seen in a two-piece bathing suit, styled up with a vibrant caftan, gold jewelry, and an olive-colored sunhat. Ben Affleck, 48, on the other hand, stayed true to his laid-back style in a navy blue casual button-up shirt and khaki-tone pants.

On Thursday, during her star-studded 51st birthday bash, Leah Remini shared a video of Affleck with his arms around Lopez and Remini. Somehow, Jennifer Lopez seems to always have her cake and eat it in all aspects of her life. A lasting love, however, remains the one thing she’s yet to conquer so fans are hoping that Ben Affleck holds that key.

J.Lo, as she is popularly known, began her professional career in 1989 and has since grown into a global phenom. The Hollywood sensation boasts an impressive net worth, and in celebration of her birthday, we’re putting the spotlight on her impressive achievements, so far.

As one of the highest-paid actresses in the history of Hollywood, Jennifer has moved fluidly between singing, acting, dancing, motherhood, and business and she has a world of accolades to show for it.

Puerto Rican by origin, Jennifer Lynn Lopez was born in the Castle Hill neighborhood of Bronx, New York to immigrant parents, David Lopez and Guadalupe Rodriguez. Her parents came to the United States from Puerto Rico when they were just children. Puerto Rican culture involves a lot of music, dance and arts, and the Lopez children were encouraged to hone their talents. J.Lo would later describe her upbringing as strict except that she was allowed to participate in arts and sports.

As a teenager, Jennifer Lopez took dance classes for ballet, jazz and other styles and even taught dance to younger students. One of her students was Kerry Washington. By 18, the budding dancer dropped out of college to pursue a career as a professional dancer. She first enrolled full-time at Manhattan’s Phill Black Dance Studio which caused her mother to kick her out of the house and disrupted their relationship for eight months.

J.Lo went on to feature in a number of Broadway musicals that had her touring America, Europe and Japan. During this time, she also featured in music videos for a number of artists like Doug E, MC Hammer, and Janet Jackson. Her first big role as a professional dancer was as a Fly Girl on the comedy TV sketch, In Living Color. She later decided to pursue an acting career, and in 1994, started on the television show, South Central.

By the time she transitioned from television shows to movies, she was racking in award nominations and positive reviews for her tremendous acting. The star played the role of Selena in the 1997 biopic, Selena, where she was rumored to be paid over $1 Million (USD) making her the highest-paid Hispanic actress in history. J.Lo continued to act in blockbusters like Anaconda (1997), U-turn (1997), Out of Sight (1998), Antz (1998) and her latest film, Hustlers (2019), among others.

Jennifer Lopez: Businesses and net worth

In April 2002, J.Lo opened a Latin cuisine restaurant, Madrè’s in Pasadena, California. The launch of which was star-studded and garnered international media coverage. By September 2006, the businesswoman delved into the world of fragrance and released her first fragrance collection, Glow by JLO. It became the top-selling fragrance of the time in the United States. In October of 2003, she released her second fragrance line, Still Jennifer Lopez.

Further digging her heels into business, she explored the world of fashion with the launch of her label, Sweetface with Andy Hilfiger. Lopez’s fashion and fragrance businesses generated over $300 million in revenue throughout 2004, which made her the 19th richest person under 40. In February of 2020, J.Lo announced her collaboration with DSW to exclusive market and sell her shoe line, JLO Jennifer Lopez. While in December 2020, she launched her skincare line, JLO beauty.

As of March 2020, the businesswoman was ranked in Forbes as America’s #97 self-made woman with a net worth of over $150 Million (USD). However, Celebrity Net Worth estimates that she is worth a whopping $400 million, having earned most of her money from acting, singing, hosting, producing, and more.

Jennifer Lopez’s love life has very often stayed in the media eye because of the array of celebrities that she has been linked to over the years. From Sean Combs (AKA P.Diddy) to Chris Judd–a professional dancer and her backup dancer at the time, Ben Affleck to Marc Anthony, and Alex Rodriguez back to Ben Affleck, J.Lo’s love stories have made it to the front page of countless publications. Her relationship with Affleck received so much media coverage that the couple were even branded Bennifer, a first even for Hollywood’s tabloids.

After the success of her third studio album, ‘This is me…Then’ (which she dedicated to Affleck), the duo got engaged, but sadly broke things off a few months prior to their wedding. The couple said they couldn’t deal with the continued media scrutiny surrounding their relationship but remained friends even through her third marriage to singer, Marc Anthony. She was married to Marc for seven years and share twin children, Maximilian David and Emme Maribel with him.

After her divorce from Marc, J.Lo began dating New York Yankees baseball player, Alex Rodriguez, and the pair dated from 2017 to early 2021 when they announced their split. They had gotten engaged in March of 2019 but had to postpone their wedding twice due to the pandemic. After their subsequent split, fans were delighted to see that the Bennifer train was back on track as she reunited with her long-lost love, Ben Affleck. Earlier this month, the couple was rumored to be making plans to move in together.

As you can imagine, Jennifer Lopez has led an inspiring life, and the successes she has recorded are proof of her hard work, discipline, dedication and commitment––all of which the people closest to her, including Marc Anthony, have attested to.

How To Style Red And Pink Like A Pro: 11 Contemporary Looks That Are Just Perfect