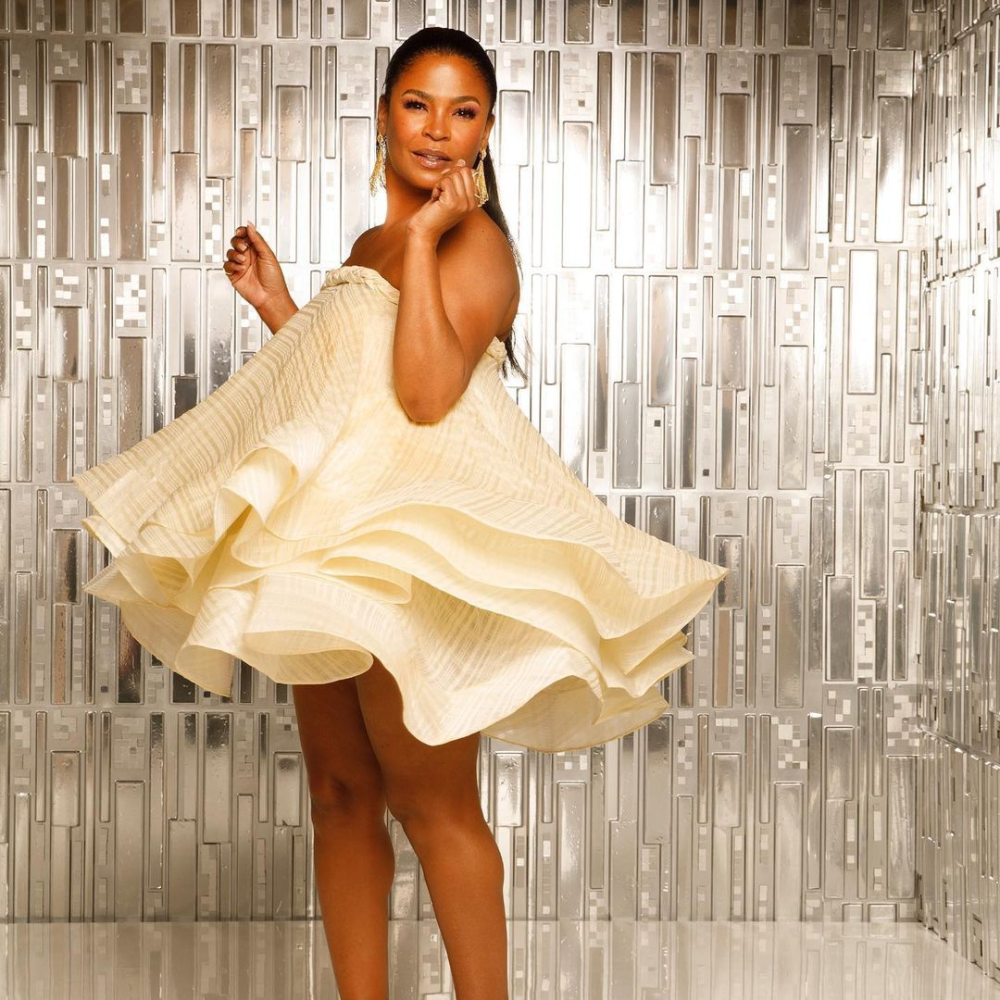 lack girl magic is one of the best movements to hit our scenes. It has changed our perspective on life and given us a chance to prioritize ourselves. Every day, I see the angry black woman narrative slide down the drain, and more black women are choosing to live out the higher versions of themselves. Regardless of the curve balls, life continues to fling at us. Even amid chaos, we choose to herald positivity and look at the glass as half full. If that’s not progress, I don’t know what is.

A black woman’s strength hits differently each time her story is told. How strong can one be after a painful breakup? Or how fast can they rebuild their lives after that? Nina Talita Long has shown that life is a choice you make daily.

Long is a well-known American actress who has had a successful career in both film and television. At 52 years old, she continues to be a leading figure in the entertainment industry and is admired for her resilience and positive attitude. Recently, Long revealed she and her partner Udoka had separated. Only for a romance rumor to spark between her and Omarion. Could this be a rebound, love, or mere rumor created by curious fans?

In 2010, Nia Long, a New York City native, met Ime Udoka, an NBA coach of American-Nigerian origin, in Boston. In 2011, the pair got together and started dating. They got engaged in 2015 but had no plans of tying the knot.

According to Long, getting married is not one of her top priorities. Instead, she and Udoka were concerned with making their relationship work without getting legally wed. Long and Udoka appeared to agree that marriage is not necessary for a fulfilling relationship. In any case, she and Udoka had a great relationship full of love, care, and joy. And while they were together, she did a good job of juggling family life and work. Standing in as a working parent, it’s safe to say Long made it look easier than it is.

Late last year, trouble sprang up in paradise. News broke out about Udoka’s alleged affair with an unidentified woman. He was also suspended for the 2022/23 NBA season. The duo formally broke up in December 2022. Udoka simply made a statement where he apologized for disappointing everyone, especially his family.

Her approach to healing and self-love

With the way she opted to heal and get herself back, Long demonstrated strength and capability. She co-produced the new film “You People.” In the film, she portrayed Amira’s mother, Fatima Mohammed. This motion picture explores the conflict between two cultures.

Next stop on Black Girl winning, in a since-deleted post, Long got herself a new place and was only full of gratitude. She found a home in the Hollywood Hills Oasis and bought it for $3.6 million immediately after her breakup with Ime Udoka. The house is a 3180 sqft that consists of 4 bedrooms and bathrooms. Although she deleted the post, trust “The Shade Room” to pick up on fresh gist. They captioned the post on Instagram, “Okay!!! #NiaLong giving thanks for new places and spaces.”

Her relationship with her son

As a woman who grew up with a single parent, Nia Long knew the importance of keeping a safe and peaceful family. While the public is out projecting a possible relationship between her and Omarion, the star chooses to focus on fostering a healthier relationship with her son, Kez Sunday Udoka.

When the news of the cheating scandal got out, Nia was most worried about Kez, and how affected he would be after getting the news. “I think the most heartbreaking thing about all of this was seeing my son’s face when the Boston Celtics organization decided to make a very private situation public,” she said. Long abandoned her ordeal to focus on her son’s mental health and make sure he is doing okay. In another recent post on Instagram, she uploaded a picture of herself and Kez, and tagged it “This is Love! 😘.”

During the premiere of her new movie named “You People,” a Shade Room video of Nia and Omarion holding hands and hugging was released on the internet. Rumors kept circulating on the internet about an alleged relationship with the former B2K member. Long set the records straight, “Everybody simmer down. I’m single AF,” she revealed.

On staying happy and positive

Nia has made a conscious decision to prioritize her emotional well-being and that of her children over any potential conflicts or drama that may arise. This suggests that Nia values her emotional stability and relationship with her children. That’s what most mothers do, they’re always willing to make sacrifices or avoid certain awkward situations for peace’s sake.

This example is worthy of emulation. More Black women need to understand the blessing that is called self-love and worth. It leads to a peaceful and fulfilling life. As Black women, this should be an inspiring nudge to overcome societal challenges and pressure. You are not obligated to take back a cheating partner. You shouldn’t be worried if others feel you can’t keep a man and lack tenacity. It’s possible to forgive a partner who cheated but let it be solely up to you and not due to cracking under pressure.

Healing doesn’t necessarily mean forgetting or erasing the traumatic experience but rather learning to cope and live with it healthily. Ultimately, the speed at which one can heal from emotional trauma or difficulty is largely dependent on their own decisions and actions. You’re not on anyone’s timeline. Take your time to do what’s best for you.