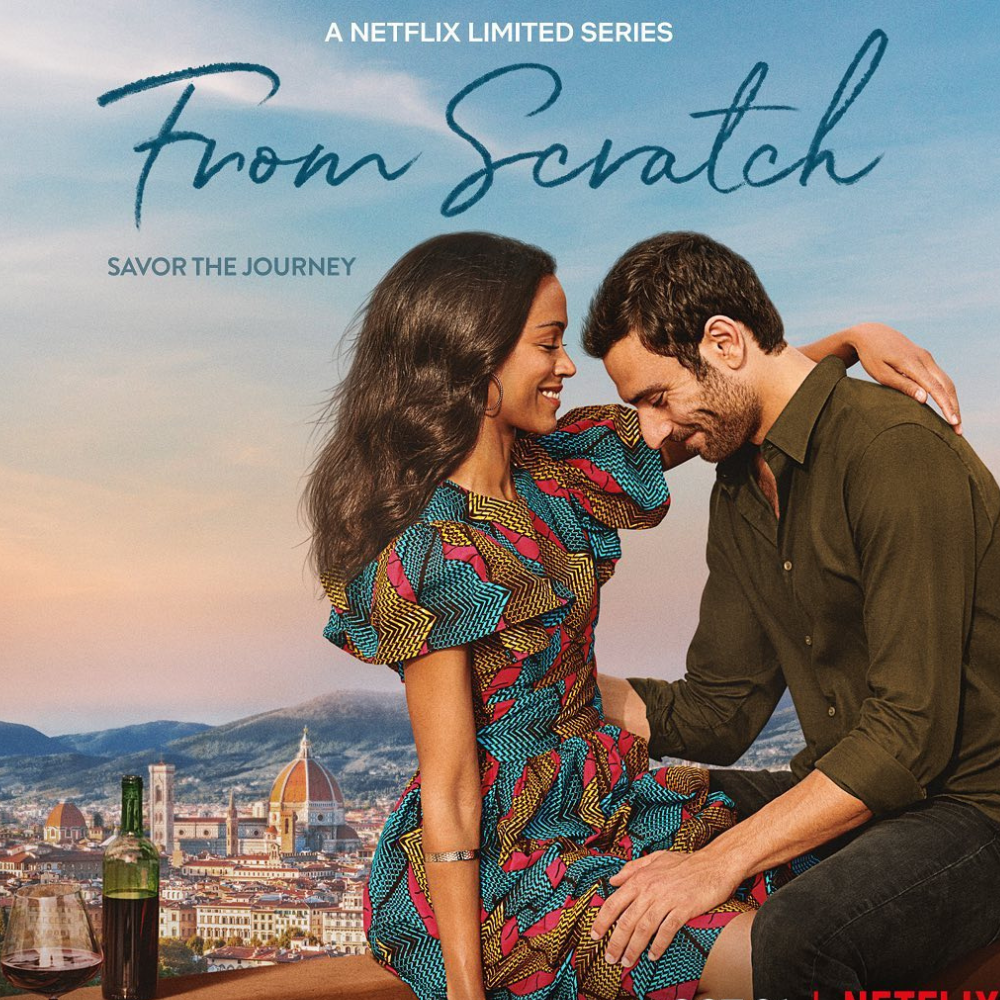 isclaimer: If you still haven’t seen the series, From Scratch, this is a full-on spoiler. Tread carefully. But if you’re like me, you’ve seen it and have a million and one opinions, let’s ride. For someone who loves happily ever afters and perfect love stories, I struggled to make it through this series. It started sweet — typical rom-com boy meets girl, and it slowly went sour. The tears couldn’t stop rolling down. It made me realize that love isn’t always what we envision it to be. It’s a raw commitment to another person. One that can stand the test of time, race, traditions, and societal expectations if we let it.

The series From Scratch was inspired by author Tembi Locke‘s novel “From Scratch: A Memoir of Love, Sicily, and Finding Home.” Knowing this was based on a true story further tugged at my heart. This story provided a glimpse of the struggles our Black ancestors encountered when it came to interracial marriages. The risks of being ostracized, the identity crisis it could cause the kids, and the strain it could potentially put on this kind of union. But is love enough?

Here are a few lessons I learned from The Scratch…

#1. Not all romantic movies are cliché

The story was well-written, slowly revealing the conflict after selling the cliché love story to its audience. It started with an American girl in a new city who falls in love with an amiable Italian chef. The two moved to a different city to start things from scratch. They finally find their zen, things are starting to look promising for both of their careers, and then poof! A positive cancer diagnosis.

To my relief, Lino beats cancer for the first time. While he wallows in this great news, his celebration was cut short by the demise of his father. This emotional rollercoaster goes on all through the episodes. One minute, I’m giggling at the new mom struggling to put her baby to sleep, and the next, my heart’s in my mouth waiting on Lino’s test results. It seemed like these love birds couldn’t catch a break, but all they had was their unfazed love—which I’d admit in this case—was enough.

Amy’s mother, Lynn, made a speech at the wedding dinner that might have dampened the mood a bit, but it was only unadulterated truth. She said; “Marriage is like a shoe. Well, like a journey in a shoe. At some point in time, no matter what you do, how tight you tie ’em, you’re going to get a pebble in your shoe. What most people don’t know. Hell, some of y’all up in here right now don’t know—that a good marriage permits you to face that pebble before it becomes a boulder. Because limping ain’t living…”

At first, when I learned about Lino’s sickness, I thought his death was going to be quick. Then I thought their love would end up becoming an unexplored feeling she would have to yearn for all her life. Like a case of would-have-been. But years passed, and their hearts intertwined, and instead became deeply rooted. All skepticism was out of the window, and I realized they were going to keep kicking the pebbles off their shoes, no matter how long it would take.

Love is a choice, but it’s not one you make without conviction. It was mutual and reciprocated, and respect for the other person was an obvious fact. It just shows that if a person truly chooses you, (s)he will do everything to have a life with you.

The male ego. Is it innate or fueled by societal expectations? I’d think it’s both. You can see Giacomo, Lino’s dad, struggling with his humanity and ego. Only till the fear of death suppressed the fear of shame did he succumb to his conscience and fatherly love. The father-son duo also had to start from scratch, making do with the little time they had left. It was surprising to see how emotional Giacomo could be. The facade of toxic masculinity was gone, and all that was left behind was a human who feels and is unafraid to let it out without second thoughts.

It shows the negative impact of patriarchy and the weight it places on men to be “strong.” In my opinion, Giacomo showed strength when he allowed the scales of traditions to slip off him and became a pillar for his son to hold on to. Everyone needs a strong father in their corner, not one whose face is constantly squeezed because he believes that’s how men command respect, but one who lets the love well up and erupt unapologetically. Not everyone is privileged to have one, but if you are one, think again. Tomorrow isn’t promised.

#4. Family is what you make it

We don’t know the power of a solid support system until life comes at us. In Amy and Lino’s case, it’s their biological family. But family isn’t always blood, but those that stick it up for you no matter what. While some are gifted with this unflinching support, others have to earn it by being who they want others to be. As much as possible, never burn bridges.

These lovebirds had “crazy” families, but they always left the lines open. Imagine if 22-year-old Amy succumbed to her youthful exuberance and “cut her family off” for not actively supporting her career. This isn’t encouraging a person to stay put in toxic relationships but highlights the frailty and imperfections of the human frame. No one is perfect, but if they’re willing to fight for and with you—keep them. Life is already wild, it’s pointless to navigate it alone.

One second, Lino and Amy couldn’t keep their hands off each other. They were so full of life, and anyone who comes in contact with them could attest to the authenticity and purity of what they shared. The next second, an incurable disease slowly slides into their formidable fortress. Slowly and deceitfully, it snuffs the life out of a promising future. Nothing is promised, death is more certain than life, yet we shy away from that thought.

Amy was commendable to teach her daughter this truth. Shocked to hear that she (Idalia) would die, but accepting it as truth. As I grow older, it becomes clearer that we are not different from those who have transcended before us. It’s all in the way we look back at life. Lino could smile till the end, because much love surrounded him, and he even radiated love from within. A short life, but he was convinced he spent it well.

From scratch is a love story, but a pragmatic one. Idalia, their daughter, showed up, and the dynamics changed. The couple opted for adoption, even though they had Lino’s sperm stored. They opted for the adoption route because Lino didn’t want to pass on any lethal gene to his offspring. They had to keep going for Idalia’s sake, even when the walls were caving in. Most parents can relate to this. You get out of bed early to prep the kids for school, even when you’d rather be tucked away in bed, thinking about your life.

Leiomyosarcoma came right in and snatched Idalia’s Bobba from her. The sumptuous meals, intriguing bedtime stories, and a loving father vanished right before her eyes. But the honesty also prepared her for what was coming. You’re never ready to watch your loved ones die, even if you know it’s inevitable, but nothing trumps being taken unawares. Sometimes in shielding our children, we open them up to wounds we cannot heal. Let them know what they should. Let them feel what they can. Let them build what they have from scratch. But never leave their side.

The best advice Amy got during this heart-wrenching transition was, “Kids can handle anything if you tell them the truth.” It was wholesome to include the child in the process. Although they had to be twice as strong to pull it off. Parents are superheroes, give us our flowers.

It was tolerable for Amy to ditch the higher-paying job at the gallery because she knew what would give her satisfaction. It was worth a gamble for the couple to spend their savings on Lino’s pop-up restaurant. Every time, they were not afraid to start from scratch, because as important as money should have been, based on the intricacies of their marriage, these two chose their passion every time.

My Verdict: I needed painkillers after this mini-series because nothing prepared me for the intense tears I shed watching this. Their story might have been marinated with pain, but I want unadulterated love like that someday. If you have it, guard it. If you don’t, never give up hope.