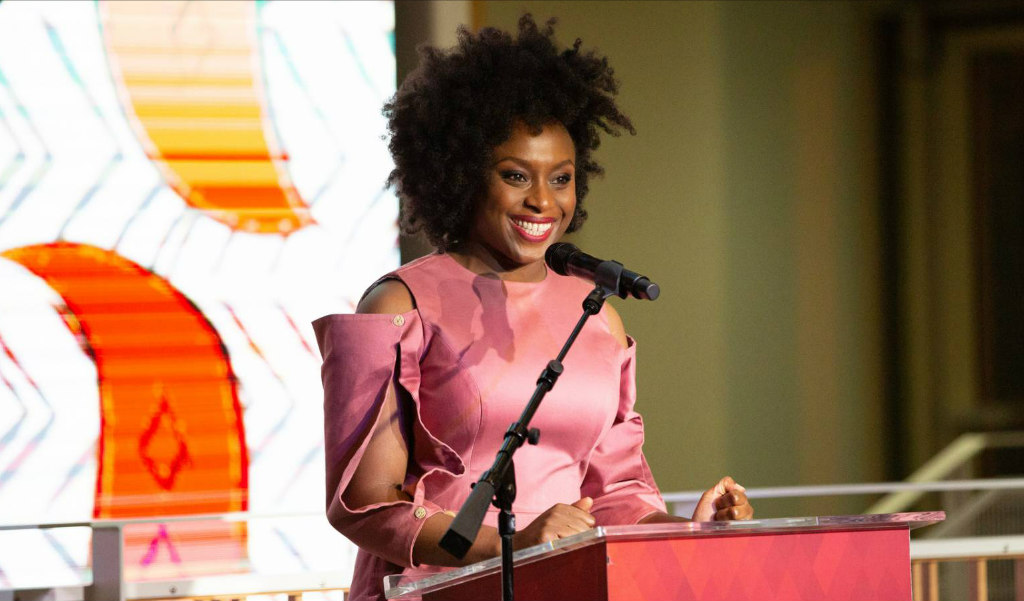 Beyoncé’s Ankara Suit At The Dreamweavers Exhibition Is Everything!

On September 17, 2018, Nigerian author Chimamanda Ngozi Adichie, a world-renowned novelist, cultural critic and feminist, won the 2019 Ev Rogers Award. She was honoured for “reframing the discourse on race, gender and identity.” The award was presented to her last week (February 7th) at the University of Southern California, Wallis Annenberg Hall Forum. Chimamanda Ngozi Adichie

The award honours the late USC Annenberg Professor Everett M. Rogers, whose Diffusion of Innovations is the second-most cited book in the social sciences. On hand to introduce Chimamanda was fellow African creative, the award-winning actress and playwright, Danai Gurira.

To receive the award, Chimamanda wore a pink button flap pencil skirt and pink top from the FIAMAIL collection by Fia Factory. With this look, she opted for a red lippie and carried her hair in a loosely curled afro. She finished off her whole look by matching her outfit with a pair of pink heels. According to USC Annenberg Dean Willow Bay, “Her singular voice and her power to inspire made Chimamanda Adichie the unanimous choice for the 2019 Rogers Award. Her visit to our school will continue the global conversation about race, gender and identity to which she’s contributed so eloquently.”

A path of success

Chimamanda’s first novel, Purple Hibiscus (2003), won the Commonwealth Writers’ Prize. Her 2013 novel, Americanah, won the National Book Critics Circle Award and was named one of The New York Times’ Ten Best Books that year. Her work has been translated into more than 30 languages. “The Danger of a Single Story” by Chimamanda is one of the most-watched TED talks of all time. She is also a MacArthur “genius” Fellow and a member of both the American Academy of Arts and Letters and the American Academy of Arts and Sciences, she was named one of TIME magazine’s 100 Most Influential People in the World in 2015. In 2017, Fortune magazine named her one of the World’s 50 Greatest Leaders.

Here are other shots from the event… Super Easy DIY: How To Make Your Own Lipstick

Beyoncé’s Ankara Suit At The Dreamweavers Exhibition Is Everything!