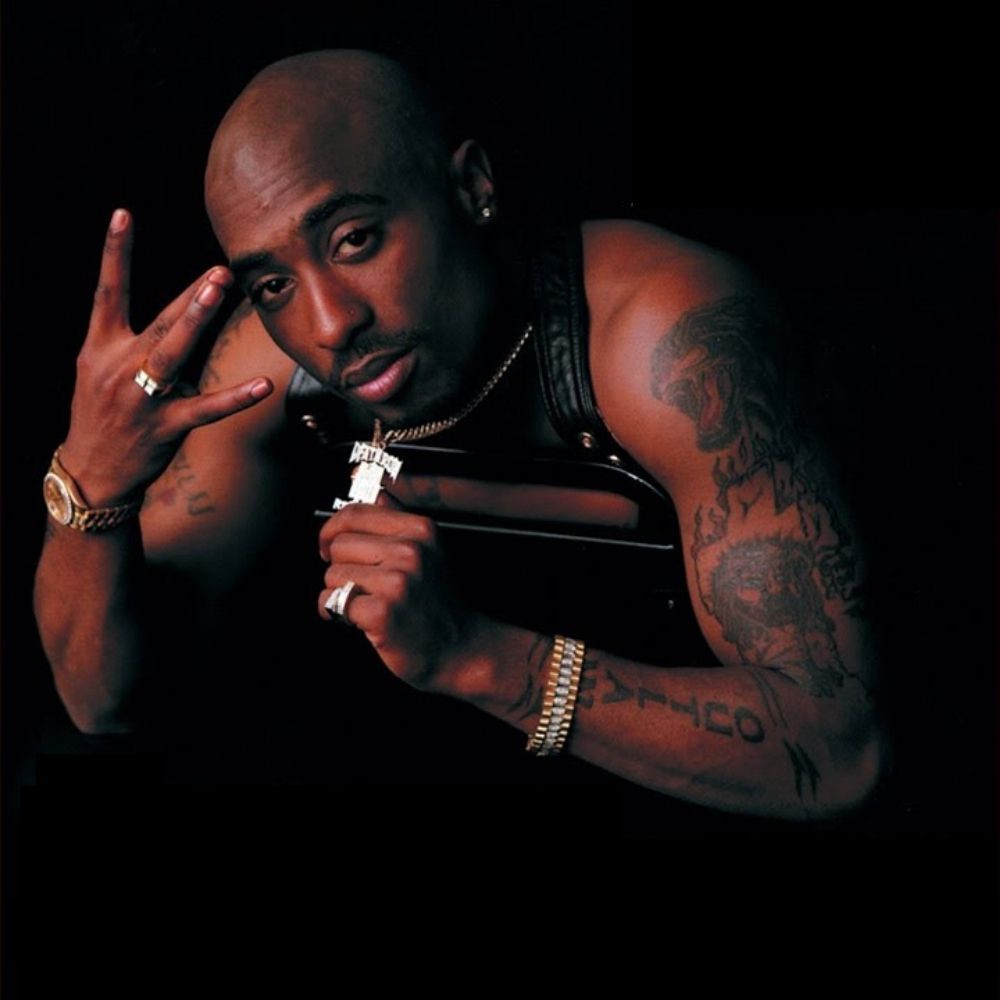 Tupac, whose birth name is Lesane Parish Crooks, was born in the Brooklyn neighborhood of New York on June 16, 1971. He was murdered on September 13, 1996, in Las Vegas. His mother was part of the Black Panthers, an African-American revolutionary movement. She spent a few months in prison before the birth of her son. She was imprisoned for having participated in the explosion of bombs in several districts of New York.

Shortly after giving birth, she renamed her son Tupac ‘Shakur’ Amaru in homage to the Peruvian revolutionary. Tupac Amaru, meaning “shining serpent,” and Shakur, “thankful.” Tupac spent his childhood roaming from home to home with his mother, his half-brother and his half-sister.

The legend of the “Black Prince”

In 1993, Tupac created the group “Thug Life,” made up of friends and his half-brother Mopreme. On September 26, 1994, the band released the album “Thug Life: Volume 1”, which will be their only record. Tupac coined the acronym “THUG LIFE,” which means: “The Hate U Give Little Infants Fucks Everybody” (“The hatred that you transmit to children destroys us all”). This term for Tupac is a philosophy of life. “Thug Life” refers to a person who starts from nothing, overcomes all obstacles, and succeeds in achieving his goal.

Thus, the well-off and wealthy are not affected since they don’t really have to struggle to survive. The rapper uses this expression very often that it is automatically linked to him. However, he didn’t want the acronym to be connected to a criminal life. Despite the literal translation, he never considered himself as such.

The ode to his mother from 2Pac: “Dear Mama”

“Dear Mama” is a song that appears on Tupac’s third solo album, “Me Against the World.” The song topped Hot R & B / Hip-Hop Songs for a week and Billboard Hot Rap Songs for five weeks. Also, it earned ninth place on the Hot 100. On July 13, 1995, it was certified platinum. It is considered the most beautiful song of 2Pac, making it the most respected. Besides, it is one of the greatest songs in hip-hop. In fact, among Tupac’s songs, “Dear Mama” is the one with the most success.

On February 13, 1996, Tupac Shakur released the first double album in rap history, “All Eyez On Me,” where we find the hit “California Love,” featuring Dr. Dre. He is considered one of the most influential in hip-hop history and one of the most important of the 1990s. The album comprises many features, such as Snoop Dogg, Thug Life, and his other group Outlawz. Upon its release, the album received critical acclaim. It is the second best-seller among 2Pac albums.

Two months after its release, it was certified 5x platinum, in 1998 9x platinum, and in 2014, 10x platinum, diamond disc. In 1997, Tupac Shakur’s “All Eyez on Me” won the prize for “Best R’n’B / Soul or Rap Album” at the Soul Train Music Award. Also, he won the “Best Rap / Hip-Hop Artist” award from the American Music Award, the same year.

“California love” is one of the two singles of this double album, in feat with Dr. Dre. It was very successful when it was released and was number 1 on the Billboard Hot 100 for two weeks. In 2004, it was ranked 355 out of 500 by Rolling Stone magazine in “Rolling Stone’s 500 Greatest Songs of All Time.”

The clash track “Hit ‘Em up” from Tupac Shakur

“Hit’Em Up” was one of the most hateful and virulent rap songs (diss song ). He pushes the provocation to say that he had an affair with the rapper’s wife, singer Faith Evans: “You claim to be a playa, but I fucked your wife!”. This started the war between the rappers of the west side (Death Row Records), represented by 2Pac, and the rappers of the east side (Bad Boy Records), represented by The Notorious BIG.

Tupac Shakur began his acting career in 1991 in “Phantom Court.” But it was in 1992 in “Juice” and 1993 in “Poetic Justice” with Janet Jackson that people noticed him. Subsequently, he appeared in several films, almost all released after his death, in “Bullet” in 1996 with Mickey Rourke, in “Gridlock’d” with Tim Roth in 1997, and in “Unscrupulous Cops” in 1997, where he plays the role of a detective alongside James Belushi.