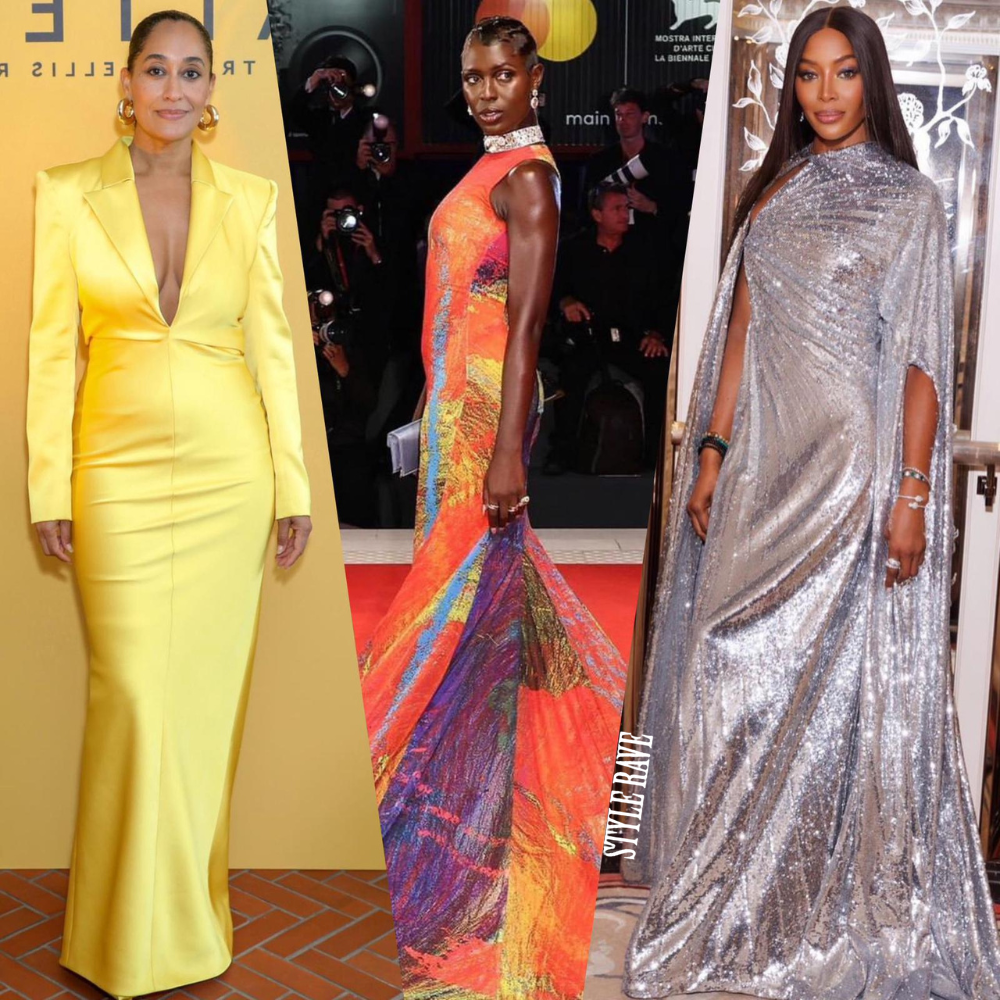 rom January to December, celebrities took turns to dazzle and wow when it came to fashion and style. Looking back at the year in style, what continues to stand out are the intricately crafted designs, the beauty takes, and the matching charisma that made us swoon all through 2022. Well, it’s that time of the year when we look back at the year’s best celebrity style moments that stole our hearts and made us gasp at our screens.

This year, celebrities went hard, either at the Met Gala, film festivals, fashion weeks, movie premieres, press tours, or award shows. There were more than a few Black celebrities who understood the assignment, making exciting statements on and off duty, and it’s a pleasure to often reminisce.

Black-ish star Marsai Martin said, “hold up, let the slay intensify.” How else do you describe this 18-year-old’s steady sartorial strides among other wins? The youngest Hollywood producer made her runway debut at Missoni’s fashion show in Milan, launched her reusable nail brand, MaribyMarsai, and made an appearance at Rihanna’s Savage X Fenty Vol. 4 show. Needless to say, Martin continues to redefine her personal style as she transitions into young adulthood.

At the WACO Wearable Art Gala, Martin snapped in a dramatic Julian Mendez look, and on her 18th birthday, she showed that her recent style takes haven’t been a fluke as she rocked a green Dashone by Dash number with gloves — perfection. It might take some getting used to, but the child star-turned-stylish adult isn’t showing signs of slowing down.

The Academy Museum Gala was IT for Thuso Mbedu as she show-stopped in a Giambattista Valli number which featured a grand high-low skirt styled with a floral embroidered crop top, soft makeup, and short blonde hair. The Woman King star spent half the year making “cover girl” appearances and interviews, and she did that decked in major fashion takes.

At LACMA, Mbedu looked ravishing in a pleated Gucci dress. The star also dressed in a menswear-themed outfit for a Louis Vuitton dinner held in London, and it was a case of a hit bringing in the heat. With all these and more, it’s no surprise that the South African actress is one of 2022 most fashionable Black celebs. And at this rate, we can’t wait to see what the coming years bring.

A full-on animal print dress when done wrong winds up as tacky, but it’s nothing to be shocked about when Kelly Rowland slayed to perfection at the AMAs wearing a strapless, high-slit leopard print Nicolas Jebran gown. For the most part of the year, Rowland opted for sassy looks that accentuated her feminine side. This has been her style tone through 2022, and even when in a suit, the lady is indeed a lady in full bloom.

For the iHeartRadio Awards, Rowland wore a woven Georges Hobeika fringe dress, and then she did a thing at the Nope Movie premiere in a black sheer Mugler cut-out ensemble. It’s definitely safe to say this year activated Rowland’s wild side.

As long as we’ve known, Rihanna has been one with a Midas touch. Her music, beauty, and style all pass the vibe check. Rihanna steps out every time and gives the fashion world a buzz. Her unbothered sassy take on maternity style made a global stance for pregnant women and was soon emulated all over. Although the Fenty billionaire wasn’t present at the Met Gala, her pregnant sculpture was used to honor her at the Met Museum. Now, that’s influencing on steroids.

This year has seen the star maintain her high-octane fashion servings. For instance, the beautypreneur took to the streets of Fashion Week, credit to her SAVAGE X FENTY shows, to exhibit her groundbreaking style. Even her post-maternity looks slapped differently. For the Super Bowl, Riri opted for a comfy sporty look with an oversize jersey and matching denim bottoms. An icon in her rights and well-deserved one of 2022 most fashionable Black celebs. No cap.

Wakanda forever star Nyong’o kicked off the year exploring a few handcrafted cultural outfits as spotted when she attended a wedding ceremony decked in a traditional middle-eastern piece. Meanwhile, the Dolce & Gabbana Alta Moda show in Italy was another opportunity to showcase her eclectic style. The year seemed like a fun one for the adventurous actress who casually joined Tiktok and ate ants for lunch.

The Wakanda Forever press outfits were astonishing, to say the least. A fave was the shimmery high-slit Vivienne Westwood dress at the Black Panther: Wakanda Forever premiere in Lagos, Nigeria. And in Mexico City, the star rocked a flamboyant custom Jonathan Cohen cape over the brand’s black leather dress, complete with a loc’d updo and gothic face beat.

One of 2022 most fashionable Black celebs must be the ever-gracious Naomi Campbell. The seasoned model slayed all year round. The 51-year-old started the year as British Vogue’s cover girl while introducing her daughter to the world. Then walked the Balenciaga runway in an extravagant black dress. Dr. Campbell snagged countless campaign shoots and runway gigs and slayed through every show effortlessly.

The trailblazer was spotted at the British Fashion Awards in a custom silver Valentino number and poised through, per usual. The Red Sea Film Festival was another time Campbell shook things up in a statement Valentino. The wrap number she opted for featured elaborate feathers as sleeves and a flowy train crowning the queen of the runway with extra elegance.

Although Kerry Washington might have been without scandal in 2022, her ensembles made a public commotion, especially on the carpets. In past years, the focus would have been on Olivia Pope’s undeniable talent, but this year, the star refined her personal style. The star experimented with fancy embellishments, snazzy textures, and structured bodices.

At the NAACP Image Awards, Washington wore a Sergio Hudson corset dress with a floor-grazing train. On another occasion, Washington went viral in a Celia Kritharioti ensemble for the SAG Awards, proving that the color yellow was created for her. Ms. Washington also made a case for black in a Tory Burch number for the Met Gala. No doubt, this year, Washington showed us the right way to do couture.

Tessa Thompson was definitely one of 2022 most fashionable Black celebs, and it was evident in both her elevated street style takes and her flamboyant red carpet looks. The star girl started the year as a banging Covergirl for WMag and turned the Venice Film Festival into her edgy dress-up corner. One would easily believe Thompson was made for the red carpet.

The star continued to appear in basic-defying coordinations as she made her press rounds for the movie, Thor: Love and Thunder. Her liquid metallic Armani Privé dress and see-through golden interior NYC dress were one of the few looks that broke the internet. Thompson was on an adventurous sartorial streak this year, as no appearance was without an additional oomph.

Multi-hyphenate actress Tracee Ellis Ross never misses the opportunity to show off her unconventional style and penchant for larger-than-life takes on fashion. Shooting the season finale of Black-ish and launching the six-part docuseries, “The Hair Tales,” Ross didn’t take a break this year. The star tried it all — think suave menswear suits, sassy fringe outfits, and of course, bright colors that established her bubbly persona. Another year, another opportunity for celebrity stylist Karla Welch and her muse, Ross, to make magic, and the duo exceeded all expectations.

For one, Ross’ smooth Carolina Herrera look at the Oscars showed out. Then the Oscar De La Renta black dress at Vanity Fair was an obvious hit. When it came to suits, Ross slayed in an orange-pleated Robert Wun because normal is boring. This year, Ross celebrated her birthday in a LaQuan Smith cherry paillette bomber jacket, paillette leggings, and a matching bandeau from F/W 22 collection. Clearly, making statements with style is the star’s forte.

What a stylish year it was for Jodie Turner-Smith. The star’s red carpet moments were hard to miss. No jokes, Turner-Smith’s styling team—Wayman Deon and McDonald Micah—must have been on a fashion OD with their muse. Among other events, this was obvious at the Venice Film Festival in Italy where the star and the powerhouse styling duo proved that her versatility couldn’t be questioned. She went heavy on bold hues and daring silhouettes, and her glam team didn’t slack on the beauty game either.

The star went all out in a colorful Christopher John Rogers ensemble at the AmfAR Venice Gala on her 36th birthday — the color block trend never looked this fab. She maintained the energy at the London Film Festival, British Fashion Awards, and a slew of movie premieres. It’s safe to say Ms. Turner-Smith was arguably the poster girl for red-carpet hotness in 2022.