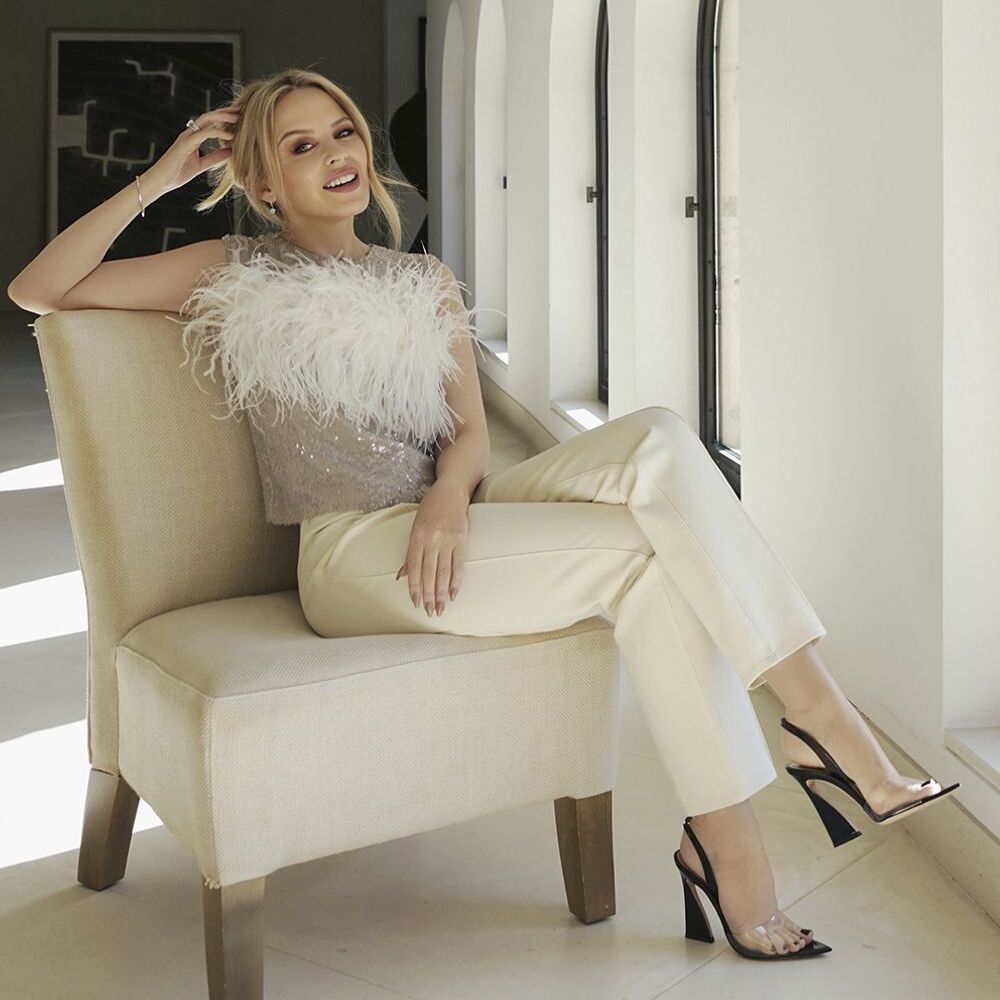 Kylie Minogue, the eldest of three children, was born in Melbourne and raised in the city’s suburbs. As a preteen, she started acting in Australian soap operas and TV shows before being signed to a record label in 1987. That year, her debut single, “The Loco-Motion,” was released and eventually became the bestselling single of the decade in Australia. She now has a reported net worth of $150 Million (Celebrity Net Worth).

Minogue gained fame for her dance-pop hits, including 2001’s “Can’t Get You Out of My Head,” which was one of the most successful singles of the 2000s. In 2020, she released her 15th studio album, Disco, which she recorded by teaching herself GarageBand and setting up a studio in her home during the early months of the pandemic. Also during lockdown, Minogue launched her wine label, Kylie Minogue Wines. The brand makes its U.S. debut this year with three rosés, starting with a Prosecco Rosé on April 11. The brand will also be available soon at Bemelmans Bar at the Carlyle hotel in New York City.

These days, Minogue, who lives in Melbourne, has also been working on new music. “I was on the treadmill a couple of weeks ago and…listening to a new demo, trying to figure out what’s good about it, what needs changing,” she says. “It helped me get quite a few more kilometers in.” Kylie Minogue Net Worth

Here, she speaks to WSJ. about feeling most creative in the early hours of the morning and what she does to relax.

Here are some things Kylie Minogue revealed to WSJ. Magazine… net worth

On what time she wakes up and the first thing she does:

On most mornings, the singer-songwriter, 53, finds herself awake at 4 or 5 a.m. and will listen to an audiobook for 20 minutes to fall back asleep. When she wakes up again around 8:30 a.m., the first thing she does is finish the water with lemon juice she keeps next to her bed. “That relieves some of the guilt about the coffee I am most definitely about to have,”

“I am partial to what we call in Australia a piccolo latte,” which she describes as, “a tiny little flat white, which is a tiny little latte.” Kylie Minogue Net Worth

On the time of day or week when she feels most creative:

It’s normally the early, early hours of the morning. I found when I was making my last album—because it was the first time I recorded myself, I had my studio set up at home—I would work through the day on sessions with other writers and producers. But if it was things to do myself, I’d tend to start doing that after dinner late and will tell myself, “OK, just 20 more minutes. OK, another 20 minutes.” And then it’s at least 2 in the morning and I’m thinking, “Shut it down, it’s time.” I really have to stop myself, and I think it’s a known fact that you tend to be more creative not during work hours.

I like to at the very least do 15 minutes on the Yoga Studio app. I know how to do it without the app but the tone of the woman’s voice and that it’s timed, it goes by so quickly. Then I feel like that’s done and I feel good. If there’s a treadmill nearby, I like to do that. We say in my family, “Minogues don’t run.” None of us run. But we like to walk, so that works for me. If I’m somewhere where there’s Pilates, I love that. I’ve also tried gyrotonics; that was really fun. I would say my ultimate workout is being on tour. I’m never as fit as when I’m on tour, so I can’t wait to tour again. My body needs it. Kylie Minogue Net Worth

[Laughs] Terrible. I kind of grab whatever’s there. A serum. A good old heap of moisturizer. Maybe some cream blush on the cheeks, just a little on the eyes. And mascara. And lip salve slash lip gloss.

On what she does to relax:

Eat with friends. I love to go to either a new place or, for example, in London, my local Spanish [restaurant] that I’ve been going to for 20 years [Cambio de Tercio]. I call it “the office.” I know what’s going to be on the plate; I love the team there. That’s like having a hug and a meal at the same time.

I’ve got a book that my girlfriend loaned to me, The Razor’s Edge by Somerset Maugham. The book that’s been my companion for the last year is Rosé: Understanding the Pink Wine Revolution by Elizabeth Gabay. I’ve managed to catch up on most of Succession and just finished Inventing Anna, which was brilliant. I’ve started Euphoria; it’s so well done. What a jewel Zendaya is. They used one of my songs [“Can’t Get You Out of My Head”] in the final episode of season two. The soundtrack is amazing, so I was glad to be a part of it.

Only value the opinions of people you respect. It’s a good one to keep in the back pocket. I was told that many, many years ago, long before social media. Kylie Minogue Net Worth

Style On The Move: Step Into World-Class Comfort And Styling With The New Crocs LiteRide™ 360