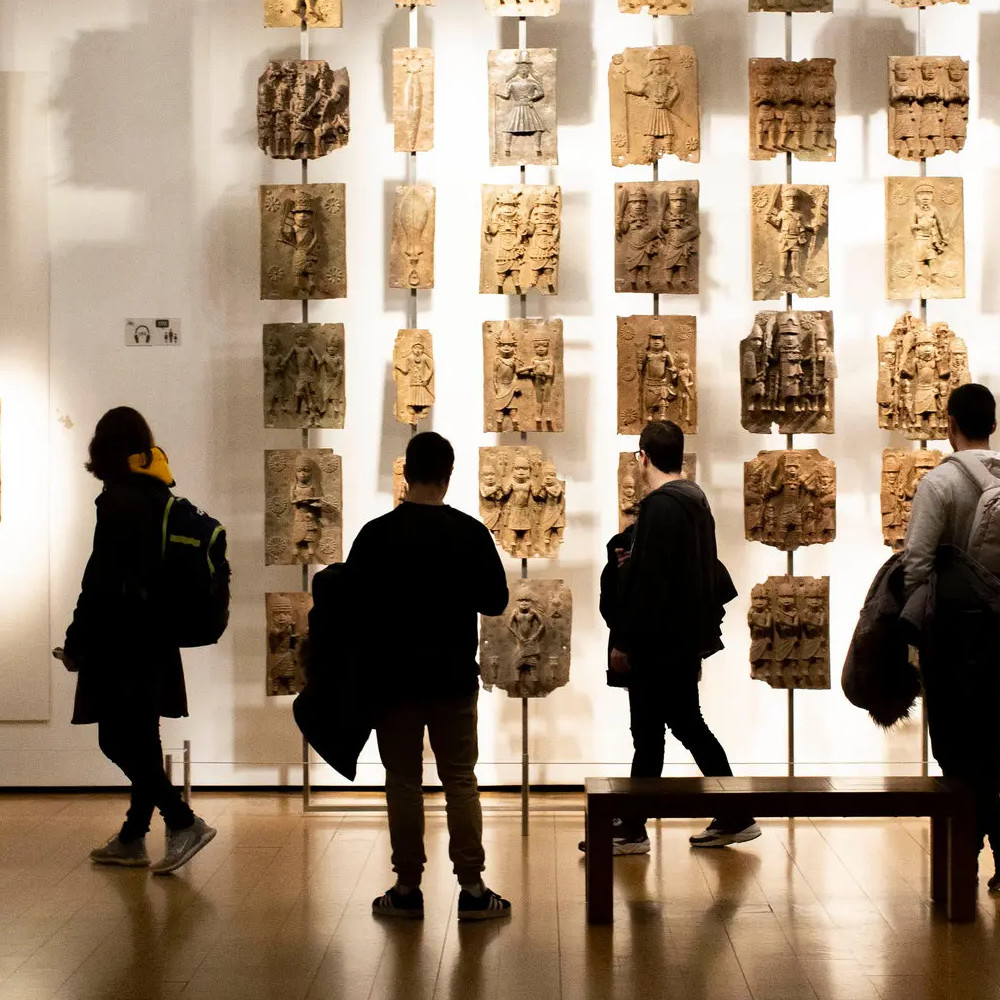 In 1897, the British, in what is known as “The Punitive Expedition,” invaded Benin (in present-day Nigeria), sacked its kingdom, and looted from the palace a vast collection of ancient artifacts and royal treasures. These artifacts were either given to individual officers or auctioned. They made their way into the British Museum, the Louvre in France, the Ethnological Museum in Germany, the Metropolitan Museum in the US, and other museums and private homes across the world. Igun street.

These priceless objects include ornately designed cast plaques, ceremonial brass heads of former Obas (kings), human and animal sculptures, ivory carvings and tusks, private ornaments, and parts of royal regalia. If you have seen any of the Benin treasures, especially the bronzes, you will agree that they are awe-inspiring witty works of art.

These extraordinary creations, produced from around the 16th century onward, were made by specialist guilds of artists for the royal court of the Oba. The bronze plaques adorned the Oba’s palace walls, decorated his special rooms, and provided vital records for his court and kingdom.

The magic of Igun street

Now, what is of great delight is that the specialist guild of sculptors who created these world-famous bronzes lived on Igun Street, known by Benin locals as “Igun Eromwon.” Today, this meandering street lined with old houses and shops will certainly blow you away with its sense of cultural magic. Although some of the shops seem in need of a facelift, that rusty feel adds to what makes Igun street even more special.

The shops stand with doors open like a revelation. Here, you will be greeted by intricately designed sculptures — miniaturized or life-sized, human or animal, bronze or brass — cramming the interior of the shops and staring at you. You will also see exquisite leopard, crocodile, and bird forms, each holding its own tale waiting for you to discover. There are also bas-relief artworks in these shops that deserve a place on your walls.

The feeling of looking into the shops and walking through this street of treasures compares with the feeling of opening a box bursting with gold. No wonder Igun street, this magical place of art-crammed shops, is a UNESCO World Heritage Site.

Inscribed on an arched sign at the entrance of the street, like a badge of honor, a handshake with history, and a proud tap on the chest are the words:

As you journey through Igun street mesmerized by the slew of amazing pieces of art, what’s likely to pull you back to reality will be the sculptors, both young and old, beckoning you to their shops. The sculptures, carvings, and plaques created by these master craftsmen are second to none and be rest assured that you’ll be purchasing a handmade piece. No mass productions. What’s more, these artisans working tirelessly day and night on this street are the descendants of the sculptors who created the world-famous bronzes that the British stole in 1897.

The sculptors of this guild are in the business of continuing the tradition of their ancestors who were masters in their craft. About seven big families are reckoned to be members of the guild. Although they aim to make money to care for themselves and their families, the reason they consistently show up is to preserve the secret techniques of their ancestors.

Shrewd secrecy surrounds the creation of these artworks because the Guild considers their craft second to none. As a result, many prefer to work in the secrecy of their homes. But you wouldn’t blame them. When you’re from a lineage responsible for some of the most sought-after and collected works of art in the world, you will definitely guard your family secrets.

These artists are known to still practice the “lost wax method” of sculpting. They mold a desired shape or image in clay and then coat this clay image with wax. Upon this layer of wax, they add a new layer of clay in the same shape as the first. The clay-wax-clay sculpture is heated to a temperature of around 700 degrees Celsius; the heat melts the wax, creating a cavity between the two layers of clay. Thereafter, molten bronze is poured into this cavity, assuming the shape of the desired image. When the hot sculpture cools down and the clay is broken off, the bronze masterpiece stares you in the face. It is tedious and time-consuming, but worth every sweat.

Yet, that’s not all it takes to create the kind of sculpture for which Igun street commands respect. There is also the process of cleaning and polishing. It is at this point the sculptors will tell you: “it is a secret from our ancestors.” They might tell you that their technique is imprinted in their genes or dipped in the blood of their lineage. But what is important is that this specialist guild of sculptors is carrying on a tradition dating from at least around the 16th century, still thriving in the 21st century, with no sign of fading away in the near future. And for this, we doff our hat to them.

Is Britney Spears’ Social Media Postings Something We Should Be Worried About?

12 Uber-talented Black Artists You Should Know And Support