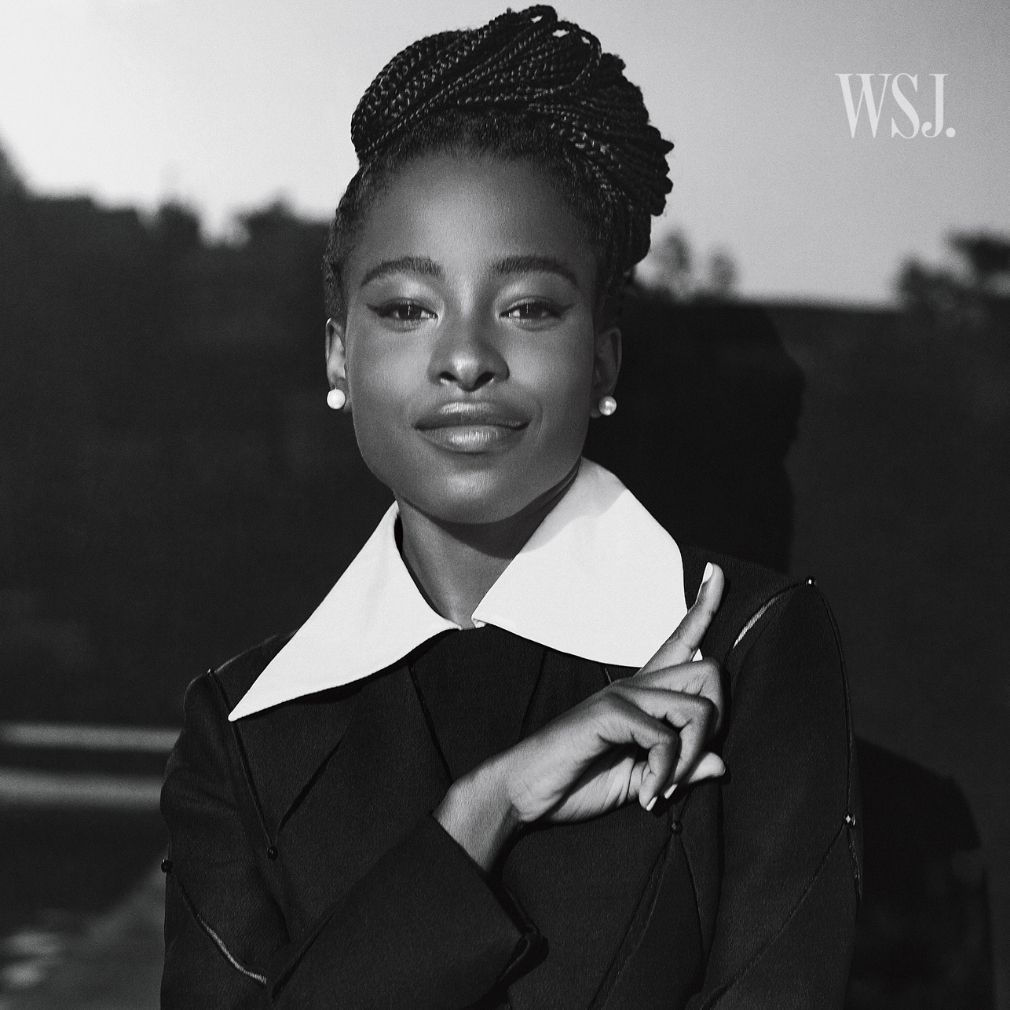 Inaugural poet Amanda Gorman covers WSJ Magazine’s Fall Women’s Fashion Issue! The striking cover and accompanying images were photographed by Cass Bird, with styling by Jason Bolden. In the cover profile, written by Clover Hope, Gorman opens up about her insecurities, her belief in the power of words to power a movement, and her ultimate goal of being POTUS!

The 23-year-old believes in the political power of verse and she’s leaning into her literary talents. “I realized I don’t have to change who I am to be a leader.” The poem she wrote for President Joe Biden’s inauguration, “The Hill We Climb,” wasn’t just the one that stuck; it instantly made Gorman into a cultural, political phenomenon. The final three lines alone served as an exhortation for a traumatized nation: “For there is always light / if only we’re brave enough to see it / if only we’re brave enough to be it.”

It was First Lady Jill Biden who recommended Amanda Gorman to be the inaugural poet. Biden had seen Gorman read at the Library of Congress in 2017, when the then 19-year-old had just become the country’s first National Youth Poet Laureate. In late December, when the inaugural committee invited Gorman to give the reading, she knew the moment would require a level of depth and clarity. President Biden was taking office after a drawn-out vote tabulation, and for the first time, a Black woman, Kamala Harris, would become vice president. Then came the January 6 attack on the Capitol building. Afterward, Gorman felt that her task had shifted to what she calls a “cleansing by way of words.”

“The only way I could show up as myself in that space was to recognize that darkness and light aren’t mutually exclusive,” she says. “There was no way I would have been able to write and then read a poem if I felt like I wasn’t speaking truthfully about what we had seen happen.”

For Gorman, the reading was “an out-of-body experience.” In the moments after, former President Bill Clinton told her it was the best inaugural poem he’d heard since Maya Angelou delivered “On the Pulse of Morning” at his own 1993 inauguration. “That was when it clicked for me that I had just stepped into history,” Gorman remembers. “We weren’t talking about something that was erasable in any way. It had become its own new page.”

Then, on March 30, Viking Books released her book, “The Hill We Climb: An Inaugural Poem” for the Country, with a million-copy print order. It became an instant bestseller. Gorman has since been at work on a new poetry collection, “Call Us What We Carry,” which she describes as “an interrogation of country, of pandemic, of promise, of change.” As part of her research, she’s been studying the 1918 flu pandemic. This September, she’ll also release a picture book, “Change Sings: A Children’s Anthem,” with illustrator Loren Long, who created the art for President Barack Obama’s “Of Thee I Sing: A Letter to My Daughters.” Both of these books will have million-copy print runs as well.

With “Call Us What We Carry” set to publish in December, Gorman now finds herself in a pivotal season. “I’m in a chapter of my life where everything is changing, meaning that I’m writing a collection while I am figuring out what it means to be Amanda Gorman, with this visibility and this microphone,” she says. “Writing feels like home to me fundamentally, even when everything else feels like a hurricane.”

#1. Gorman on her ultimate goal – being President of the United States

When children declare they want to be president—not just of their class but the entire United States—it’s usually a fantasy. Gorman committed to the idea at age 11 after her sixth-grade math teacher jokingly suggested she should run. Gorman recalls responding to him in earnest, saying, “You’re right. That’s exactly what I’m going to do.” She’s shared her plan to run in 2036 many times over the years: She wrote it as her career goal on a questionnaire for the L.A.-based WriteGirl, a mentorship program that pairs girls with women writers. She’s said it in interviews and had it mentioned in her alma mater’s newspaper, the Harvard Crimson, in 2018. When she confirms on the record again that, yes, she seriously wants to run for president, she makes it seem entirely feasible. “I think to make the impossible more proximate,” she says, “you have to treat it as if it’s in reaching distance.”

She has been scrupulous about her social media for this one purpose: campaigning for the presidency herself one day. And she plans on fulfilling this goal through poetry. “I used to think about it in the more traditional sense of, OK, we’re going to do this poetry thing for a little bit, and then you’re going to put the pen down and switch over to politics,” she says. “Being able to talk to people like Hillary Clinton and Nancy Pelosi, I realized I don’t have to change who I am to be a leader. If anything, those qualities will be what become my strength when I bring them into my field.”

#2. Gorman on the power of language in politics

“It’s often language makers who create a rhetoric for movement,” Gorman says. “They create a new type of dialect in which people can communicate shared dreams even if those shared dreams have yet to be realized.”

#3. Gorman on understanding the chaotic nature of the job of President

“I’ve always understood the potential of the presidency or political office to both be terrific and also toxic and terrible,” she says. She envisions herself not as the next Alexandria Ocasio-Cortez or Stacey Abrams, but as a new political hybrid merging Shirley Chisholm’s unyielding activism with the vitality of poet Audre Lorde. She is committed to issues of climate change, sexual assault, and human trafficking.

“I knew we were in the presence of someone special,” Obama says via email. “Looking at her, I see someone who can help us draw even closer to a better, more inclusive America—someone who will use her identity as a Black woman and her ability to connect with others to help reshape and repair the world around us.”

#6. Gorman on people commenting that she speaks so well

“When people used to say to me that I spoke well, I thought they were joking a lot of times. Either this is a jab at my race, or it’s a jab at my disability, and I don’t know which it is,” Gorman says. “I think that comments on my ability with words do come from a genuine place for most people. In my case, I was projecting a lot of my insecurities into people’s compliments. It wasn’t until I grew confident enough in myself that I could hear people praise me for my language and say, ‘Thank you. I know.’ I’ve been working a lifetime at this. I would hope I would be good right now.”

#7. Amanda Gorman on fashion and style

“All art is political. I would say especially fashion,” she says. “I think about what it meant for the Black Panthers to wear tilted berets, what it meant for African-Americans to show up in their Sunday best while marching during the civil rights movement. And what it’s meant to wear rainbow colors in terms of queerness. What it’s meant to wear white as a feminist. I love getting to find more superpowers in what I wear.”