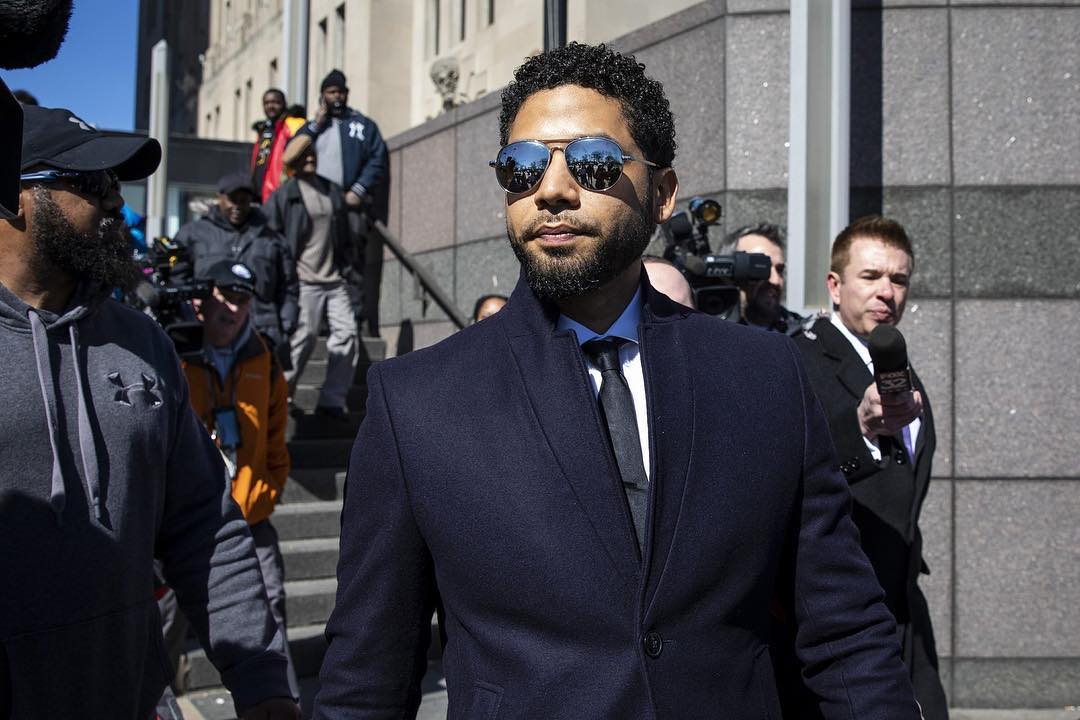 In what came as a shock to many spectators, prosecutors in the United States on Tuesday dropped all charges against Empire star, Jussie Smollett, in an incredible reversal the actor has termed vindication. The actor was accused of making a false report that he was attacked in the morning of January 29 in Chicago.

Smollett, who is black and gay, claimed that two masked men shouted racial and homophobic slurs, beat and poured bleach on him on his way home from a sandwich shop.

However, authorities earlier alleged that the actor knew the men involved and had orchestrated the attack, paying them to do so. Investigators said he made the report because he believed it would promote his career and give him a pay rise.

Smollett’s attorneys said his record was “wiped clean” of the 16 felony counts related to making a false report. In return for the dismissal, the actor agreed to do community service and to forfeit the $10,000 he paid to get out of jail.

The Mayor of Chicago and the Police Superintendent have publicly slammed the decision to drop the charges, with the former stating it as a “whitewash of justice” and that Smollett lied.

The actor has however insisted that he had “been truthful and consistent on every single level since day one.”

Anne McClain and Christina Koch, both female astronauts, were set to make history on Friday as the first all-female crew to conduct a spacewalk at the International Space Station. NASA however backtracked on the initial plan stating that Koch will instead be joined by male colleague Nick Hague due to suit availability.

The agency on Monday had stated that it has only one spacesuit size medium available at the station. It clarified on Tuesday that it has more than one medium-size spacesuit torso aboard but said to stay on schedule with the space station upgrades, “it’s safer and faster to change space-walker assignments than reconfigure spacesuits.”

It unveiled its new TV streaming platform, Apple TV+ in a foray into the TV streaming industry dominated by the likes of Amazon and Netflix. The platform will include shows from existing services like Hulu and HBO.

The app was unveiled by Steven Spielberg and is expected to launch in the autumn. Spielberg himself revealed that he will be creating some content for the platform. Other stars like Oprah, Jennifer Aniston, Steve Carell, Reese Witherspoon among others also took to the stage to reveal their involvements in TV projects commissioned by the tech giant.

Apple also announced that it would launch a credit card, gaming portal and an enhanced news app. The credit card, scheduled for launch in the United States in the summer, will have both an iPhone and physical versions. The news service app, Apple News+, will include more than 300 magazine titles including Vogue, Esquire, National Geographic and Rolling Stone. Unlike the credit card, the app is immediately available and will cost $9.99 per month.

And for the new games platform, Apple Arcade, it will offer over 100 exclusive games from the app store which will be playable offline. It will be available across 150 countries in the autumn but no subscription prices were given.

American singer Justin Bieber has decided to take a break from music and focus on his mental health.

In a lengthy Instagram post, the former teenage sensation explained that he had noticed calls for a new album by fans on social media

“So I read a lot of messages saying you want an album… I’ve toured my whole teenage life, and early 20s, I realized and as you guys probably saw I was unhappy last tour and I don’t deserve that and you don’t deserve that, you pay money to come and have a lively energetic fun light concert and I was unable emotionally to give you that near the end of the tour.”

In 2017, Justin abruptly ended his tour for his “Purpose” album, “due to unforeseen circumstances.” Since then, the pop star has married American model Hailey Baldwin and now reveals that he is trying to fix some “deep rooted issues” in the aim of sustaining his marriage.

“I have been looking, seeking, trial and error as most of us do, I am now very focused on repairing some of the deep rooted issues that I have as most of us have, so that I don’t fall apart, so that I can sustain my marriage and be the father I want to be,” he wrote.

He also stated, “Music is very important to me but nothing comes before my family and my health. I will come with a kick ass album ASAP.”

The Nigerian national team, the Super Eagles, were once again victorious as they saw off Egypt in a friendly on Tuesday. Nigeria midfielder Paul Onuachu opened the scoring barely seconds after kick-off with a superb strike from the edge of the area. It was the player’s maiden goal for Nigeria and one that would not be forgotten easily.

It was another decent display from the Super Eagles who had made light work of Seychelles in their last game of the African Cup Of Nations qualifiers. The game had no implications though because Nigeria had since secured qualification to the AFCON scheduled to take place later in the year.

Nigeria dominated large parts of the first half carrying along the momentum of scoring an early goal. But the Egyptians came clawing back as they twice came close to equalising but were denied by the Nigerian substitute goalkeeper Ikechukwu Ezenwa.

Egyptian talisman, Mohamed Salah did not partake in the friendly having been excused since their successful qualification to the African Cup Of Nations, which they will host.

Rave-worthy Look Of The Day: Nomzamo Mbatha Is Rad In Ankara