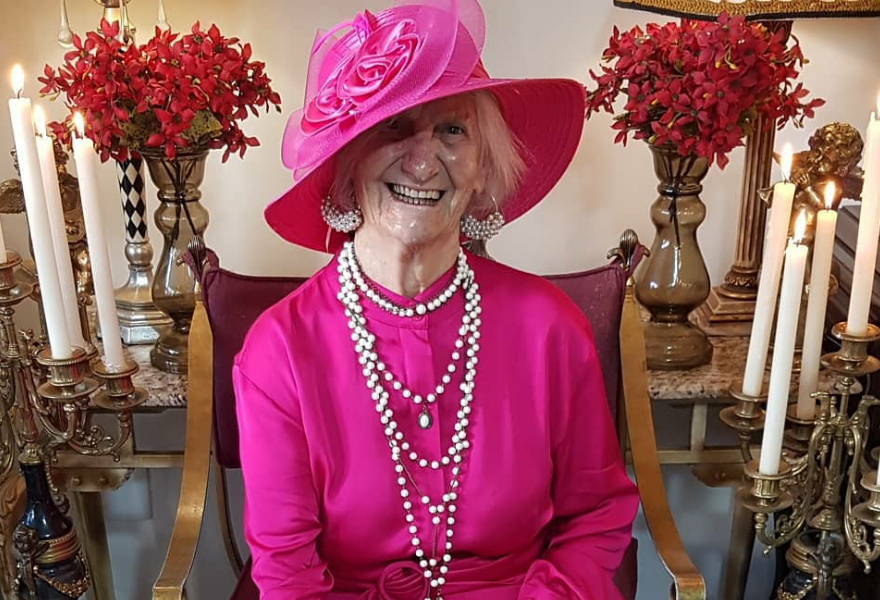 Izaura Demari, 79, the greatest Brazilian fashionista today, discovered her passion for fashion with the help of her youngest son, Marcio Demari.

Together, they travel the world panning, perfect clothes and hats to sign their posts and rehearsals, one more iconic than the other. That makes Grandma Izaura one of the greatest fashion influencers in the world, becoming a role model for many ladies.

However, on Instagram, with more than 66 thousand followers, with stunning looks and her robust hats, the always well-dressed lady gained national and international recognition, working with more than 25 brands, including 2Rios, Comfortflex Atelier Kaleb Aguiar, Joulik, and Reinaldo Lourenço. She has participated in several TV programs, has been featured in more than 300 national and 80 international magazines and portals. She made news in Africa, Italy, France, China, and the USA and paraded in SPFW by the Free Free Institute.

Her three children, five grandchildren, and three great-grandchildren are enjoying their fame, along with Grandma Izaura Demari.

Pictures in exuberant landscapes and laborious looks, in the style of bloggers. None of this is new when we are talking about an Instagram profile. But when these pictures are being taken and posted by a nice 78-year-old lady, it draws attention on social networks.

The digital influencer is Izaura Demari, who, with her extravagant combinations, already has more than 76 thousand followers on her social media. The Paraná-native profile aggregates pictures of her two passions: traveling and taking care of her looks. “I feel very happy [with the repercussion], very well. I like to take get dressed, going out to the mall, taking pictures with my friends,” says the influencer, who, thanks to all this hubbub, has already appeared in fashion magazines and TV shows. The idea of posting the pictures came out after the reaction people had with her style. She says that she was often approached while walking through the mall or down the street. As well as asking to take pictures with her, people began to question how they could follow her on social media. It was then that her son, 50-year-old Márcio Aurélio Demari, decided to create a Facebook page and an Instagram profile. The answer was instantaneous, and grandma Izaura, as she calls herself in the networks, has obtained 5 thousand followers in a single week.

“Every day has a striking moment.” There were so many special moments and so much affection from the people that Izaura is not able to list the better ones. “Ladies would even stop looking at artworks in museums to talk to me,” Izaura remembers from a trip she took to Gramado with her son. “Once, a woman saw her in the street and stopped the car just to hug her. She asked from which fairy tale she had come out of,” remembers the proud son. The lifestyle of the near-octogenarian has a positive influence on several other women. Those in her age group feel inspired to become more daring in their outfits and go out more. “This is a joy in my life, and I feel very happy,” she says.

Izaura used to cultivate orchids at her home. But since her husband died 16 years ago, and she moved to an apartment, she decided to rethink her routine. It was then that her passion for traveling came about. Four months ago, she moved once again to Florianópolis, the setting of many of her pictures. Her three sons, five grandsons, and three great-grandsons are taking advantage of the fame, along with Izaura Demari. They buy newspapers to show their friends and proudly show off their grandmother’s social networks. “My sister says: ‘mother, I can’t be like you!’”, says Márcio, laughingly.

Izaura’s trademark is her style, but the son points out that she focuses on different yet cheap clothes – and not expensive or famous brands. Including hats, kerchiefs, and turbans, she already has over 780 pieces of clothing. And she is not interested in minimalism. On the contrary – the influencer likes colors, high heels, necklaces, and large sunglasses. The rule is to have fun.