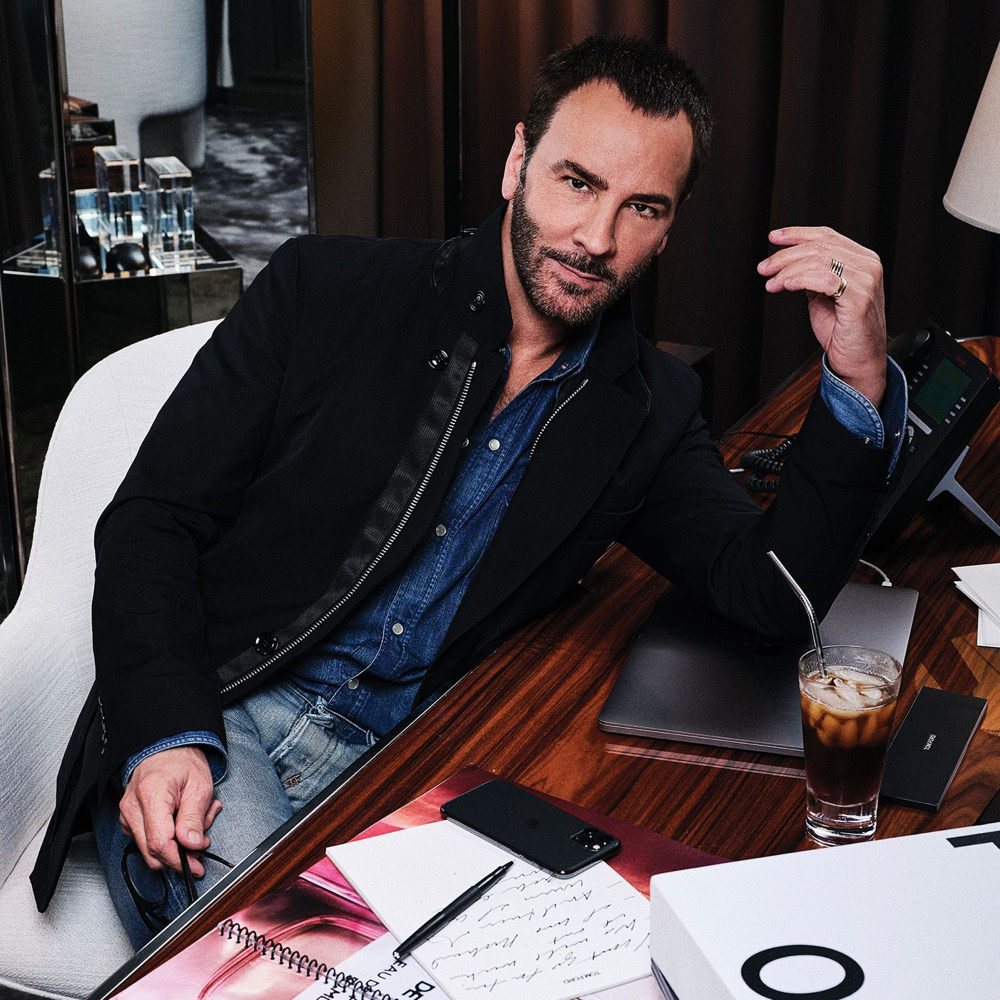 Tom Ford says he never thinks about his legacy. “I’m not someone who often looks back,” says the fashion designer, 60. “When I finish something, I push it back and I move on to the next thing.”  The rare exception might be his books.Tom Ford book

Tom Ford (2004) took stock of his time as creative director of Gucci and Yves Saint Laurent. Because it still “sells and sells and sells,” he says, he’s back with the 444- page Tom Ford 002, published in November, which covers the launch of his namesake company; the two feature films he directed (A Single Man in 2009 and 2016’s Nocturnal Animals); and his family life—the book includes a rare photograph of Ford’s son, Jack, now 9.

Ford was born in Austin, Texas, and grew up in the Houston suburbs and Santa Fe. At Gucci and YSL, he gained a reputation for understanding that sex sells, with provocative ad campaigns and no-holds-barred interviews. Today he is based in Los Angeles, where he helms the Tom Ford brand and serves as the chairman of the Council of Fashion Designers of America while living a quieter life with Jack.

In September, less than a month after Ford’s 60th birthday, he lost his husband and partner of 35 years, the fashion journalist Richard Buckley. Putting his new book together has made him more reflective. “It causes you to look at how much time you’ve had on the planet, how much time you have in the future, what you’ve accomplished, what you want to accomplish,” he says. Which isn’t to say he’s completely changed his rule about not lingering on the past. “I thought, OK, I’ll capture this time period, put that in a slipcover and move on and create the next chapter,” he says. “I’m someone who likes to tie things up and put a bow around them.” Tom Ford book

Here are some things Tom Ford revealed to WSJ. Magazine…

On the time he gets up on Monday, and the first thing he does:

I get up at 5:30. I make myself an iced coffee. At least four days a week, I  go down to the small gym in my house. I turn on CNN or MSNBC and run on the treadmill and do some push-ups and sit-ups. I don’t use weights, but I do body-resistance things, and I don’t do that for that long, maybe a half hour. Then I go upstairs and I lie in a hot bath with a second coffee. And sometimes time just goes so fast, and I realize I’ve been lying there for half an hour.  I get up that early so I can have peace and quiet before I get Jack up to go  to school. I’ve noticed that sometimes if he jumps up early and I don’t have that time in the bathtub to just think in the mornings, I’m not together all day long. I can really feel it. Tom Ford book

On his son Jack’s routines:

They definitely overlap with mine. Until recently, I had Richard to help me out in the mornings. It’s been a little bit of a struggle the last month because he would normally get [Jack’s] breakfast on school days while I was getting dressed. I’ve gotten pretty good at it. I guess I’ve added now to my routine at 5:30…. But it’s a challenge to get him up, dressed, get his lunch made, get his lunch packed, get his breakfast done, get all my things done, and then I drive him to school at 7:45. But it also means I’m at my office by 8:10, so I get a good start to the day.

On how many hours of sleep he needs:

On his go-to breakfast:

On the time of day he’s most creative:

In terms of being on and having my brain really going, I’m a morning person. I used to have a drinking problem, and in that period of my life, I was more of an evening person. But that has completely reversed. And maybe it’s also living in California. You know, everyone in California gets up early.  If you’re invited to a dinner party, it’s at 7 o’clock. When I lived in Europe, I thought that was so strange. You didn’t eat until 9 in Italy and maybe 8 or 8:30 in London. So that took me a while.  But I have found just living in L.A., life here is so much about your family and so much about being outdoors, and everyone gets up quite early, eats quite early, goes to bed quite early.

On his strict rules for his son’s wardrobe:

You know, I don’t let Jack wear shorts to school, and the other kids are in shorts. On the one hand, I feel that maybe I have to give into it just because I don’t want him to be ostracized because he doesn’t have on shorts. But I’ll say to him, “You’re never wearing shorts to school. Don’t ask again. Not happening. When you turn 18, you can wear whatever you want.” It was only recently that I let him wear T-shirts with stuff printed on it. Tom Ford book

On the one piece of advice that’s guided him:

Never take no for an answer. Ever. I hate plan Bs. I hate when people start a conversation and they say, “Plan A  is this, and plan B is that.” No, there’s no plan B.

I think I am, by nature, a more formal, old-fashioned person. You know, the other day working on responding to condolence notes and everything, I said to my L.A. assistant, “Get out Emily Post.” She said, “What is Emily Post?” I said, “What do you mean, ‘What is Emily Post?’ Get out a copy of Emily Post! Look at etiquette and see how we respond to emails.”

I mean, people in L.A., when you have a dinner party, the one thing I do not understand that drives me insane is couples want to sit next to each other. For me, the whole point is that you sit next to someone new, so when you go home and get into bed, you can dish about them. So manners in L.A. have taken me a while to adjust to.

On his love of correcting imperfection:

Sometimes you look back and you think, Oh, that was a terrible collection, and you realize you know why or what you were thinking at the time or what was happening in your life that made it that way. So there have been a couple of terrible collections. I’ve left them out of the book. That’s the nice thing about a book. You can edit what you did and leave out the things that didn’t work.

On what excites him most in his role as the chairman of the CFDA right now:

It has been one of the hardest things I’ve ever done, because the CFDA was founded really as a PR machine to support the American fashion industry, because when it started, most fashion came from Europe, and by the way, a lot of it still does. But over time, the CFDA— and I think this is in most businesses and nonprofit organizations right now—is dealing with all of the social issues that we have going on with inclusion, the #MeToo movement, Black Lives Matter. And that has taken over my work at the CFDA. I had intended for my main focus there to be making the CFDA and American fashion more international. I think that America is so inward-looking, and American fashion is also the same way. I had hoped to make American fashion designers more outward-looking. America has made a huge impact globally in style. And I don’t know that that is appreciated. But because of everything that happened socially, because of Covid, because we were trying to raise money to help young designers who didn’t have the funds to survive Covid…my role has developed more as a kind of response to those movements.

On the recent loss of his husband, Richard:

It’s been hard after 35 years, very hard. I keep thinking, Oh, God, I have to call Richard, or I need to send him a note about this. And he’s not here. Tom Ford book