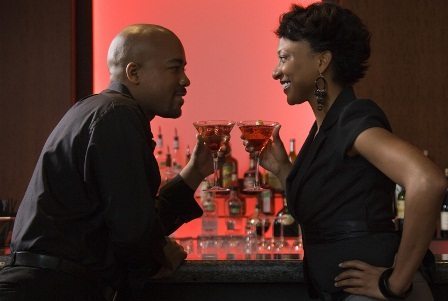 My friend, V, is a big risk taker.

For the past year or so, V has been seriously, zealously, aggressively looking for love… And she has become an active and consistent presence on the dating scene.

Like most women, V started out with a very specific list of the necessary criteria- the usual things- very tall, extremely fit, looks exactly like Tyson Beckford, great sense of humor, plays three different sports, went to college (on a football scholarship), has at least two post graduate degrees (on full academic scholarships), cooks well (from edikanikon with periwinkles to chocolate croquembouche), gives good massages (and willing to do so every night)- plus big house, big car… and of course, big money.

As time went on and V got slapped around by reality, the list changed (as it always does) to- “taller than me”, okay body, okay face, educated (“standard six” will suffice)… but of course, big money.

Recently, it had gotten pretty rough and tough out there and the list had been further narrowed to- not too short, not too fat. But anyhow sha- still big money… There were just some things that V could not compromise on.

So a few weeks ago, V called me to complain about one of her many disastrous dates. At the end of the date, V offered to pay for their meal. Of course, like almost every woman in a similar situation (Ladies, don’t lie, abeg…), she meant it like Bush’s promises re weapons of mass destruction… or JayZ’s annoucements re retiring from the rap game- just empty, meaningless words, uttered only because they sound nice. However, V got taken up on the offer. Mind you, that in and of itself did not make the date a disaster- it was the fact that as soon as he realized that she was going to be picking up the cheque, he suddenly remembered that he would not have time to leave work to go get something to eat the following day and asked the waiter to pack up something “quick” to go- an extra premium rib eye steak- medium well- with garlic mashed potatoes- loaded, creamed corn, coleslaw, chicken noodle soup with crackers, house salad… and of course, a couple of butter rolls too… All on V’s tab oh…

After her bitching- and my laughing- at this incident, V announced that she was going to take a new and improved approach to dating that was in keeping with the times- join an online dating site. I laughed even harder. She told me that based on her research, online dating site users were mostly rich guys who worked hard running big businesses and didn’t have time to go out and meet women the normal way. She said that according to her statistics, more than 120,000 marriages occur every year as a result of online dating. She was serious. V joined a dating site.

By the following week, she had met and started to talking to a guy who lived in the area. V listened for and heard those little details that indicated that he was doing pretty well for himself- he mentioned something about his boat, something about his beach house, and a couple things about one or two of his celebrity friends. Since V figured he had money, she ignored the fact that he looked like Jeffrey Dahmer on prozac. I, on the other hand, was 171% positive that he would serially kill her within the week. And call me stupid but what good is all the money in the world when you are in twelve different pieces in somebody’s freezer?

Shortly after they started talking, he asked V to meet him for dinner. I begged her not to go. Always the eternal optimist, hopeless romantic and undercover runs chick, V admonished me and informed me that love can be found with anyone, anywhere and at anytime… Even on a random website with the seemingly depressed and desperate look alike of a rapist, necrophiliac and cannibal? Na wa…

I convinced V to at least make it lunch instead of dinner, then I wished her the luck I was sure she would need and I sprinkled her with holy water. I also made a show of noting down all her birth marks and scars on a notepad- just in case I was later called upon to identify her headless body… She was still not dissuaded.

The afternoon of their date, he called her to ask that they meet up at the restaurant instead of him picking her up. V did not mind. She chalked it up to internet dating protocol. Afterall, who wants a random person they met online to know their home address?

When she got there, he was already there. He had arrived before her and gave her the opportunity to make an impressive grand entrance- five points. However, he looked like he hadn’t made much of an effort himself to dress to impress- minus 10 points. Still, everyone knows that poor dressing can be very easily fixed- especially if the guy has the money- so V let it slide.

When it was time to pay, V drew from her wealth of knowledge and experience on the dating scene and was sure not to let her mouth write a cheque that her ass couldn’t cash- she didn’t offer to pay. Unfortunately, it didn’t matter because apparently he had forgotten his wallet at home. Umm, is that supposed to be a joke? Minus five million points right there…

So anyways, V ended up picking up the tab. Again. She didn’t mind as much though because at least he was very apologetic and seemed extremely embarassed. Plus, he was decent enough not to order any extra meals to take home for future consumption. And he promised that he would make it up to her on their next date- he would take her to the revolving restaurant on top of the GM building- he knew the owners so they would get the best table and the most expensive bottle of wine. V didn’t want to seem like she was talking to him only because of his money and was unwilling to come out her own pocket in any situation, so she smiled, told him it didn’t matter and just paid for their meal.

He walked her to her car. Then he hugged her and kissed her. The vibe was incredible, he actually begged to come back to her place. V let him know that it was entirely too early to even go there.

Just as V was about to get in her car and be on her merry way, he asked her for a ride. Ah ah? He explained that actually, his friend had his Range and was supposed to pick him up but was running late and he couldn’t get in a cab since he didn’t have his wallet… and story, story… long thing… and so forth… so could she drop him off at home, please?

V agreed sha. It was broad daylight, he seemed nice enough, it was a really good kiss… And she was dying to see his crib with the 50 acre lawn.

After driving for about ten minutes, he asked her to drop him at a convenience store rather than at home. He said he needed to pick up some stuff from the store, and it was close enough to his home that he could just walk home when he was done. V knew he was lying- he was supposed to not have his wallet so he could not possibly be picking up anything at the store. But she went along with it because she figured he probably just didn’t want her to know where he lived yet either… Again, she chalked it up to internet dating protocol.

He kissed her again, promised to call her soon and got out of her car.

V drove up the road and just as she was about to round the corner, she looked in her rearview mirror and observed her date cross the street and walk into the Salvation Army homeless people’s shelter…

Turned out V had really just gone on a romantic date with a homeless guy. And even worse, she had kissed him. Twice. And this, boys and girls, is why you should not kiss on the first date.

V was distraught. I mean, it’s pretty messed up to discover that a guy who you are dating is begging to come over to yours and he is actually not trying to come to your house so he can sleep with you but really just so he can… well… sleep.

After drinking two bottles of Izal, V called me to tell me the story. I laughed to death then I woke back up and told her not to sweat it. Homeless people are still people… just not big money people sha.

These days, everybody and their dog has a cell phone and internet access… And you can’t blame a man for using his resources to put food on the table. It’s what we all do. You just can’t knock his hustle. Homeless people need love too. And, of course, free food.

– Koko Akan is a US-based Attorney and Writer. She’s written many real-life inspired jaw-cracking, emotion-invoking stories. She’s also authored two novels which are yet to be published. Visit her blog to read more. www.kokoakan.blogspot.com

A Tinder Love Affair: Tips To Staying Safe When Meeting Your Matches