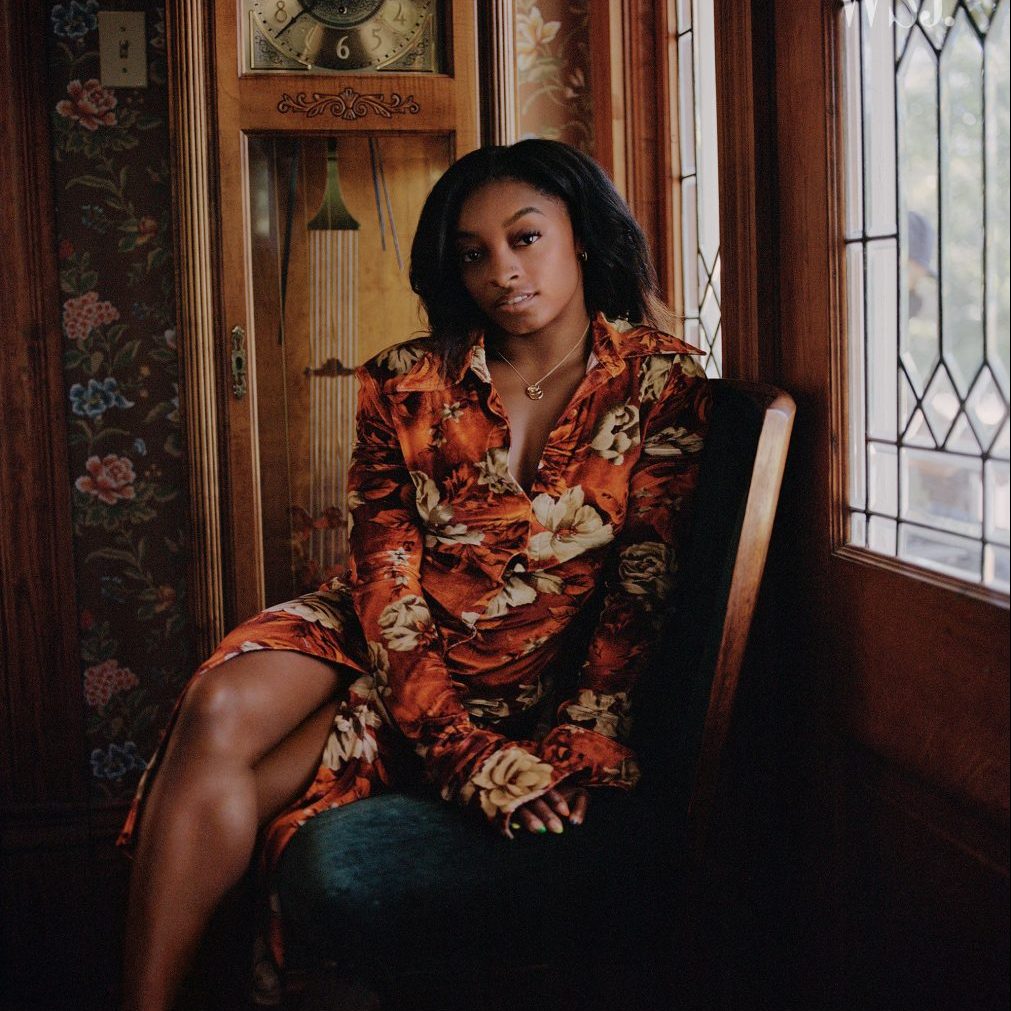 The world wants everything from gymnast Simone Biles, and she keeps on giving it. The 30 Olympic and World Champion medal winner pulls off some of the most difficult skills in gymnastics, much better than any of her competitors, and then, she umps it up again. Biles is currently the most decorated America gymnast and is widely considered to be the greatest and most dominant female gymnast of all time. Talk about a G.O.A.T!

Biles, 24, is already considered a gymnast veteran as gymnasts usually don’t stay in the game for so long, compared to other sports. However, this is not the case with the star as she will represent her country during the upcoming 2021 Tokyo Olympics, and she has also subtly hinted her participation in the 2024 Paris Olympics, by then she will be 27! Her skill, dedication and resilience debunks the assumption that late adolescence spells the end of a top gymnast’s career.

At the U.S. Classic held in Indianapolis a few months back, her first time under the bright lights after a 19-month pandemic layoff, she debuted the hardest vault in the history of women’s gymnastics—a Yurchenko double pike that lit up social media. She had a day off as she traveled back to Texas and was in the gym again the following day to prepare for the national championships a week later.

The Ohio born says that gymnastics, and the laser focus that training and competition demands, give her a chance to ignore everything else. “It gives me a break; it’s kind of my safe zone,” she says.

She’s had plenty to set aside. Over the past four years, Biles has pursued a comeback amid a devastating string of revelations about the sexual abuse that she and other gymnasts were subjected to by former national team physician, Larry Nassar.

She is the only self-identified Nassar survivor still competing at gymnastics’ highest level. Her dazzling performances bring undeniable glory to her sport’s governing bodies—USA Gymnastics and the U.S. Olympic & Paralympic Committee—organizations she blames for failing to protect her and her friends, and which she, along with approximately 200 other gymnasts, is suing.

On the verge of what was supposed to be a triumphant return at the 2020 Tokyo Olympics,  she suddenly found herself confined at home with way too much time to think. With the summer games postponed as a result of the pandemic, and Biles unsure of when she’d be able to compete again, doubts began to creep in. The seven times national all-around title winner told WSJ that she thought about giving it all up and didn’t want to keep going, least of all for USA Gymnastics. She admits she didn’t know whether she could make it another year, physically or mentally.

There have been other things on her mind, too. In a year when the nation erupted in protests after the murder of George Floyd, a different tragedy loomed over the Biles clan—an incident that resulted in murder charges against her brother, Tevin Biles-Thomas. Prosecutors had set out to prove that he was responsible for the shooting deaths of three men at a 2018 New Year’s Eve party in Cleveland. He maintained he was innocent.

When the siblings were in foster care together as young children, Tevin, who is almost three years older, had been Simone’s protector. He and an older sister were later adopted by a great-aunt in Ohio, and Simone started a new life in Texas, adopted with her younger sister by her maternal grandfather, Ron, and his wife, Nellie. Now Tevin was on trial, just as Simone was preparing to return to competition.

In mid-May, as Tevin’s trial got underway in Cleveland, Simone Biles and her family would talk often about the proceedings. As the jury was deliberating, Simone headed to Indianapolis; Ron and Nellie went too, to watch her compete at the Indiana Convention Center while awaiting news of the verdict.

There, on a Saturday, she debuted a new floor routine and the Yurchenko double pike: a roundoff and back handspring onto the vault table, propelling herself into the air to complete two back somersaults, bent at the waist, knees straight. She felt confident enough about how she’d done to dip into Twitter to watch the footage herself, sharing the clips with one of her coaches, Laurent Landi, and retweeting them in the process.

The following Monday, the judge presiding over Tevin’s case declared a mistrial. The jury had mistakenly received legal briefs discussing the extent to which he might have acted in self-defense, and the judge said the case would have to be retried in front of a new jury.

Nine days later, Biles was back in the arena for the U.S. national championships in Fort Worth, Texas. Her performance this time was no less astonishing. Holding back the Yurchenko double pike to preserve her ankles, she aced another difficult vault in her arsenal, the Cheng. She stuck a triple twisting-double somersault on the floor exercise, launching a fresh round of online clips that she enthusiastically shared again.

That she handily shatters new records while under crushing pressure may be the most extraordinary Simone Biles feat of all, one that reveals a psychic discipline she will summon again in Tokyo later this month: keeping her mind clear as she takes center stage, maintaining poise while her every move is scrutinized by judges and devoured by a global television audience before ricocheting across social media.

Here are some things Simone Biles revealed to WSJ. Magazine…

“You would never know, because we never discuss [Tevin’s case] outside the family,” Nellie Biles said in an interview while they were in Indianapolis. “Simone goes to work, I go to work, and you would never know that there’s something really mentally bothering us…, because we have our own jobs to do, and we go and we do those things.”

Biles on her remarkable rise:

Biles on worries she may have peaked in 2016:

“In 2016, I thought I’d hit the peak of my career, and I was like, ‘How can I get any better than that?’” Biles says. “And so I was really nervous walking into the gym,” consoling herself with the idea that 10 or 15 years later, she’d want to know she’d given it a shot. When she came back, she picked new coaches.

Cecile Landi, who, along with her husband Laurent, currently coach Biles, on their focus with the gymnast:

They brought Biles back to some gymnastics fundamentals. “She was young and she didn’t really need the technique; she had the power,” says Cecile Landi. To stay above everyone else—and maybe rise even higher—“she had to improve on her technique because that’s the only thing that’s going to keep you safe, especially when you get older.”

Biles on how she feels about performing gymnastics now:

“Now I can enjoy my gymnastics. It’s really up to me,” she says. “And that probably also comes along with how many titles I’ve won and everything I’ve established. It’s like, OK, well, the facts are on the paper. I feel like now I don’t have to prove anything to anybody…. I’m trying to level up.”

Cecile Landi on Biles’s opinion of the USA Gymnastics [USAG], which she is suing:

When the enormity of the Nassar scandal was first coming out, Cecile Landi says, she and Laurent had to adapt Biles’s training to account for the toll it was taking on her. “Nowadays, not so much,” she says. “She’s more able to put it aside.

“She talks to me a lot about how she’s tired of [USAG]. I keep telling her, ‘You know, you are not representing USAG; you are representing yourself and your country, and this is who you should worry about, and you don’t owe USAG anything,” Landi says. “But she’s more confident now that, ‘You know what, they screwed up and I’m not going to care what they have to say; I’m just going to do me.’”

Biles on continuing to speak out about the abuse she and her fellow gymnasts endured:

“In 2018 I kind of realized, ‘Wow, I’m one of the only remaining survivors in the sport,’” she says. “They can’t brush that under the rug, and they can’t stop talking about it.”

Simone Biles on her new boyfriend:

As the pandemic began, she started a new relationship with NFL player Jonathan Owens after spotting him online and sending a direct message.

“He would say I slid into his DMs. I saw him and I was like, ‘Oh, he’s pretty cute,’ so I said hi…and then I saw that he was in the Houston area, so we started chatting a little bit, and then we went to hang out a week or two later.”

After about three weeks of watching the two flirt, Biles’s sister Adria grabbed her phone while she and Owens were FaceTiming and asked if he was going to join a planned trip to a lake house. He came with his dog, an English bulldog, Zeus, who got on with Biles’s French bulldog, Lilo (Biles added Rambo, another French bulldog, to the mix during the pandemic). As fears of the virus eased and warmer weather came, the Bileses’ Sunday-evening dinners resumed, in person and outdoors. Owens was invited to join.

Biles on her activism and deciding when to use her voice:

“We can have a voice for things that we believe in, rather than just focus on the court, focus in the gym. We’re human too.”

“Everybody expects me to speak out, but I kind of do it whenever I’m ready, in a good mental place, because it is a lot at the end of the day, and it does spark a very big conversation,” she says.

Biles on looking beyond gymnastics:

“I feel like for all these years I’ve kind of let gymnastics do the talking, and I’ve kind of stamped my position there,” she says. “So at the end of the day, I can say I’ve done it all, and more.”