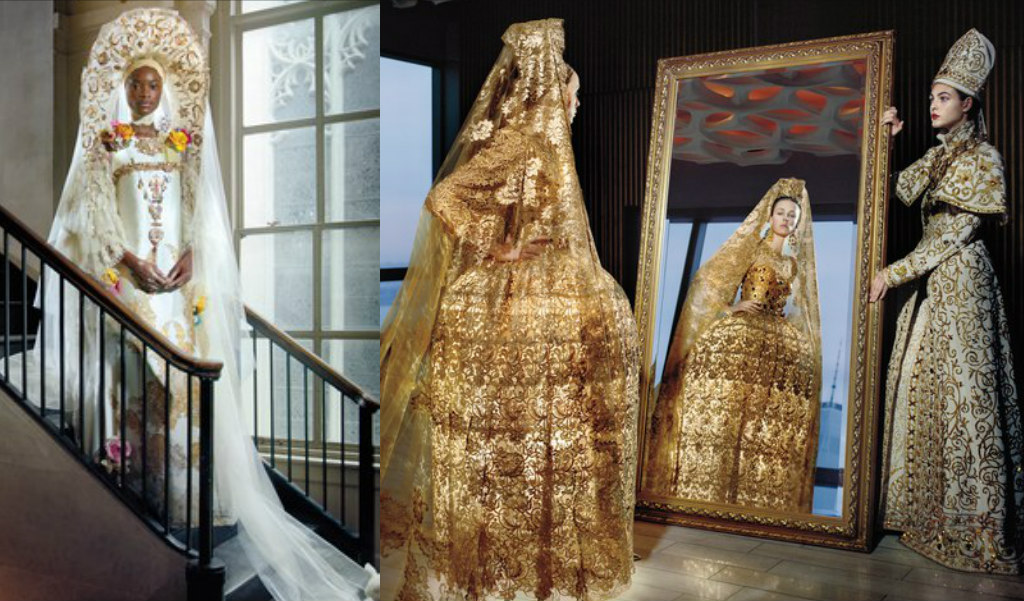 Mayowa Nicholas shot to fame when she was scouted by The Elite Modelling Agency Nigeria and since then her career has come along in leaps and bounds. From strutting the globe in various designer wears, she now features in a US Vogue editorial to introduce this year’s MET Gala and its controversial theme “Heavenly Bodies: Fashion and the Catholic Imagination.”

Each year, the MET Gala gets bigger and better with a new theme for each year. When this year’s theme was announced, it was initially met with apprehension with religion being a very delicate subject.

The majority of fashion designers on display in the MET Gala “Heavenly Bodies” were raised or educated Catholic. Christianity, as interpreted by the Costume Institute, means mixing the sacred and profane. There will be ecclesiastical garments on loan from the Vatican jostling for attention against high fashion by the usual suspects: Dolce & Gabbana, Versace, Chanel, Balenciaga and Valentino among them. Fashions from the early 20th century to the present will be shown in the Byzantine and medieval galleries, part of the Robert Lehman Wing, and at The Met Cloisters.

Anna Wintour, however, has expressed that everything has been handled in the most sensitive way and this year, fashion will meet Catholicism with help from the Vatican as the grand exhibition gets underway.

In her May Editor’s letter, Anna Wintour writes:

“The exhibition itself has been years in the making, and it will be not only the largest Costume Institute show to date but the biggest show ever at the Metropolitan Museum of Art. It’s hard to not sound hyperbolic about it, but it is going to be an absolutely magnificent experience—spanning some 26 galleries and including work from the likes of Valentino, Gaultier, and Dolce & Gabbana along with more than 40 extraordinarily opulent liturgical garments and accessories on loan from the Vatican. In the end, the Vatican has been an incredible partner on this show, lending pieces that have been rarely, if ever, seen. One tiara, anointed with 19,000 gems (of which perhaps 18,000 are diamonds), is a masterpiece. Writer Maureen Dowd has crafted a terrific personal essay about the show, which accompanies the sitting by photographer Philip-Lorca diCorcia and Executive Fashion Editor Phyllis Posnick. Maureen’s words underscore the unique experience “Heavenly Bodies” offers: the visceral thrill to be had from a show that connects deeply with faith, history, and creativity.”

A look at some of the outfits in the collection

These 5 Songs Are Currently Sweeping The International Music Scene