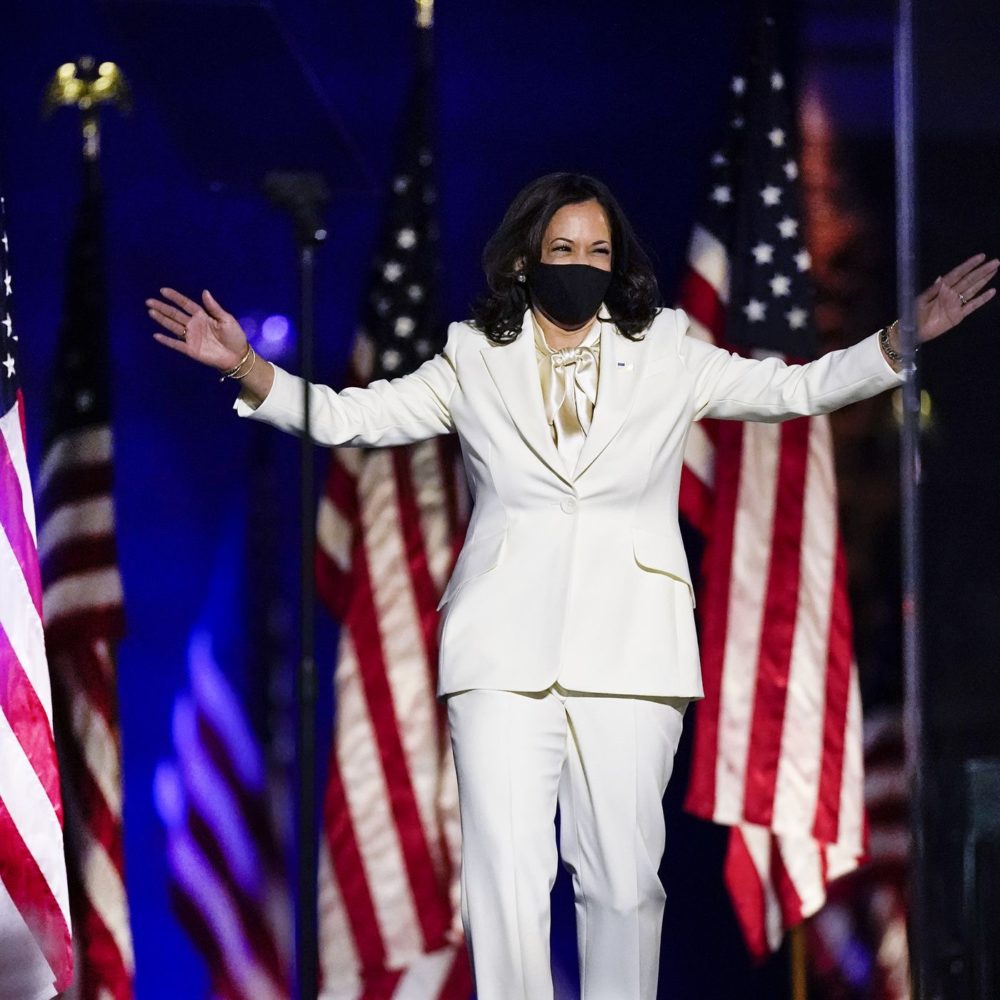 Former California senator Kamala Harris made history on Saturday when she was announced the United States Vice President-elect. She will be America’s first woman vice president. But that isn’t the only reason why she is making a buzz on the internet. Kamala Harris Height.

The world is watching all things Kamala Harris including her style. And everyone wants to get the deets on the white pantsuit with silky pussybow blouse, which she donned on the night of her victory speech in Delaware.

During her victory speech with Joe Biden on November 7, 2020 for the 2020 United States Presidential election, Kamala Harris spoke to the nation dressed in a pant suit which is usually her go to style, nude heels and signature pearl earrings. The outfit, designed by American designer Carolina Herrera was nothing short of significant as it referenced American suffragettes – the feminist movement who fought for women’s rights to vote and participate in politics. In her speech Harris assured the countrythat she would not be the last. Is Kamala Harris married? Her height?

“I am thinking about the generations of women — Black women, Asian, White, Native American women — who throughout our nation’s history — have paved the way for this moment. Women who sacrificed so much, including the Black women who are often overlooked, but have proved they are the backbone of our democracy.”

It should be noted that white has long been associated with the women’s suffrage movement. No better year to pay tribute to the movement than this year, which marks the 100th anniversary of the passage of the 19th Amendment giving some women the right to vote. Find out Kamala Harris height and more.

The fashion label, Carolina Herrera, which is known for dressing First Ladies including Laura Bush and Michelle Obama, is an American luxury brand founded by a Venezuelan immigrant of the same name.

The floppy and flouncy bow around the collar of Kamala Harris’ silk shirt also has a symbolic feminist meaning. It served as the working woman’s equivalent for men’s traditional shirts and ties in the early-mid 20th century when women got the right to work. It also references Emma Stone’s “Don’t Grab My Pussy Bow” take in support of Hillary Clinton following the leaked Trump tape.

More recently, it was worn in solidarity in Sweden after Sara Danius, the permanent secretary of the Swedish Academy, was ousted after a #metoo scandal rocked the academy. When people talk about the pussybow blouse now, they reference Margaret Thatcher, who popularized the style in the 1980s as the UK’s first female prime minister.

The most important takeaway of the speech isn’t just Kamala Harris’s style. The Vice President-elect has now risen higher than any other woman in American leadership and changed the course of history. It’s a long overdue moment, one that we should all be proud of.

Watch the video of her speech…

The questions on everyone’s lips:

Yes, she is. Kamala Harris’ husband, Douglass Emhoff, is an entertainment lawyer and is set to become the first-second gentleman of the United States. Her step-children, Cole and Emma Emhoff are from her husband’s first marriage to Film producer, Kerstin Emhoff.