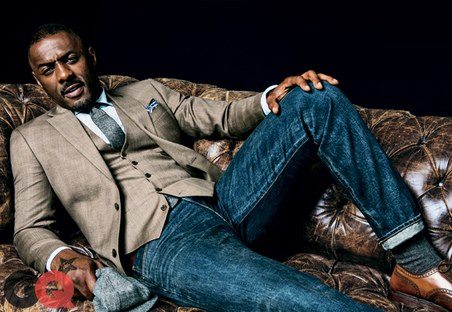 British actor (of Sierra Leone and Ghanaian descent), musician and DJ, Idris Elba is best described as the “modern day renaissance man.” The 44-year-old hunk who recently featured on the cover of Esquire Magazine, August 2017 edition and the front page of Essence Magazine oozes sex appeal without even trying. I mean is there anything sexier than a 44-year-old who looks this yummy?

The award-winning actor rose to fame by playing the role of detective “John Luther” in the eponymous BBC thriller Luther and also starred in top-grossing movies like Gangsters, Thor, Pacific Rim, Thor: The Dark world, Obsessed, Takers, Daddy’s Little Girls, Prometheus, Avengers: Age of Ultron and many more. He is also popular for playing South African President Nelson Mandela in the biographical film Mandela: Long Walk to Freedom, a portrayal that earned him a nomination for Golden Globe Award for Best Actor. In 2016, he won the SAG Award for his roles in Beast of No Nation and Luther.

Alongside a successful acting career and a well rounded musical career: The actor is no stranger to style. He won the GQ Best Dressed Men in 2015 and scored a fashion collaboration with Uk-based clothing brand Superdry which makes his foray into the world of fashion more fluid and plausible.

Idris Elba consistently impresses with his ability to look cool and stylish at all times with little to no effort. His style is best expressed, he says in “charismatic and easy to wear gear”. Whether he is spotted repping his signature laid back style, a dapper figure on the red carpet or looking suave in a Gucci suit, Idris Elba remains an ageless eye candy and we are definitely crushing hard.

See some of our favourite photos of the British hunk below….