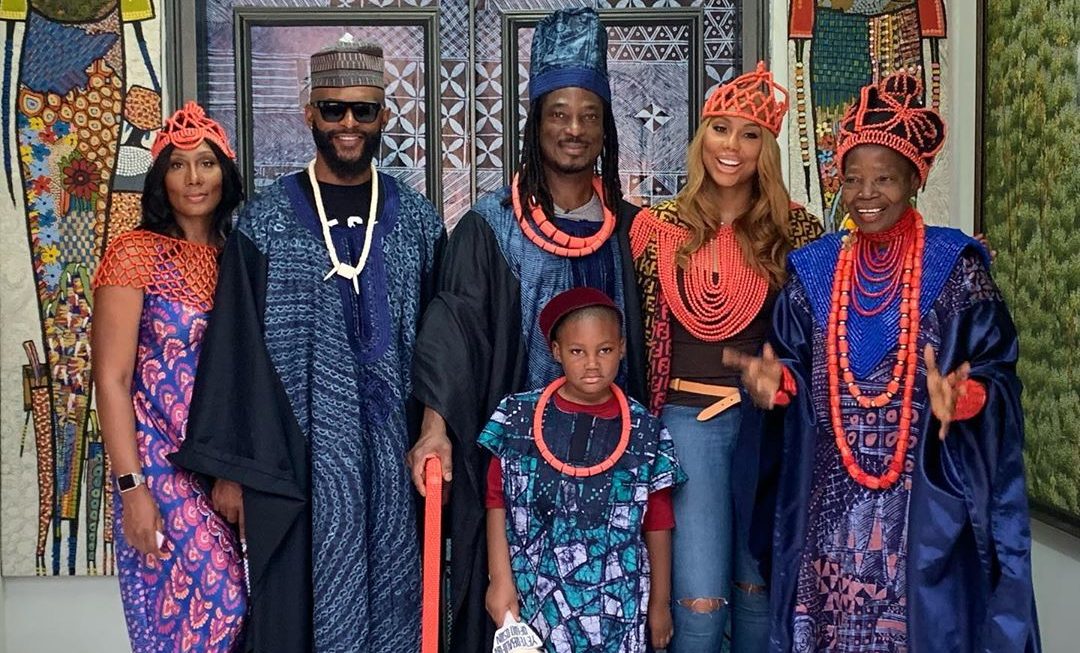 It’s no longer news that popular singer, songwriter and reality TV show star Tamar Braxton is dating Nigerian-born banker and business man, David Adefeso. What’s news however, is the duo’s ongoing trip to Nigeria, which has been dubbed a sort of homecoming for David and his American princess.

The two have been dating for over a year and celebrated their one year anniversary last month.

On Saturday, 27th July, Tamar shared first pictures of her trip to Nigeria with her boyfriend, David, her son – whom she had with ex-husband, Vince Herbert, Logan Herbert, her sister Towanda Braxton and her sister’s man, Sean Hall.

Since her relationship with David became a major thing, it has become evident that Tamar Braxton is not only loving Nigerian music but the entire Nigerian culture as well. The last born of the Braxtons and her family visited the Nike Art Gallery, where they were greeted with traditional songs and dances. It’s obvious that Tamar, David and others present enjoyed every minute of it.

My baby say he gone have a good time🇳🇬🎯 @david.adefeso

So far, Tamar Braxton has hung out with some of her favourite Nigerian singers including Teni, Simi, Mr. P of the defunct P Square and others. The group spent quality time in Mr. P’s residence where they sang and discussed at length. Some time ago in a video, the singer let us know that Teni is her new favourite artiste and she’s learning Yoruba language on the side so she can sing her songs.

Tamar, David and the rest of the gang also attended a wedding and went on to party Lagos style at the Hennessy Party over the weekend. Among other activities, Tamar was also spotted at a beach house after taking a romantic speed boat ride with her boo thang.

He took me home to the king 👑

She announced her new song with Nigerian singer and songwriter, Simi and also talked about her reality TV show as well as her love life with media personality, Kachi Offia at AriseTV headquarters.

Tamar and family at a Nigerian party

Tamar in conversation with Kachi

It appears parts of Tamar’s homecoming trip to Nigeria are being filmed but it’s unclear whether the trip will be featured on the Braxton Family Values.