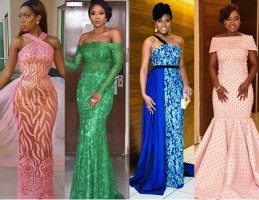 Listen Up! Double Dose Remixes By Praiz To Celebrate His Birthday | New Music

he fifth edition of the prestigious Africa Magic Viewers’ Choice Awards (AMVCAs) which was hosted by IK Osakioduwa and Minenhle ‘Minnie’ Dlamini held on March 4, 2017 at Eko Hotel and Suites, Victoria Island Lagos. The red carpet section which saw celebrities show up in their absolute best was hosted by Eku Edewor, Nick Mutuma, Helen Paul and Uti Nwachukwu.

The film, ’76’ emerged the Best Overall Movie with Rita Dominic taking home the award for the Best Actress in a Drama.

Best Actress in a Drama – Rita Dominic for 76

Best Actor in a Drama – Sambasa Nzeribe for Slow Country

We Can’t Have Enough Of Temi Dollface And Her Vintage Swagger: Lookbook

Listen Up! Double Dose Remixes By Praiz To Celebrate His Birthday | New Music

ICYMI: These 17 Wedding Guest Looks Are So 2020 And SR-Approved