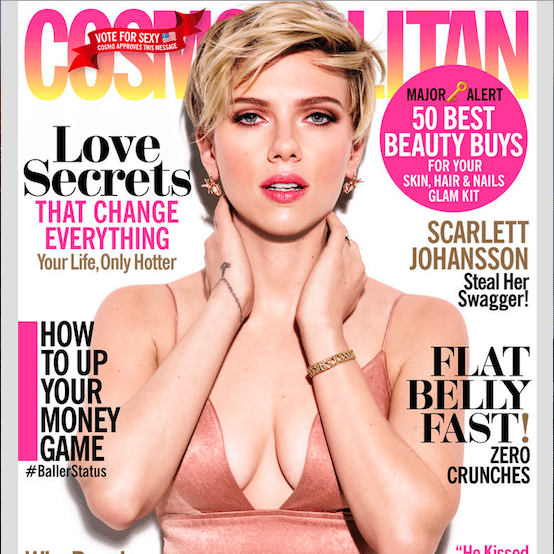 Hollywood sweetheart, Scarlett Johansson is simply wow on the cover of Cosmopolitan’s May 2016 issue. For the first time in nine years, the actress returns to the magazine’s front page looking as gorgeous as ever. Inside, she gives a no-holds-barred interview where she dishes on losing and finding love. In the interview, the mother of one who’s married to Romain Dauriac gives doses of wisdom and takes a look back at her staggering Hollywood evolution.

On why it’s tough to date other actors: “The logistics of being with another actor are challenging. There has to be a real understanding of how you share your time, especially when two people’s careers are going at the same rate. Or even if one person is more successful than the other, that also proves challenging. There may be a competitive thing.”

On “fighting” with her husband Romain Dauriac: “My husband had this idea for an app and was like, ‘We should pitch this to Shark Tank!’ . . . He was like, ‘What? You mean it wouldn’t pass the Sharks?’ I was like, ‘Were not gonna get into a fight over this!'”

On settling down in the suburbs: “It seems wonderful to be raised in a natural setting, but I wouldn’t know how to do it . . . a big city would always draw me back.”

On being a big city girl: “We’re both street rats. Being a New Yorker is a part of your personality, and he grew up in the heart of Paris. Just surviving the urban jungle is character building . . . It stays with you forever.”

On falling for the wrong guy: “Long, long ago, I had someone in my life who was forever unavailable . . . but, like, so attractively unavailable. You have to get to your breaking point . . . rock bottom is the moment when you’re like, ‘I’ve lost myself. Why am I standing outside this bar at 1:30 in the morning texting while my friends are inside? Or taking a taxi to see him at some ungodly hour? This isn’t me.’ That is the moment you’ve gotta cut it off. Otherwise, it will keep coming back, suck your blood.”

On why she dislikes discussing equal pay for women: “There’s something icky about me having that conversation unless it applies to a greater whole . . . I am very fortunate, I make a really good living, and I’m proud to be an actress who’s making as much as many of my male peers at this stage . . . I think every woman has [been underpaid], but unless I’m addressing it as a larger problem, for me to talk about my own personal experience with it feels a little obnoxious. It’s part of a larger conversation about feminism in general.”

On why she opposes Planned Parenthood’s budget cuts: “There are countries at war, there’s terrorism, global warming, and we’re like, ‘We should definitely cut the budget for Planned Parenthood. Let’s take away the availability of women’s health initiatives!’ . . . It’s nuts. We’re talking about preventing cervical and breast cancers. Growing up, I used [PP’s] services. All my girlfriends did — not just for birth control but for Pap smears and breast exams. You read about the rise of back-alley abortions, women having to mutilate themselves and teenagers having to seek help in unsafe conditions, and for what?! We’re moving backward when we’re supposed to be moving forward.”

Video: How to Get Flawless Skin – Tips That Actually Work